You are here: Home / Competition / USA Shooting Team Together And Ready to Take On The World In Tokyo 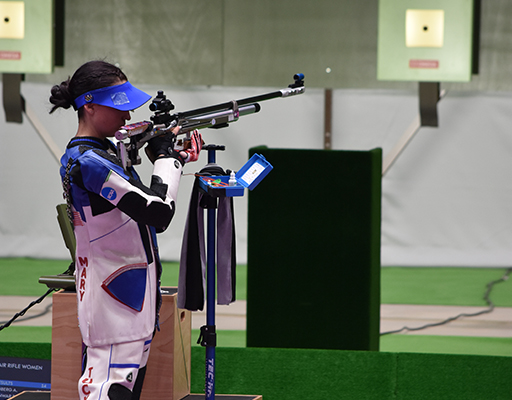 Tokyo, Japan- The members of the United States Shooting Team have all arrived in Japan and completed their first days of official training for Olympic Games Tokyo 2020. Rifle and pistol athletes were the first to arrive with shotgun following a few days later.

“I’m so glad all of the shotgun shooters arrived in Tokyo and have entered the village. That’s step one,” said National Shotgun Coach, Jay Waldron.

The arrival procedures at the Tokyo airport were lengthy, but the unique Olympic experience and new swag at the village awaited the athletes right after. Everyone is in high spirits at the range and in the village, gelling together now more than ever with the Games less than 24 hours away.

“There’s not much more to say other than they’re ready. We’ve had good training leading up to this, everyone’s worked hard and they’ve worked smart. Our team is ready,” said National Rifle Coach, Dan Durben.

Weather in Japan this week averages about 90 degrees with significant humidity, so it’s not surprising to see rifle suits spewed out across walls and pathways trying to dry out in the direct sun. Despite these extreme weather conditions, the U.S. athletes have settled in and are adjusting well to the weather and scenery.

National Pistol Coach, Jason Turner said, “Being that nobody has been here before we’re getting a feel for the range. Things like figuring out lighting conditions among others. We’re getting it dialed in and I’m feeling great about how training is going so far.”

Training looks different for everyone, including Mary Tucker who joined seven other male and female shooting athletes from around the globe to compete in a 10m air rifle “practice finals” in the Asaka Shooting Range Finals Hall. To top it off, six-time Olympic Medalist, Kim Rhode, chatted with Tucker before the match and stayed throughout its entirety to cheer her on. Rhode mentioned some friendly banter took place prior to the practice between Tucker and male competitor, Alex Hoberg of Australia.

“I think it’s awesome that the world has come back together for the Olympic Games since it’s been about a year and a half. My guys have been excited to catch up with people they haven’t seen in a long time, and I think that’s the spirit of the Games to me,” added Turner.

Shooting at the Olympic Games Tokyo 2020 includes 101 Nations, 356 athletes, and 447 total starts. USA Shooting represents 20 of those athletes and 22 starts.