You are here: Home / Features / We Test the Brocock Bantam .25 Caliber PCP Rifle 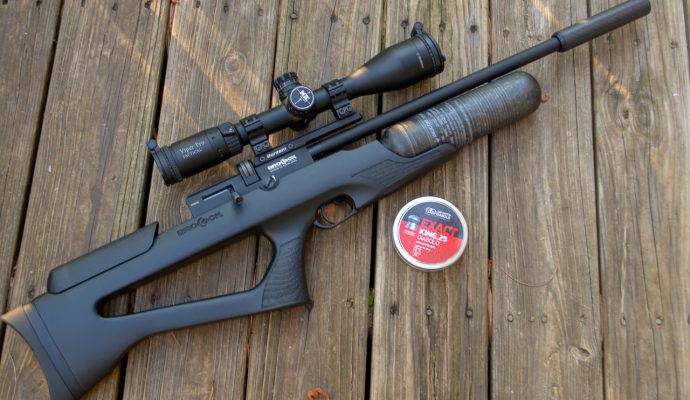 Sometimes compromise is a good thing. While it never seems to happen in politics, fortunately for us it functions to good effect in the airgun world.

The Brocock Bantam is a semi-bullpup rifle. There’s the compromise, and in this case, everybody certainly wins. A true bullpup design sticks the action way back in the buttstock area to shorten the rifle to a compact overall length. That sounds great, but it comes at a price. One challenge is that the magazine area is right in your face. Another problem is that it’s tough to design a high-quality trigger system. The trigger remains forward in the usual position but must connect to the action way, way back in the stock. That requires long and complicated linkages. A light and crisp break? Not usually.

With the Brocock Bantam semi-bullpup configuration, the action is moved back to a point just behind the trigger and well forward of the buttstock. It works. The rifle remains compact with an overall length of only 34 inches (36 with the optional silencer), and the trigger remains light and crisp. The magazine is also about five inches in front of your nose, so it’s accessible.

The Brocock Bantam is an evolutionary stepchild of the Brocock Compatto series. Compatto shooters wanted more power and more shots per fill. Those two changes pointed to the addition of a carbon fiber air bottle up front to replace the integral reservoir. Adding all that air capacity had a bit of a ripple effect as a new fill port was required along with movement of the pressure gauge. One thing led to another, and the stock had to be tweaked and reconfigured to fit these “minor” changes. The Bantam was born. So, it shares a heritage with the Compatto but brings plenty of new features to the table.

The Bantam features a shrouded Lothar Walther barrel to help reduce noise. You can order the Bantam in that base configuration or with the addition of a carbon fiber silencer attached. That’s the version shown here. The Bantam is available in .177, .22, and .25 calibers. Since bigger is better, we elected to test out the .25 caliber model. Because boom.

As hinted by the photos and the massive air reservoir, the Bantam is a pre-charged pneumatic (PCP) rifle, so you’ll want an external air source. We’ve been using it with an Omega Air Cylinders 75 cubic foot tank that holds 4,500 psi, so we’ve not had a problem keeping the Bantam chock full of air. The 480cc air bottle is located under the barrel and integrated with the fore-end. The fore-end does extend almost halfway along the bottom of the reservoir and is naturally placed for your support hand. I didn’t find a need for the stock to extend any farther forward.

The Bantam has an interesting filling system. The rifle uses a Foster connection, which usually presents an ugly protrusion from most air rifles. On the Bantam, it’s an “innie” as the fill port is recessed within the stock just forward of the trigger. If you’re thinking through logistics at this point, that shouldn’t work as you need to operate the catch on the fill hose female Foster connection to attach and detach it. That’s hard to do when everything is buried in a hole. Brocock includes an extension collar for the fill hose connection that elegantly solves the problem. The result is a rifle with no fill port sticking out and a nice smooth stock surface. There’s also a magnetic cap that covers the port when not in use. Nifty and elegant.

In the US, you can fill the Bantam to 240 BAR which translates to 3,480 pounds per square inch. In the .25 caliber rifle shown here that will get you 25 shots give or take before you’ll want to top off the onboard reservoir. To keep tabs on the pressure when filling or shooting, there is a small gauge on the left side of the stock just above the trigger. It’s easy to read with its color-coded yellow, green, and red zones. Just a heads up, the red zone is marked for the UK maximum fill of 200 BAR so don’t worry that you’re going above that if you live in an area where it’s legal – the Bantam is built to handle a full 240 BAR.

The Bantam uses a traditional bolt on the left side of the receiver. Just pull up and back and be sure to overcome the cocking resistance towards the end of the cycle. You can use a self-indexing 10-round magazine or the single-shot tray; both included with the rifle. As the Bantam has a breach seal gasket just inside the chamber, you’ll want to avoid getting too enthusiastic with bolt operation or else you might shove the rubber seal out of place with the advancing pellet. I might have done that in the excitement of my first shooting session, but I’m neither confirming or denying that I had to use one of the two included spare seals. Hypothetically, if that did happen to me, I would have popped the barrel off to replace it. You can do it without removing the barrel, but the barrel mount is super simple and took just a minute. I consider that a handy feature as it facilitates easy cleaning.

I did like the magazine system – a lot. Air rifles tend to have weird magazines that can require strange gyrations to load and unload. This one is simple. Drop a pellet into the big hole and rotate until you hear a click. The magazine self-locks into position at each of the 10 locations. It’s the most idiot-proof magazine system I’ve seen. The single-shot tray was easy to use as well, especially with the large .25 caliber pellets tested.

The safety on the Bantam is a paddle lever inside the trigger guard. As a right-hander, I pushed it towards the left side of the rifle to fire. Speaking of the trigger, it’s a two-stage adjustable model. Just right of that is a power selector. This .25 caliber rifle had two levels, high and low which can be changed shot to shot. I believe the .177 and .22 caliber models have a three-position selector.

Finally, the stock is adjustable for comb height and length of pull. The stock is also pre-drilled for sling swivel attachment front and back. The front one will allow secure attachment of a bipod if you like. The stock on this model is the polymer “Soft Touch” but you can order a Bantam with an attractive Beech stock too.

The folks at MTC Optics provided a Viper Pro Tactical scope for testing with the Bantam. It’s a 3-18x50mm scope. It’s loaded with features, so we’ll take a separate up-close and personal look at it later. For now, know that it will focus from 10 yards to infinity, is crystal clear and bright even at maximum magnification, and has an illuminated reticle.

I tested the Bantam with JSB Exact King Diabolo pellets and H&N Sport Barracuda Hunters. The JSB pellets weigh in at 25.39 grains while the H&N’s are a bit heavier at 27.47. I did run them both through my chronograph and got average velocities for the JSBs of 674.0 feet per second. The H&N Barracuda Hunters clocked in at 636.6 fps. That translates to 25.6 and 24.7 foot-pounds of energy respectively.

For accuracy, I did most of my shooting at 20 yards. Five-shot groups for the JSB Exact pellets measured from .22 to .31 inches, center to center. The H&N Sport Barracuda Hunters weren’t quite as accurate with groups ranging from .52 to .55 inches. I did shoot the JSB Exact pellets from 50 yards and got an impressive five-shot group measuring just 0.71 inches. Not too shabby at all!

The Brocock Bantam is a sweet handling rifle. The compact semi-bullpup design balances beautifully. Craftsmanship is exquisite. This feels far more expensive than its street price tag. I’m in the midst of a struggle as to whether to keep this one or buy one in .22 caliber. Then again, a .177 would be perfect for backyard use… Tough call.

You can pick up a Brocock Bantam from Airguns of Arizona for $899.99. If you want the carbon fiber moderator, add another $99.