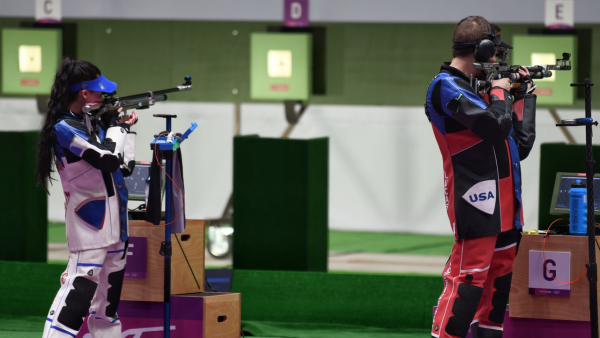 Losing to the team from the People’s Republic of China of Qian Yang and Haoran Yang, 17 to 13, the Americans picked up its second medals in air rifle of the games, William Shaner won gold in the Men’s 10m Air Rifle on Sunday.

The finals came down to the Chinese team showing a lot more horsepower than the Americans, H. Yang the most consistent of all four shooters recorded a 10.9, 10.8 and two 10.7’s, out of 11 points, making it difficult for American side.

At one point in the middle of the match, the USA won six consecutive points and were up 9 to 5, but the coach from China took a time out, went to Quian Yang, having a brief discussion and then when the match resumed, China won 12 of the next 16 points.

“It was a pretty hard final,” Tucker, the sixth-place finish in the individual event said. “Going into it, we were up against China. Both of them (China team members) had medals coming into it. Both of us were in those finals but we didn’t come away with the medals, so there’s that aspect of wanting to show everybody that we can still beat everyone else.”

The U.S. team got to the finals after a gritty performance in the second round of qualifying, defeating a team from the Republic of Korea by just 0.5 points, 418.0 to 417.5.

Tucker, who just turned 20, July 20th, was the aggressor in the second qualifier, outscoring her partner 209.3 and 208.7, which was the difference in moving on to the gold medal match.

“We definitely trusted each other, I was watching his score and I just saw consistency and I knew that my scores were consistent as well,” Tucker said. “Lucas had a better first qual and I had a better second qual, and then in the final we were pretty even. So, it’s about knowing your teammate, trusting your teammate and knowing that if you do have a little bit of a stumble, they’re going to pick you up and vice versa.”

The 26-year-old, Kozeniesky agreed that teamwork was the key.

“The teamwork is the accumulation of years of work and being around the other person and understanding what they do,” Kozeniesky said. “That way, when you are in the situation in the mixed team event, you can shoot with each other, trust that the outcome is going to end up being OK.” 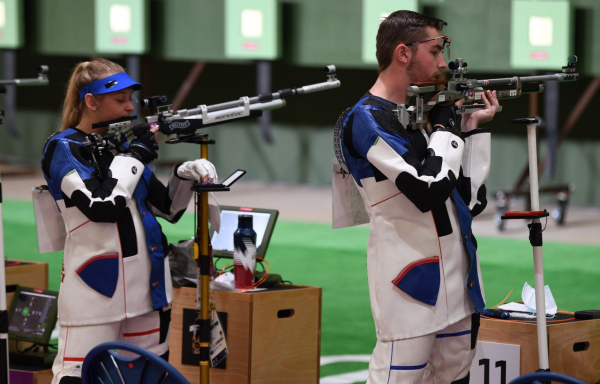 The other American team of Allison Marie Weisz and Men’s 10m Air Rifle gold medalist William Shaner, made the second qualifier as well.

Shaner had the second-best score of 210.3 in the second qualifier, but teammate Weisz struggled with a 206.5, placing the team into sixth place.

“Little more pressure, score wise, it still took a really high score to actually made the final,” Shaner said of his USA Team two’s finish. “We did the best we could, I shot the best I could, I would change a thing about it.”

The last medal for the USA in a team event was 1924 in Paris when the USA took mixed trap.