You are here: Home / Features / We Check Out the GAMO Swarm Maxxim Air Rifle 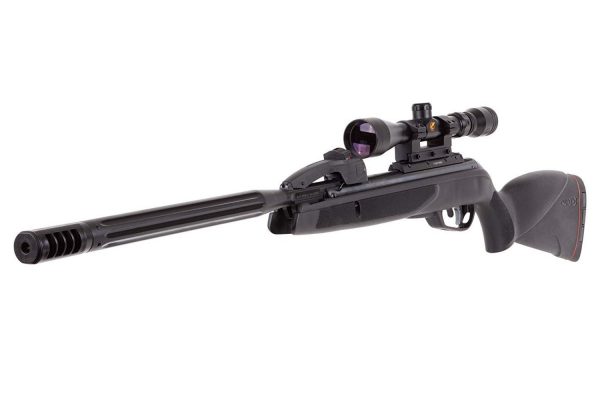 Here’s an interesting thought. How about designing a break-barrel repeater? At first glance, it may seem a little strange to stick a 10-pellet magazine on a break-barrel rifle like the Gamo Swarm Maxxim air rifle does. After all, you’ve got to cock the thing between shots anyway, so what’s the big deal about dropping a pellet into the chamber while you’re at it? As it turns out, once you try it, you’ll not want to go back to single-pellet loading. Let’s take a closer look.

Break-barrel air rifles aren’t new. Magazine-fed air rifles aren’t new. What is new is the idea of sticking these two features into the same rifle. The Gamo Swarm Maxxim features a rotary magazine that rests in a carrier over and just behind the chamber. The magazine loading assembly is fixed to the breaking portion of the barrel and connected to the receiver via wires. The result is that when you break open the barrel, the rotary magazine advances. At the very bottom of the cocking stroke, an internal plunger pushes a fresh pellet into the chamber. There’s a window on top of the magazine that shows you how many pellets are remaining, so you don’t have to count your shots to know your remaining capacity. Remember, that’s the magazine status, not the chamber status, so there is still one shot ready to go when the indicator reads empty. Of course, spare magazines are available, and you’ll want to stock up. Load a pile ahead of time, and you can focus on shooting rather than refilling magazines.

We’re dealing with autoloading tiny, lightweight pellets that can become deformed from distant sneezes, so consistent technique is important for reliable feeding from the magazine. The secrets to success are to make sure your cocking technique is smooth and complete and to keep the loading plunger clean and free of debris like pellet residue and dirt.

The Gamo Swarm Maxxim is available in .177 and .22 caliber versions, both carrying a manufacturer’s suggested retail price of $199.99. The Swarm Maxxim’s use Gamo’s Inert Gas Technology to store converted mechanical energy from the cocking motion. No springs, no “sproing!”

The barrel is a fluted polymer exterior with a jacketed-steel liner. It uses Gamo’s middle range noise reduction system – Whisper Maxxim. That has two chambers behind the muzzle that help tame noisy and turbulent gasses before they exit. While sonic cracks aren’t an issue with the .22 caliber model, you can easily surpass the sound barrier when using the .177 rifle. That one gets into the 1,300 feet per second range with light pellets. Where I’m located, the speed of sound is about 1,130 feet per second, give or take depending on weather conditions.

The Gamo Swarm Maxxim features the CAT (Custom Action Trigger.) In plain English, that means you can adjust the travel length of the first and second stages of the trigger movement independently. Want a short first stage and long second? No problem. Similarly, you can adjust to any combination of first and second-stage travel to suit your preference. The manual safety is inside of the trigger guard, forward of the trigger itself. To put the rifle on safe, move the lever back toward you. To place the rifle into fire mode, flick the safety forward toward the target. It’s simple and easy to do without disturbing your sight picture.

I shot the heck out of a .22 Gamo Swarm Maxxim at the last Squirrel Master Classic. When there were no squirrels to be found, we spent lots of time and launched infinity-billion pellets into non-organic targets of opportunity. The quick word on the new “sorta-semi-automatic” system is this. After a handful of cycles, you’ll get it. As you’re advancing the magazine and loading with each cocking stroke, it’s important to do it properly. Short stroking won’t hurt anything, but you may end up with an empty chamber. No worries, it’s surprisingly reliable if you do your part.

What’s also surprising is how much more quickly you can shoot. On paper, you might assume that little time would be saved not having to feed a pellet. Not true. I found that the majority of time between shots is normally spent finding an individual pellet with my fat fingers, orienting it properly, and placing it in the insultingly small hole. Avoiding all that saves time. A lot of time. You can cock a break-barrel rifle pretty fast when you want to.

Given that this is an affordable field rifle, I bypassed the Olympic indoor range and did some quick and dirty velocity and accuracy testing. Using a Shooting Chrony Beta Master Chronograph about 12 feet away, I recorded velocity of Gamo’s .22 caliber Red Fire hunting pellets. These polymer tipped projectiles weighed 15.4 grains and averaged 691.6 feet per second. I also ran some H&N Sport Barracuda Match pellets through the chrony. These heavier 21.14-grain round-nose pellets averaged just about 545 feet per second under the same conditions. As for accuracy, using a sandbag rest at 15 yards, the Gamo Red Fire’s grouped into .75 inches while the Barracuda Match pellets made a center-to-center ragged hole of about 1/4 of an inch.

The bottom line? For the price, this rifle is a lot of fun. I’ll keep the .22 caliber version because everyone says bigger is better and also because… why not? Got squirrels, rodents, small game, or a dangerous overpopulation of tin cans? Here’s your huckleberry.