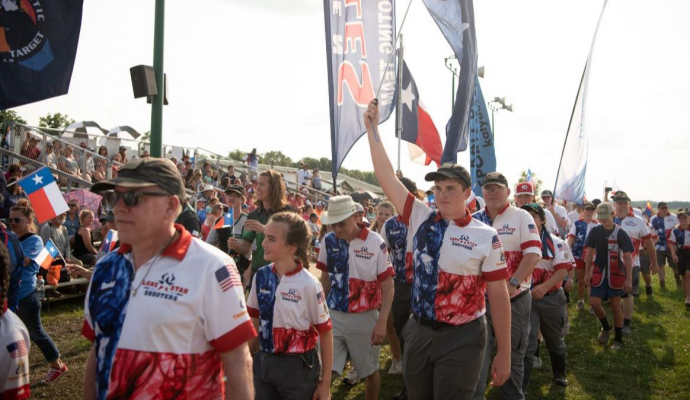 Each year in July, thousands of youth shooting sports athletes converge at the Cardinal Shooting Center for their National Championship. To support the monumental ten-day event, team coaches, adult volunteers, family members, sponsors, program staff, vendors, and others all do their part to ensure each youth shooting team’s Nationals experience is unforgettable. Affected by an abbreviated close to last year’s season, the Scholastic Clay Target Program (SCTP) and Scholastic Action Shooting Program (SASP) both saw the prestigious National Championships come roaring back, with teams from 33 different states setting all-time records for attendance. To help alleviate the new difficulty of finding ammunition, program sponsors like Winchester, Remington, Federal, and CCI went above and beyond in their support, providing product so SCTP and SASP teams could continue competing. A new bar has been set and the outlook for youth shooting sports is looking brighter than ever.

On the front end of Nationals were the international events of Bunker Trap, International Skeet, Air Pistol, Air Rifle, and Sport Pistol. As the Official Youth Feeder Programs for USA Shooting, the SCTP and SASP provide many opportunities for competition and development for athletes chasing their Olympic dreams. The American sports of Action Shooting, Skeet, Trap, and Sporting Clays followed with a 10-day event schedule.

On the pistol and rifle side, the SASP opened up with international events with the 2020-2021 season being the first to offer the international disciplines of 10 Meter Air Rifle, 10 Meter Air Pistol, and Sport Pistol. The expansion of shooting disciplines offered by the SASP realizes the SSSF’s mission to serve as a feeder/pipeline for organized, sanctioned shooting organizations and teams. 2021 saw SASP’s record for the largest action shooting event in the world definitively set for the third consecutive year. Over 650 participants competed in a staggering 2,000 entries where well over 200,000 rounds were sent downrange. To accommodate this spike in participation, the Cardinal Shooting Center expanded its action shooting facilities from eight to a total of twelve shooting bays in anticipation of another world record event taking place.

After the final shots were fired at the 2021 National Championships, it would not only set program records but it would also go down as the largest shoot in the history of the Cardinal Shooting Center. Youth shooting sports bounced back from 2020 and we look forward to the new season starting in August.

The Scholastic Shooting Sports Foundation (SSSF) is 501(c)(3) public charity responsible for all aspects of the Scholastic Clay Target Program (SCTP) and Scholastic Action Shooting Program (SASP) across the United States. The SCTP and SASP are youth development programs in which adult coaches and other volunteers use shooting sports to teach and to demonstrate sportsmanship, responsibility, honesty, ethics, integrity, teamwork, and other positive life skills.

The mission of the SSSF is to provide and enhance personal growth and development opportunities for student athlete members; become the premier authority in all things pertaining to firearm-related pursuits for youth; pass on to future generations the legacy of lifelong, safe, responsible enjoyment of the shooting sports. This includes serving as a feeder/pipeline for organized, sanctioned shooting organizations and teams.