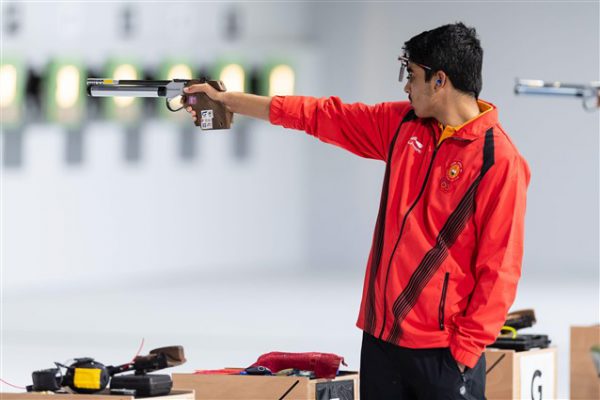 Earlier this year, indeed, the Indian youngster had already won gold at the Jakarta-Palembang 2018 Asian Games — where he prevailed over a group of multi-decorated and more experienced shooters — at the ISSF World Championship in Changwon (KOR) — where he competed among juniors — and at the Junior World Cup held in Suhl (GER), setting a new Junior World Record twice and proving to be the most talented junior Pistol shooter in the world.

In Buenos Aires, despite only hitting the 10th ring once in his first series, Saurabh stood atop the board since the very first shot and increased his advantage all along the match: eventually, the 16-year-old scored 10.0-or-more points with his last nine shots, finishing with 244.2 points and the gold medal around his neck.

The silver and bronze medal were awarded to Republic of Korea’s Sung Yunho (18) and Jason Solari (18) of Switzerland. The two shooters exchanged position multiple times along the final, and at the end Sung claimed the 2nd place with 236.7 points, while Solari concluded in 3rd with 215.6.

At the feet of the podium, Kazakhstan’s Eldar Imankulov (17) took 4th place, missing the medal positions by 0.3 points at the moment of the elimination. The Kazakh shooter scored 197.0 points and pulverized the 65th place he obtained among juniors in Changwon.

18-year-old Rihards Zorge of Latvia and 18-year-old Pavel Schejbal of the Czech Republic were the first shooter wliminated from the contest: Zorge signed off after shot number 12, taking 8th place with 110.2 points and obtaining the best results of his career so far, while Schejbal — who made his debut in the ISSF World Cup in Munich this year — followed him two shots later, taking 7th position with 134.4.

Shooting sport at the Buenos Aires 2018 Youth Olympic Games will award another title tomorrow, as the 10m Air Rifle International Mixed Team final is going to take place at 11:00 am (UTC-3:00).