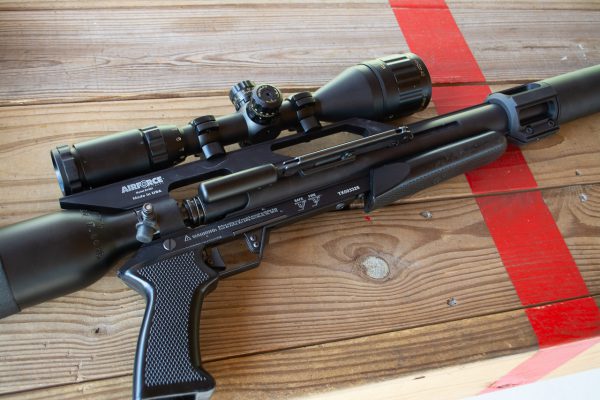 Sound suppressors are often referred to as “cans.” In the case of the AirForce Texan SS Airgun, that seems to be a literal engineering goal, but I mean that in a loving and complimentary way.

You see, the raison d’être of the Texan SS is big bore performance without the noise. The standard AirForce Texan features a 34-inch long barrel. That’s great for velocity and power as the .457 model flings a lead brick at up to 1,000 feet per second. That’s smokin’ and translates to 500 foot-pounds of energy. 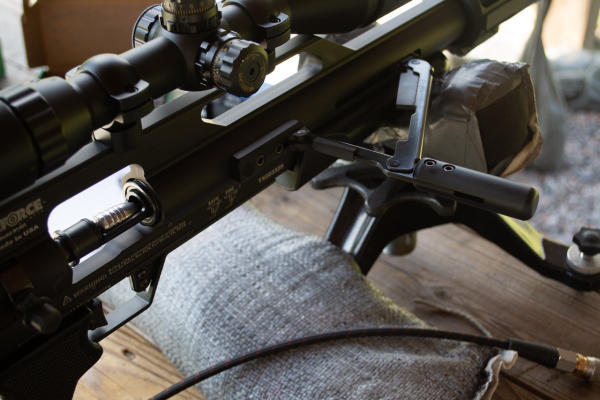 One feature I really like about the Texan SS is the long cocking lever. It’s effortless to operate and exceptionally smooth.

The Texan SS model uses the same interior barrel as the Texan Carbine, with a 24.75-inch length. However, it’s shrouded with a large can about the diameter of a Louisville Slugger. Being shorter, the overall compactness of the rifle is improved as well. So, the net-net of the Texan SS model is compact and quiet. 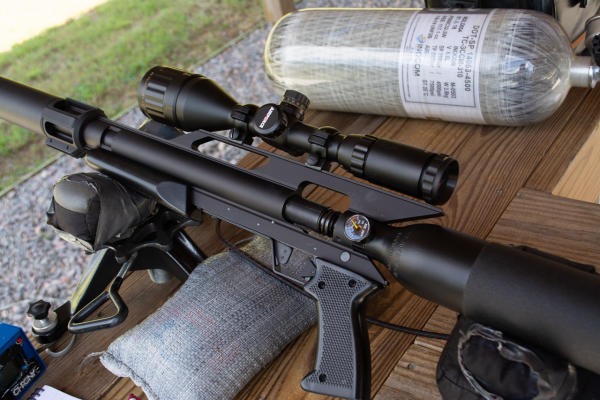 Like other AirForce rifles, this one uses an air reservoir that doubles as a buttstock. It’s easily removable using the ingenious Spin-Loc attachment so you can tote a spare pre-filled tank in your pack for a day in the field. It takes 3,000 psi of air, so for maximum range-outing joy, you’ll want a 3,300 psi SCUBA tank or preferably a 4,500 psi carbon fiber version. 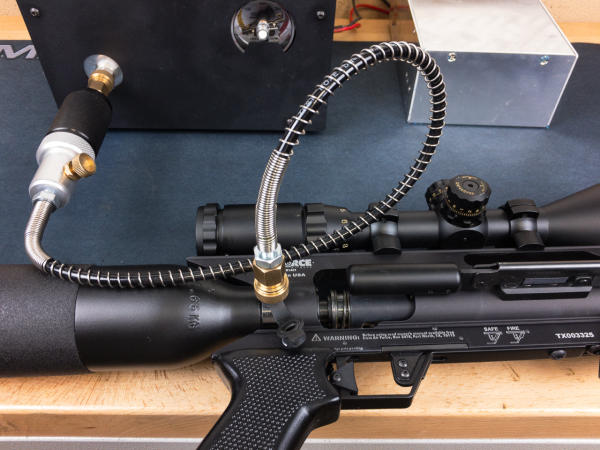 This was my first opportunity to test out the uber-portable Benjamin Traveler compressor. It did a great job filling the Texan and a few other rifles I’ve tried so far.

The Texan SS arrived with 1,600 pounds per square inch of air in its tank. Given the generous 490 cc cylinder size, that’s a lot of air required to bring it up to its full capacity. Rather than put a dent in the Omega Cylinders tank I’ve been testing before I even got to the range, I decided to try out the new Benjamin Traveler portable compressor that had conveniently arrived the night before. The Traveler runs off standard 110 or 220 AC power, or you can hook it up to a car, ATV, or even lawn tractor battery to run it in the field. Since I was at home watching some college football, I elected to do it the easy way and use South Carolina Gas & Electric for my power source. After connecting the Texan SS and Traveler, I set the max fill pressure on the compressor to 3,000 psi and let it run. Exactly seven minutes and 15 seconds later I had a full and ready to shoot Texan SS air rifle. Now I can take my still-topped-off cylinders to the range and use their precious air there. We’ll be doing a lot more with the Benjamin Traveler in the coming weeks and cover its capabilities in a future column, so stay tuned. 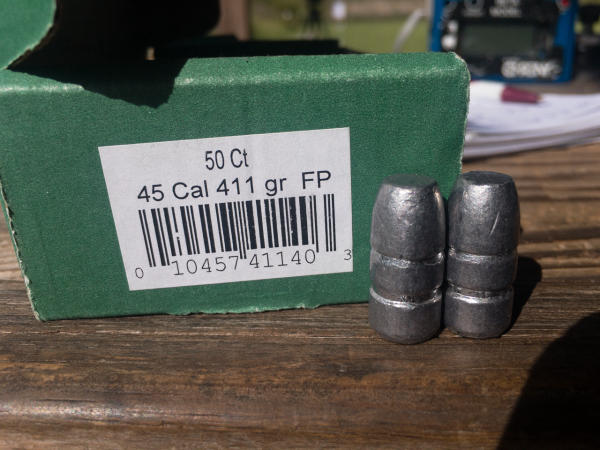 These 411-grain, umm pellets, from Hunters Supply shot very well and made an entertaining “thud” sound in the dirt backstop.

I took the Texan SS to the range with about 38 pounds of lead pellets of varying weights from Hunters Supply. The Texan SS sports a .457 caliber Lothar Walther barrel, so I brought along some of the 350-grain Hunter Supply .457 slugs and a variety of .457 pellets, round balls, and slugs of other weights and shapes. I also toted an Omega Air Cylinders 75 cubic-foot, 4,500 psi air cylinder. That turned out to be a good idea as I spit out more compressed air than the Senate Judiciary Committee. 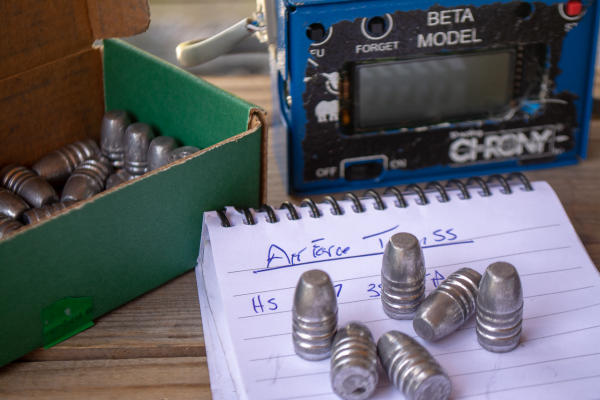 These 350-grain pellets offered a great compromise between weight and velocity.

Being a windy day, I elected to shoot everything at 50 yards. I also set up a chronograph about 15 feet in front of the muzzle so I could get some quick velocity readings on a variety of .457 pellet types and weights.

I noticed that I had the best overall results when I seated the pellets as far into the chamber as they would go using finger pressure. For almost all of them, it was a very tight fit, as it should be. I think only the Hunters Supply 250 PHP pellets would go all the way into the chamber with hand pressure alone. 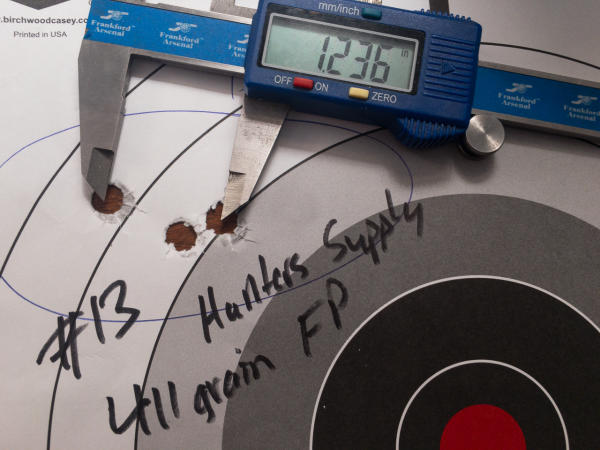 I observed solid accuracy from a variety of the projectiles across the .45 caliber weight spectrum.

One thing I’ve learned is that the Texan family makes a great platform for custom work. If you want to accurize your Texan to produce five-shot, 50-yard groups in the fraction of an inch range, give the folks at Hunters Supply a call. For $275.00 they’ll perform their Alpha Tuning service and check the chamber for correct pellet seating, fire lap the barrel for smoothness, and crown the barrel for a more uniform pellet exit.

I didn’t do a full shot count and velocity analysis to find the absolute shot count limit for different pellets. We’ll be getting down into the nitty-gritty of big bore ballistics in a couple of weeks using this rifle and a wide variety of pellet types. Based on subjective observations, you’ll get at least five “pretty much full power” shots per tank top-off. For hunting outings, the Texan SS is ready to go, and if you’re unsure, just throw a spare pre-filled reservoir in your pack. For range trips, bring a cylinder. This rifle is crazy fun to shoot and the lack of sound makes the “thud” in the target berm all the more satisfying, so you’ll most certainly burn through some lead. 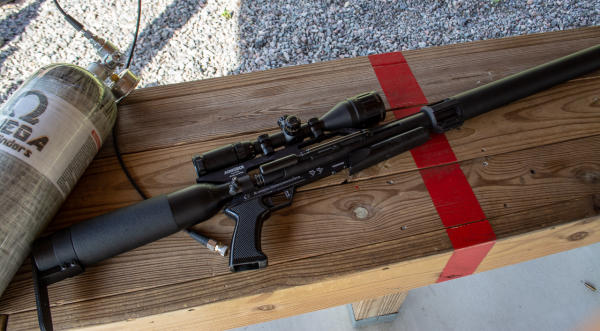