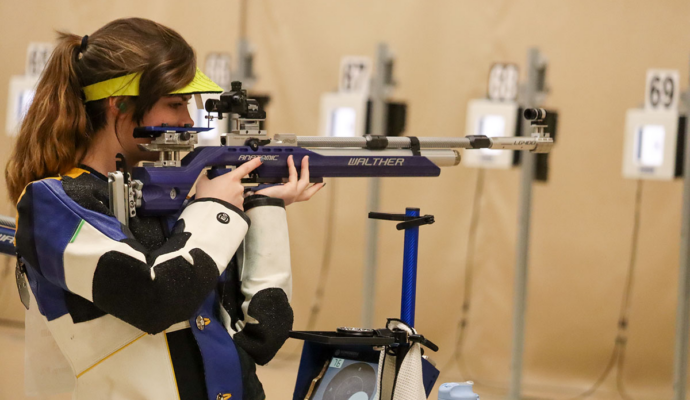 A group of 143 juniors and adults fired in the two-day air gun event, which was held Nov. 5-6, at the Judith Legerski CMP Competition Center in Anniston, Ala. Competitors in the annual event hailed from various areas of the country and even outside of it, with Canadian athletes making the trek southward to compete.

Each year, the Dixie Double attracts a wide array of experience levels, including individuals just beginning in the sport, military members, Olympians and everything in between. The match schedule features two days of 60 Shot international air rifle and air pistol matches for Open and Junior categories, with qualification scores and finals fired each day. Overall competitors are awarded at the conclusion of Day 1 and Day 2 as well as from the two-day aggregate scores.

Returning to the Dixie Double in 2022 after a brief hiatus was the Target Sprint, which welcomes individuals ages 10 and up. During the event, participants run along a marked path, occasionally stopping to fire air rifles at five 10-meter falling targets. All targets must be knocked over before participants continue on and repeat the route. The first to cross the finish line is declared the winner.

“The Target Sprint was a huge hit,” said Renay Woodruff, supervisor of the Competition Center. “We had to have at least five relays during the competition just to fit in everyone who wanted to compete.”

Back in the air gun range, SPC Jason Gregoire, 34, of Midland, Ga., fired a score of 1137-27X to overtake the two-day Open pistol aggregate by a 20-point margin. Maintaining a lead throughout the weekend, Gregoire led both the Day 1 and Day 2 Final.

Other juniors earning notable scores in rifle were Charlotte Mick, 18, Nunn, Colo., with 1244.7, and Bremen Butler, 18, of Fort Wayne, Ind., with 1241.5. Mick earned fifth in the overall Open match, while Butler earned eighth.

Coinciding with the Open and Junior competitions is the two-person team match that combines the scores of an adult and youth athlete in both air rifle and air pistol. Leading in rifle was Tim and Cam (Tim Sherry and Camryn Camp) with a score of 2489.4. In pistol, Red and Black (David Aglietti and Heija Wang) reached an aggregate score of 2188-31X to claim the top spot.

A complete list of results for the 2022 Dixie Double air gun match can be found on the CMP’s Competition Tracker page at https://ct.thecmp.org/2022DDResults. Find free downloadable photos of the event at https://cmp1.zenfolio.com/f980746400.