You are here: Home / Features / Air Happenings at the 2019 NRA Annual Meeting 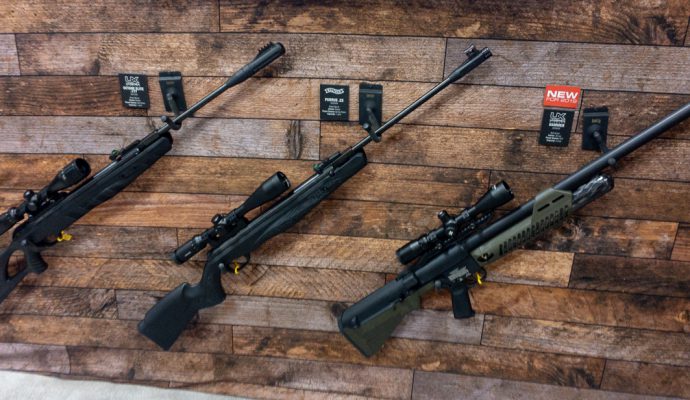 One of the most interesting things about the NRA Annual Meeting is the crowd. While 75,000 or so visitors makes things a hair congested, and often frustratingly so, you simply won’t find a group of kinder and more respectful folks anywhere. Politeness abounds. Every year I make it a point to talk to a couple of the local law enforcement officers working the event. Without fail, the reports are always the same. “This has been a great crowd; we’ve had no issues of any kind.”

On closing day this year, I was in a busy food court just before the doors opened. With no announcement, the national anthem started to play over the convention center sound system. Obviously, there was a young woman somewhere in the acres and acres of halls singling live, but she wasn’t anywhere to be seen from where we stood. All activity, including cooking at the food vendor stalls halted. Completely. You could hear a pin drop minus the singing. I looked around to see hundreds of people standing rock-solid still, hats off and hands on hearts. There wasn’t a flag nearby, but that didn’t matter. As soon as the lady finished, spontaneous applause broke out. That’s a taste of what the NRA Annual Meeting is all about.

Of course, the end of the anthem meant that the day’s expo activities were ready to begin. Here’s a look at some of what we found for you airgunning enthusiasts.

A (relatively) new AirForce Airguns model caught my eye this year. I’d heard about it, but the Escape is one of those things you have to see and handle to appreciate.

Intended to be a survival rifle, this .25 caliber is designed from the ground up to be insanely portable and filled from a hand pump. If you’re stuck in the boonies, you’re not likely to have an electric compressor (or power for that matter), right?

Outside of the compact size (think Ruger 10/22, Cricket or Daisy Red Ryder proportions) the Escape maintains the signature AirForce design and profile, just smaller all around. The tank has been engineered to provide 20 shots of power while using about 1,000 psi off the top of the 3,000 psi tank. That means you can top off, from 2,000 to 3,000 psi with just about 20 strokes from a hand pump. That’s a pretty good tradeoff in my book.

The miniaturization of equipment and price tage continues in the portable air compressor market. The new TactAir Spark from Hatsan is smaller than a shoebox but will fill your PCP up to 4,500 pounds per square inch. It’s a 12-volt system but you can order a separate AC inverter to run it in the house or garage. It’s appropriate for direct filling of airguns and cylinders up to 1 liter in volume.

With a retail price of just $419.99 this is a hot seller. The company has brought in three containers recently, all of which sold out in less than a week.

Nah, we’re not talking about the “six-degrees from” Hollywood Actor Kevin Bacon, we’re talking about something much more useful. While not edible, at least directly, it’ll still help you to learn the skills to put bacon on the table.

While talking to the Umarex folks about the forthcoming Hammer .50 caliber, I saw a porked-up blur race across the booth floor. On closer examination, I found it was a remote-controlled vehicle with a pig target mounted on top. This technology wonder appeared to be up-armored around the chassis, at least enough to handle airgun calibers. I should have known it was a creation of the folks at GnatWarfare.com. A couple of years ago, I encountered some of their flying drone shotgun targets. An RC “driver” races these things across a trap or skeet field and you literally try to blow them out of the air. They’re designed to be shot down but easily reassembled. Looks like Kevin Bacon (their pet name for the remote-controlled pig project) will offer many of the same active target attributes for airgunners. Stay tuned, they’re trying to get this to market soon.

Speaking of Umarex, the Hammer .50 caliber is finally about ready to ship. Word on the street is that we’ll see it in June.

Sig has a plethora of new pellet, BB, and Airsoft guns on display in their growing air products kiosk in the main booth. The new Sig Air MCX Virtus was on display. This is Sig’s first PCP rifle and it looks fantastic. It uses a Foster fill port (thank you!) with a manometer on the opposite side. The air reservoir double as a stock so there’s no excess bulk up front to take away from the classic Sig MCX appearance. It’s a .22-caliber rifle with 3,000 PSI tank pressure. It’s regulated to 1,100 psi for shot to shot consistency and the company expects you can get 150 shots per fill from multiple loadings of its 30-round internal belt magazine.

Also on display was the new P365 BB pistol. This CO2-powered pistol is just like the real thing with the exception that it fires (12) 4.5mm BBs instead of fiery ammo. You can expect velocity in the 295 fps range and it’ll retail for $99.95.

The company also has a slew of Airsoft pistols and carbines close to shipping. On display I saw a P226, P229, M17, and ProForce MCX Virtus. Stay tuned.