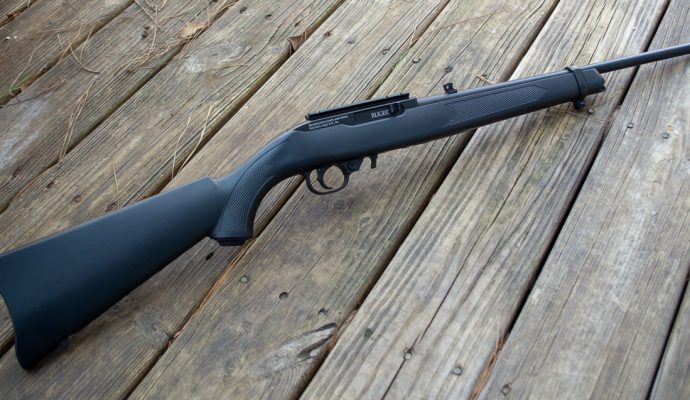 Campaign season is upon us – again. You can always tell by the number of politicians who say they’re not running for president while secretly crossing their fingers. Getting into the spirit myself, I’m thinking of taking a shot at claiming that leather chair in the Oval Office. In fact, I’m feeling squared away on the status of my job requirements checklist.

I know, you’re gushing with praise for the sheer brilliance of that marketing angle but there is one little gotcha. Not everyone’s home is rimfire friendly because most neighbors aren’t all that keen on .22 LR bullets coming through their walls. No worries, this is where the brand-new Ruger® 10/22® Air Rifle by Umarex shines.

Scheduled for retail availability in the May time-frame, this handy little air carbine is powered by CO2 squared. Not those expensive 90-gram cylinders but the standard 12-gram ones available at most any big box or sporting goods store. A clever design feature allows insertion of two CO2 cylinders without need to change the exterior dimensions or appearance. A push and twist of a recessed button on the butt pad allows you to remove it. This exposes the CO2 well where two cartridges insert base to base, so cylinder air valves are at both ends of the stock to draw from each. The butt pad features a built-in wrench for opening and closing the gas system and piercing the cartridges.

The Ruger 10/22 Air Rifle is a dead ringer for the rimfire version. It looks the same and feels the same. It’s just fires a .177 caliber pellet. The rotary magazine drops like the rimfire version using a lever just forward of the trigger guard. On closer inspection, you’ll see a circular sub-magazine that holds ten pellets. This sub-magazine is removable for easier loading.

The sighting system consists of a front blade with a brass bead insert for extra visibility and a flip-up rear leaf mounted on the barrel just forward of the receiver. The rifle won’t ship with a rail – the one shown here is an add-on and you can pick one up at ShopRuger.com if you like. That will allow you to mount a scope or red dot optic.

The rifle shoots in semi-automatic mode – if you like. If you retract the bolt with each shot, the magazine will advance, and you’ll get a lighter three-pound trigger press. If you press the trigger without operating the bolt, you’ll advance the magazine and fire another shot, just with ten pounds of trigger pressure.

I didn’t do any. Seriously, who cares for a rifle like this? It’s a FUN plinker that’s accurate enough for any reasonable use considering its CO2 power packs. Whether it shoots at 500, 600, or 700 feet per second doesn’t make a hoot of difference to me. Maybe when my new Labradar unit comes in, I’ll velocity test it on a rainy day, but again, it just doesn’t matter. Not being a complete slacker, I did the time-honored soda can test. The Ruger 10/22 perforates those just fine.

I did do accuracy shooting with five types of pellets to spread the love. Since it was cold outside, which isn’t conducive to good performance from CO2 guns, I used my indoor range. From a prone position in my sitting room, through the master bedroom, and into a target trap in the master bath I had a serviceable 10-yard range. Just don’t tell my wife.

While I didn’t shoot enough groups to publish definitive ammo preferences, this handy little carbine seemed to like the RWS Superdome and Daisy Precision Max pellets.

This little rifle is going to be a winner. Even using a pre-production version, I experienced reliable operation and magazine feeding performance. It’s hard to beat a .22 rimfire Ruger 10/22 for pure plinking fun, but this just might do it. You get the same shooting joy but can experience that in your garage, basement, or backyard.