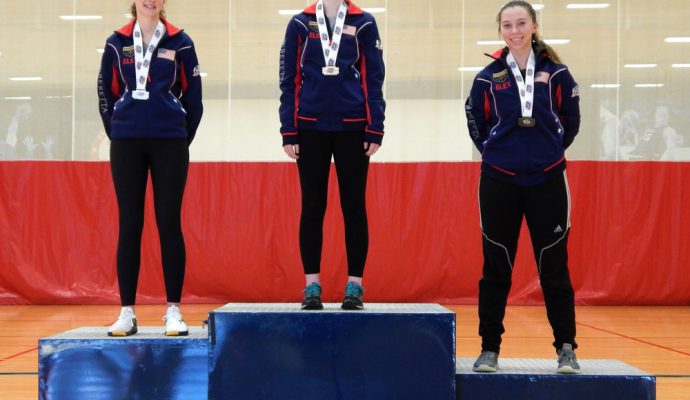 Katie Zaun (Buffalo, North Dakota) had the gold medal all but locked up before she even entered the Final today. As this was a selection match for the International Shooting Sport Federation (ISSF) Junior World Cup in Germany this summer, all athletes shot two Qualification matches and were selected for the Final based on cumulative points. Additional points – eight for first, seven for second, six for third and so on –  were awarded based on finish in the Final. Medals, National Junior Team appointments and slots on the team going to Germany were awarded on the total points from Qualification and Finals finish.

Over the two days of Qualification, the 15-year-old had amassed 2329 points – six points more than eventual silver medalist Sarah Osborn (Hampton, Virginia). “I worked very hard and every single 10 just worked out and it paid off,” said Zaun, who admitted she knew she had such a lead on the field but tried not to let it affect her performance in the Final.

Though Zaun finished the Final in fourth place, at the end, she still had three points on Osborn to hold on to the gold. Local athlete Morgan Kreb (Colorado Springs, Colorado) won the bronze medal.

“I was very consistent and just tried to do what I know how to do, and it worked out, so I’m pretty happy,” said Zaun. At the end of February, Zaun competed in the ISSF World Cup in New Delhi, India and credited shooting a major competition like that with helping her learn how to deal with nerves. Zaun also won bronze in Women’s Air Rifle earlier in the week in a shootoff.

Results from this match: https://bit.ly/2GuSv0z.

The Pistol and Paralympic competition at NJOSC starts Saturday. Watch for the preview of the event to be released tomorrow.

The 75 athletes competing in Women’s Air Rifle won their chance to compete at NJOSC because of their finishes at the state-level Junior Olympic matches. Overall, 607 athletes from 48 states will compete in Rifle, Pistol and Paralympic events throughout the three-week NJOSC. The NJOSC features the top 34 percent of all competitors in 2019 and will feature invitees that either won their state championship or were selected based on a score they attained.  The competitors range in age from nine to 20 years old.

View and download images from the Women’s Air Rifle competition at NJOSC: https://flic.kr/s/aHsmxt8zob.