You are here: Home / Competition / With the Help of CMP, USA Shooting Wraps Up 2021 Winter Airgun Championships 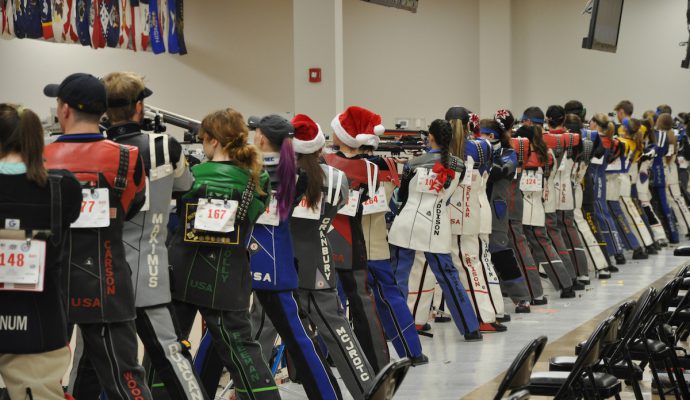 Colorado Springs, Colorado– Super-finals, team events, competitive fun, and cash prizes are all part of the Winter Airgun Championships (WAG) hype. With the generous support from the Civilian Marksmanship Program (CMP), USA Shooting hosted the end-of-year airgun event for the second consecutive year at both CMP locations in Alabama and Ohio from December 5-12, 2021.

Breanne Orey, Director of Competitions at USA Shooting, describes this year’s WAG as the culmination of competitions in 2021.

“WAG has always traditionally been a year-end championship event, but with the help of CMP, we’ve been able to add in some friendly competition with super finals and more comradery through team events, said Orey. It’s really become the culmination of USA Shooting airgun events and the spirit and emotions that we want all competitors and the organization to carry on well into the next year.”

Pistol sent the first shots downrange in Anniston, Alabama where a mix of Olympians, collegiate athletes, and juniors alike dominated the individual and team events. Two-time Olympian, Nick Mowrer finished with the men’s overall high score of 581 and Laura Acosta from Puerto Rico finished with the women’s overall high score of 571. Mowrer would go on to win the Men’s Individual final with Jason Gregoire taking the silver and Anthony Lutz taking the bronze. Acosta won the high-international award, but it was Katherine Ahn, Jenny Noh, and Tokyo Olympian Alexis Lagan who won gold, silver and bronze respectively in the women’s finals individual event. Noh proved that age is just a number when it comes to competitive shooting as the only U15 athlete in the open finals who ended up taking home the silver.

“It’s so exciting to see (for the second year in a row) how welcoming CMP has been to USA Shooting and their athletes. The team events worked extremely well. Nick Mowrer and I train together and have a great dynamic, so it was fun to share that camaraderie with Lisa for our three-person team. The team matches also open the opportunity for experienced athletes to team up with junior shooters and create mentorship opportunities,” said Alexis Lagan, Tokyo 2020 Olympian.

Lagan and Mowrer competed together in the mixed team pistol event in Tokyo.

The junior individual finals also saw their fair share of recognizable athletes, including many members of the El Salvador Team who competed earlier this year, as well as the Junior World Championship team who competed last month. On the junior men’s side, Nathan Bae, Remington Smith, and Jonathan Dorsten went one, two and three, while Suman Sanghera, Ada Korkhin, and Katelyn Abeln went one, two and three for the junior women.

The three-person team of James Hall, Nathalia Tobar, and Gregoire squeezed out a victory over Mowrer, Lagan, and Lisa Emmert. Emmert would get redemption with teammate and Tokyo Paralympian, YanXiao Gong where they won gold over the mixed team of Gregoire and Sandra Uptagrafft. Gong took home the gold in the men’s para category ahead of teammate Marco De La Rosa and Josue Lopez who medaled silver and bronze respectively.

While there’s no overall WAG winner, it’s safe to say that Gregoire is one of the few who completely dominated and departed Anniston a triple-medalist, including two silvers and a gold.

“It was super exciting to have everyone present for WAG. I saw a lot of our juniors throughout the fall but getting them back together and mixing with our National Team and open competitors is always a great time for them and for the level of competition. There was a ton of positive talk about the team events, and I know a lot of the pistol athletes are already figuring out their teams for the three-person WAG event next year,” said Jason Turner, USA Shooting National Pistol Coach.

Immediately following pistol, it was rifle’s turn to take their shot at the three-day competition format, taking place simultaneously in both Anniston, Alabama and Camp Perry, Ohio.

USA Shooting Para Athletes also gathered in Anniston to compete in R2, R3, R4, and R5 events. Leonard Esparza, Kevin Nguyen, and Robert Beach went one, two, and three in the R3 event, juniors Madison Champion and Benjamin Hays took gold and bronze respectively in the R3 event with Jazmin Almlie-Ryan earning silver, and it was Almlie-Ryan and Champion again with the silver and bronze win in the R5 event where Paralympian and Paralympic Finalist, Stetson Bardfield won gold. In the same R5 event, Hays won gold, Trent Clayton silver, and Haricharan Tadpatri won bronze in the junior category.

National Para Coach, Don Stith, had this to say about WAG:

“Well first, Breanne and CMP did an outstanding job. We had three times the number of para-athletes at the event this year compared to last year. We were also able to have those athletes see a classifier to understand where they would classify in their sport, which is extremely beneficial in the long run for the para movement. We had some athletes shoot their personal best every day of WAG, and there was a lot of camaraderie since it’s one of the only times they’re all here at the same time.”

Up in Ohio, it was the same competition with a different story, where many USAS standouts took home the medals and proved their depth in the finals.

University of Alaska standout, Rylan Kissell totaled the highest aggregate score on the men’s side, but it was Kellen McAferty, Matt Sanchez, and Brandon Evans who won gold, silver, and bronze in the men’s final. Kissell barely missed out on a medal with his fourth-place finish.

“It’s always great to see all the competitors who show up to WAG and what was even more wonderful was the turnout this year. I saw a lot of fantastic performances throughout all categories, and it was fun to see team matches back again. This year’s WAG was a great close to the 2021 season, and a great sign for another successful 2022 season coming up,” said National Rifle Coach, Dan Durben.

After individual finals, it was time to form three-person teams and compete for additional WAG Championship titles

“We couldn’t be more thankful to CMP for co-hosting this event at their amazing facilities. They’ve been such an integral part of our 2021 season including helping host our largest Rifle Junior Olympics on record at Hillsdale College this past spring,” added Orey.

USA Shooting is proud to have offered the second consecutive Winter Airgun Championship competition at both CMP locations accommodating over 400 USAS competitors.

A full list of results of all competitors from both rifle and pistol Winter Airgun Championships can be found on the USA Shooting website at: https://www.usashooting.org/7-events/nationalresults

As well as on the CMP website at cmp.org:

And photos from the entire weekend taken by CMP can be found here: https://cmp1.zenfolio.com/f810287427