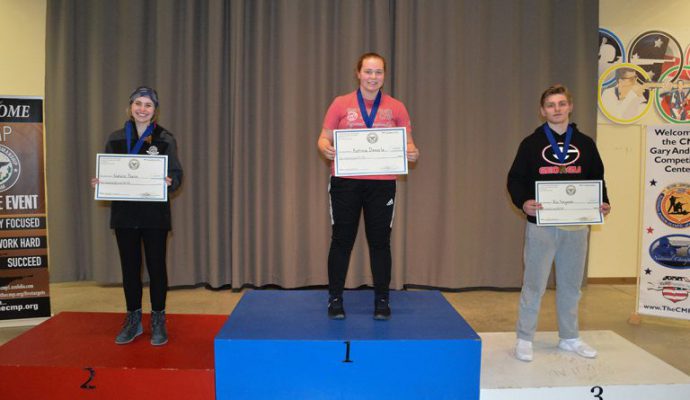 CAMP PERRY, Ohio – A series of snow emergencies forced parts of the Civilian Marksmanship Program’s (CMP) 2019 Camp Perry Open to be cancelled during the weekend of Jan. 18-20. The annual event is designed to include 3×20 junior air rifle, 60 Shot air rifle and 60 Shot air pistol competitions over a span of three days, but was cut to just two by the unforgiving weather.

During last year’s competition, Northwest Ohio was hit by a similar winter storm that brought ice, snow and wind gusts up near 30 mph and pushed ice shelves from nearby Lake Erie over the shoreline outside of the facility. Despite the weather, the 2018 event was still held in its entirety.

But, this year’s event wasn’t as lucky.

Friday’s junior 3×20 match went off without interruption, as 155 athletes fired 20 shots from three different positions: prone, standing and kneeling. The mix of sporter and precision class competitors accumulated qualification scores during the day, with the Top 8 over each classification competing in a Finals competition to determine the day’s winners.

In sporter, Cailin Garrett, 18, of Greenbrier East High School in West Virginia, fired an aggregate score of 778.9 to claim the overall win. Garrett earned her title by 30 points over second place finisher Rachael Paddock, 14, of Wyoming County 4-H Shooting Sports in New York, who earned a total score of 748.7. Abigail McCutcheon, 18, also of Greenbrier East High School, landed in third with a score of 729.6.

Katrina Demerle, 14, of Fairfield Sportsman’s Association in Ohio, topped the precision class with a three-point leading score of 834.5. Natalie Perrin, 16, of Demmer Center Jr. Shooters in Michigan, followed in second with a score of 831.5, as Rio Ferguson, 15, of Mass Rifle Rebels in Massachusetts, took third with 811.2.

The threat of an upcoming winter storm on Saturday kept the CMP staff members vigilant of local radars as the air rifle and air pistol 60 Shot qualifying matches fired simultaneously. Both juniors and adult competitors competed shoulder-to-shoulder during the matches.

Due to the piling snow, the decision was made to move the event’s famous Super Final (typically fired on Saturday), to Sunday in order to allow guests and competitors more time to make it back to their housing, safely. Participants fired only qualifiying scores for the day.

The mounting snow and ice outside caused the area around Camp Perry to be moved to a Level 3 Snow Emergency Saturday night, which meant only emergency vehicles were allowed on the roads. The Level 3 carried on through the night and into Sunday, leaving the CMP staff no choice but to cancel the remaining Camp Perry Open activities.

Overall winners for the 60 Shot events were comprised of the top scorers of Saturday’s qualifying match.

Junior leaders were Claire O’Neel, 18, of Frederick, MD, with a score of 619.0. O’Neel also finished fourth in the overall Open Match. Brandon Mach, 19, of Riley Township, MI, and Sarah Lough, 15, of Morgantown, WV, finished fifth and sixth in the Open event and second and third in the Junior competition with scores of 615.2 (Mach) and 614.2 (Lough).

Adaptive competitors, including the 2018 Shooting Paralympic Athlete of the Year, Taylor Farmer, also competed during the Camp Perry Open.

For a complete list of results, visit the CMP Competition Tracker page at https://ct.thecmp.org/app/v1/index.php?do=match&task=edit&tab=results&match=17354.

Photos of the event can be found and downloaded for free on the CMP Zenfolio page at https://cmp1.zenfolio.com/f515242946.