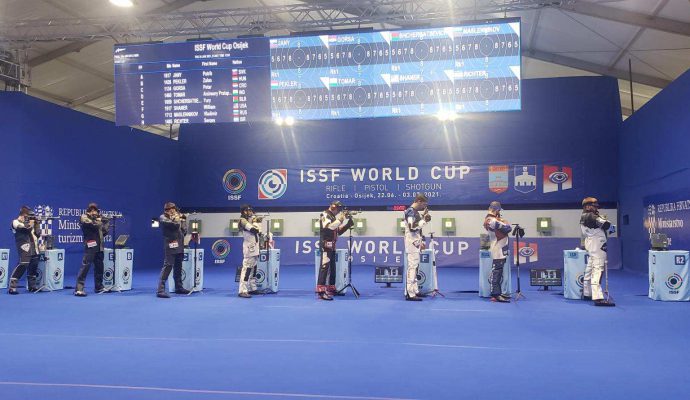 The youngest participant in the finals, Shaner won by taking the lead early and continuing his hold throughout all 24 shots. Shaner outscored Vladimir Maslennikov of Russia and Petar Gorsa of Croatia who took second and third respectively.

“Winning the World Cup is a huge confidence booster,” said Shaner. “I’ve always managed to get close to making finals but always came up short. So, to finally win helped prove that I am capable of competing in these higher intensity matches, and now I can go to Tokyo with a World Cup medal and proof I can win against the best in the world.” Since May, Shaner started training at the United States Olympic and Paralympic Training Center (OPTC) in his hometown of Colorado Springs, Colorado alongside Lucas Kozeniesky, two-time men’s air rifle Olympian.

“Training with Lucas at the OPTC beforehand gave me a lot of confidence going in. The entire time I tried to stick to what I know and not overcomplicate things. I managed to stay calm and focused and just kept doing my job to the best of my abilities until I was up on the podium. It doesn’t always end up that nice, but on this trip I was fortunate enough for everything to work together and give some insight in my preparedness for Tokyo,” added Shaner.

Shaner is one of two University of Kentucky Rifle athletes who will be competing in the Tokyo Olympics. As one of the nation’s top prospects coming into college, he was named NCAA Rookie of the Year his freshman year and was an All-American First Team member in air rifle and smallbore. William finished second in the NCAA air rifle individual championship in addition to winning the team gold with UK his sophomore year. He repeated this exact feat with again with UK his junior year. According to known USA Shooting records, Shaner is the youngest U.S. Men’s Olympic Rifle Qualifier.

When asked how he plans to prepare for Tokyo in the upcoming weeks, Shaner answered, “I’ll build off the confidence of this win and try to keep that momentum going into the Olympics. Training with Lucas at the OPTC and doing virtual training with Ali Weisz is going to be my main focus to keep the intensity of training high. I’m just very fortunate to be part of an Olympic team that supports each other.”

USA Shooting, a 501c3 non-profit corporation, was chartered by the United States Olympic and Paralympic Committee as the National Governing Body for the sport of shooting in April 1995. The organization implements and manages development programs and sanctions events at the local, state, regional, and national levels.

Headquartered in Colorado Springs, Colorado, at the U.S. Olympic & Paralympic Training Center, USA Shooting has a full-time staff dedicated to furthering the sport and supporting athletes and members of the organization. The organization has a USA Shooting News magazine publication, as well as public and member specific web sites.