You are here: Home / Features / What’s a Foot-Pound? 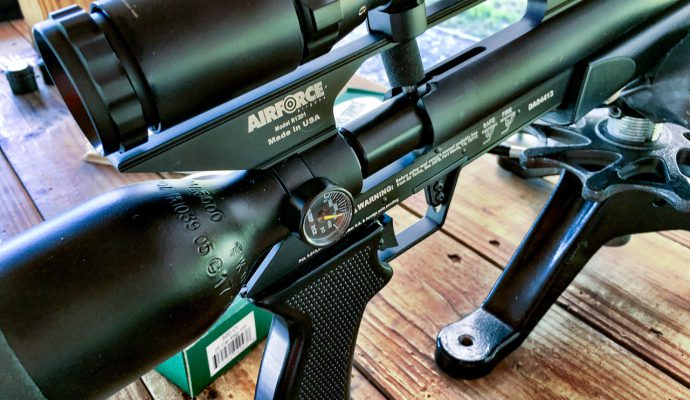 We all talk about this airgun or that producing “x” number of foot-pounds, but what does that really mean?

Since kinetic energy (foot-pounds in this example) reflect the amount of energy that the object (pellet) carries, you can also define it as the amount of work that’s required to get that object (pellet) moving to its measured velocity. It’s the same concept, just in reverse, so to speak, of stating the “carried” energy.

The thing about foot-pounds is that they’re velocity centric because of the underlying math. To calculate the foot-pounds of a pellet (or any other object in motion), you use the following formula:

Let’s do an example. When I tested an AirForce Airguns Condor SS using JSB Exact 25.39-grain pellets, I measured an actual velocity of 1,059 feet per second. If I do the math on that combination, I calculate a kinetic energy level of 63.2 foot-pounds. Simple, right?

So, if I increase the pellet weight by 10 percent and velocity remains the same, the kinetic energy goes up to 69.5 foot-pounds. That’s an increase of 10 percent.

However, if I increase the velocity 10 percent but keep the pellet mass the same, the kinetic energy increases to 76.5 foot-pounds. That’s an increase of 21 percent. It makes sense when you think about it because the velocity measurement is squared in the formula so it has far more impact on the result.

While we use foot-pounds as the de facto measurement of an airgun and its pellet’s power factor, it doesn’t paint a complete picture. To really understand how much “force” we’re talking about, you might want to consider momentum as well. You might think of momentum as the ability for one object to move another. Yes, I’m butchering Newtonian physics, but we’re making simple illustrations here.

If you made a really fast and loose analogy, you might think of kinetic energy (foot-pounds) as the destructive power like that of a power drill. It’ll bore holes through things like crazy but won’t knock them into the next county. This is why a centerfire firearm with, say 500 foot-pounds of kinetic energy won’t be able to knock over a 100-pound object, or even a 50-pound one. Try shooting some heavy inanimate object sometime and see what I mean. Even a 25-pound bag of sand wearing a bullet-proof vest (to prevent the projectile from simply passing through) won’t tip over when shot. And yes, I’ve tried it.

Momentum, on the other hand, measures an objects ability to move other objects or knock them down. Think of a bowling ball racing down the lane towards a set of pins. Even moving relatively slowly, that 16-pound ball is going to knock stuff over.

Using the same test scenario with the AirForce Condor SS and JSB Exact pellet, we can calculate momentum using the following formula:

To get a more complete view of the “power level” of any given airgun and pellet combination, I find it helpful to evaluate both kinetic energy and momentum. Kinetic energy tends to emphasize velocity, so if you’re making predictive comparisons for hunting or knocking down steel silhouette targets, be sure to consider the momentum figures too.