You are here: Home / Airguns / What Can 16 Million Crosman 760 Pumpmasters Do? 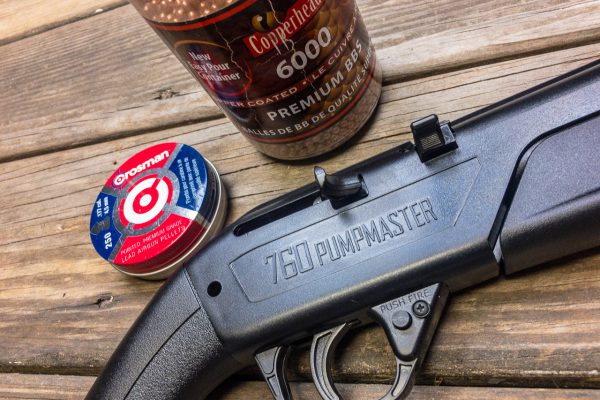 Anyone know a reputable personal shopping concierge? I’m stumped for an appropriate gift idea for a 50th-anniversary celebration. I think that’s the one where you’re supposed to give gold, but as much as I like the folks at Crosman, I don’t foresee Fed-Ex-ing ingots anytime soon.

What’s the occasion, you ask? Well, the air rifle that many of us grew up with is now over 50 years old. Originally introduced around 1966 (OK, so we’re rounding a bit on its exact age) Crosman has produced and sold over 16 million 760 Pumpmaster models of varying types since Adam West first appeared as Batman on television. Just so you Trekkies know that I care, that was also the year the original Star Trek series debuted.

So, 16 million 760 Pumpmaster rifles are floating around in the airgun world. That got me thinking. If all of us Pumpmaster owners got together to fire a coordinated shot at the same target… It’s a youth-size rifle which means I’ll just call it a compact carbine when I shoot it.

Yes, I did the math because I thrive on bunny trails. The new and improved Pumpmaster, with ten full pumps of pellet-driving power, will launch an alloy pellet at 700 feet per second. Let’s say an average non-lead .177 pellet weighs 5.25 grains. If you do the calculus, that works out to 5.7 foot-pounds of energy. That’s for one Pumpmaster firing one pellet.

Now suppose that all 16 million of us stand really, really close together and fire at the same time to create the world’s largest alloy pellet mass zooming towards a supremely unfortunate target. If you do the math, and I did, that works out to 91,409,383.5 foot-pounds of energy. That’s about the same as an F-16 fighter jet flying at 372 miles per hour. Nothing to sneeze at, right? Granted, getting all those Pumpmaster owners to get the same day off work and stand in the same spot may not be entirely practical… Anyway, 1966 was a big year for technological advances across the board. The Soviet Union launched the Luna 10 spacecraft around the moon, and the United States followed a few months later with the Lunar Orbiter 1. Neither mission was manned, but then again, they did that while others designed the Crosman 760 Pumpmaster – all with slide rules and graph paper. If you don’t know what a slide rule is, then plan a trip to the Smithsonian Museum of Science and Technology. Soon.

Known as the “rifle of choice for beginning shooters” the PumpMaster has undoubtedly helped millions learn how to shoot. As an introductory rifle, it’s youth size, but for a larger fella like me, I simply consider it a handy carbine. Given its small and light proportions, I’ve elected not to mount a scope. It’ll be an iron sighted, “I need a quick break from work,” and unexpected rodent disposal tool. Keeping things simple somehow seems appropriate. Between the 200-shot BB reservoir and the chamber is an 18-shot BB magazine for loading. The magnetic bolt picks them up from here.

Anyway, the 760 Pumpmaster, like all other classic guns still on the market, has evolved with the times. The newest models, available in black, wood-tone plastic stocks, and even pink, are available with traditional iron sights like the one shown here or ready to go with scopes. Two of the bigger design changes are improved velocity – 700 feet per second for alloy pellets and 625 feet per second for steel BBs, and a longer pump handle which makes prepping the Pumpmaster for each shot about 30% easier.

Lots of guns go both ways, but the Pumpmaster is interesting in that there are magazines for both pellets and BBs. Just above the grip and aft of the receiver is a well that holds 200 BBs. If you want to go the pellet route, you can fire them by loading the five-shot sliding magazine. The newer pump is longer than the original and about 30% easier to operate.

To make the BBs work, you first load the large BB reservoir. That’s a “tank” that holds 200 BBs give or take. By sliding the BB retainer button and loading reservoir cover to the unlocked position, you can dip the muzzle towards the floor and swirl the rifle a few times to fill the 18-shot internal BB magazine just behind the bolt. Once that’s done, slide the BB retainer button to closed, so the large reservoir is segregated from the internal magazine. It sounds confusing, but it’s just a nifty way to carry around a pile of BBs but still have an efficient way to load each shot from the smaller magazine in the receiver itself. BBs load through this port just above the grip area and behind the receiver.

As for pellets, you load those five at a time, or less if you like, in the sliding magazine. With its five empty slots, you stuff pellets into each hole, then slide the entire magazine into the right side of the receiver after opening the bolt. After firing a shot, move the magazine to the next position after you retract the bolt. It’s a manual operation, but that’s part of the beauty of a starter air rifle. It’s deliberate and safe. Speaking of safety, there is a manual cross bolt safety just forward of the trigger.

As the name implies, the 760 Pumpmaster is a multi-pump rifle. To power it, the company recommends a minimum of three pumps. The maximum is 10, and you won’t get any more juice if you go beyond that number as I might have been known to do as a youngster. More importantly, over pumping the rifle can result in leftover air in the system which fouls things up. Choose your power level, as long as it’s between three and ten.

I get to test a lot of high-tech and powerful rifles, but sometimes it’s fun to go back to the basics and in the process dredge up some happy memories of blasting tin cans into oblivion. If you’ve got youngsters yearning to learn how to shoot, or just an itch to tinker in the backyard, your childhood rifle is still on the market – only new and improved.