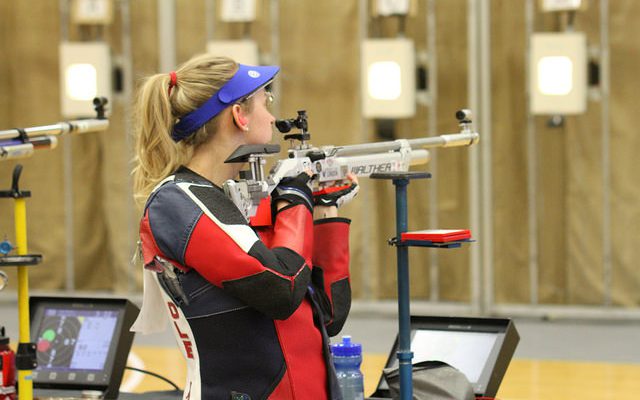 Three days of intense airgun competition concluded with mixed team events Sunday at the Olympic Training Center in Colorado Springs, Colorado. With 600 days remaining until the Opening Ceremony of the 2020 Olympic Games, it was Alison Weisz and Alexis Lagan proving their ready for their Olympic run with top overall performances at the 2018 Winter Airgun Championships.

Nearly 500 athletes from across the United States made their annual pilgrimage to compete in the largest Winter Airgun Championships (WAG) in history. WAG has become an annual tradition for American Air Rifle/Air Pistol athletes every December as the ranges expand throughout the Olympic Training Center campus to include portable targets in gymnasiums to accommodate as many of the competitors as possible. Friday and Saturday included separate Qualifications, with Finals for Open and Junior athletes each day. Things ended Sunday with mixed team competition (one man, one woman per team) in rifle and pistol open and junior divisions.

Top-three finishers, when combining two separate qualification scores and a final, earned their ticket to the 2019 World Cup in New Delhi, India.

In Women’s Air Rifle, Weisz (Belgrade, Montana) eclipsed the top American women’s score in this event since the change to a 60-shot qualification match, with a world-class score of 630.9 on day two and would win the match by 5.8 points overall.  After recently announcing her commitment to shoot at the University of Kentucky, Mary Tucker (Colorado Springs, Colorado) was out to prove why the National Champion Wildcats were so excited to obtain her shooting skill the next four years. She did just that as the 17-year-old earned the silver medal and will compete in her first World Cup next year. Rounding out the top-three was Sagen Maddalena (Groveland, California).

Lagan was impressive as well in Women’s Pistol. She won the Sport Pistol Selection Match that preceded WAG by 14 points, then came in and earned the top step on podium in Air Pistol by 25-points, winning both Qualification matches, both Finals and then shot to gold with partner James Hall (Anniston, Alabama) Sunday in Mixed Team Air Pistol to finish her season in dominating fashion.

In Men’s Air Pistol, it was 2012 Olympian Nick Mowrer (Butte, Montana) earning the victory by 12 points over Hall, with junior Jack Leverett (Bainbridge, Georgia) finishing third. Leverett was stellar throughout the week as well earning top honors in the Rapid Fire Pistol Selection Match. He and his partner, Abeln, finished second and third, respectively, in the two Mixed Team finals they were in Sunday. Hunter Battig (Colorado Springs, Colorado) and Henry Leverett (Bainbridge, Georgia) finished second and third among juniors.

The rifle action continues on this week with a smallbore (.22 caliber) rifle selection match with pre-event training set for Monday, December 3 and concluding with Men’s and Women’s Three-Position Rifle Finals the evening of December 5.