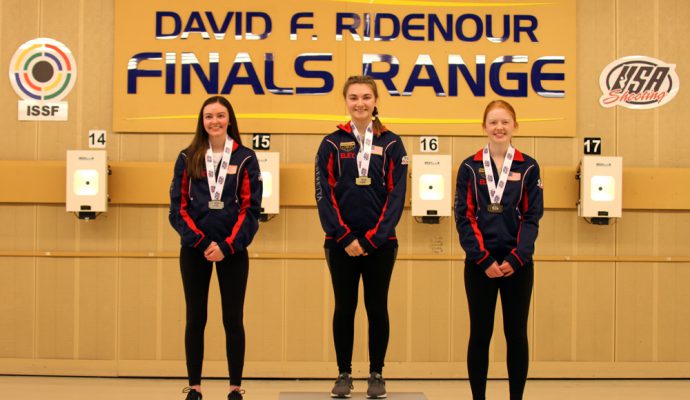 Way, 17, won her first overall medal at NJOSC on her home range before the Final even began, posting two impressive Qualification scores of 623.9 and 623.7. With the two-day total of 1247.6, Way had already put the gold medal out of reach for anyone else, regardless of her finish in the Final. (Additional points – four for first, 3.5 for second, three for third and so on –  were awarded based on finish in the Final. ) As this was a selection match for the International Shooting Sport Federation (ISSF) Junior World Cup in Germany this summer, all athletes shot two Qualification matches and were selected for the Final based on cumulative points. Medals, National Junior Team appointments and slots on the team going to Germany were awarded on the total points from Qualification and Finals finish.

“I was so nervous, even going into Finals because it’s the most fun part of all the matches!” said Way. “I just really wanted to do well, but in the months before this I just trained, and I trained, and I tried to get coaching from everyone I could that was bigger than me or that I knew, and I just knew I was prepared, and I came in mentally prepared, physically prepared – knowing I was ready. This was the first time I’ve won something so big and I’m just so excited because I’ve got my team jacket! It’s been a goal since I was 13 just to get this medal so achieving it just feels so good!” Way, who will enter Nebraska this fall as a freshman, will also make her international competition debut at the Junior World Cup in Germany.

NCAA Air Rifle National Champion Kristen Hemphill (Lohn, Texas) won the silver medal, but the bronze medal was decided in a shootoff between the second-place finisher from the NCAA National Championships Angeline Henry (Fort Worth, Texas) and 15-year-old Katie Zaun (Buffalo, North Dakota). Zaun had won the Final so the additional four points she earned for that effort put her in a tied position of 1244.2 points with Henry. Zaun won the shootoff with Henry, 10.6 to 10.3 for the bronze.

Results from this match: https://bit.ly/2KDt1lG.

The 202 athletes competing in Women’s Air Rifle won their chance to compete at NJOSC because of their finishes at the state-level Junior Olympic matches. Overall, 607 athletes from 48 states will compete in Rifle, Pistol and Paralympic events throughout the three-week NJOSC. The NJOSC features the top 34 percent of all competitors in 2019 and will feature invitees that either won their state championship or were selected based on a score they attained.  The competitors range in age from nine to 20 years old.

View and download images from the Women’s Air Rifle competition at NJOSC: https://flic.kr/s/aHsmCTRHzq.