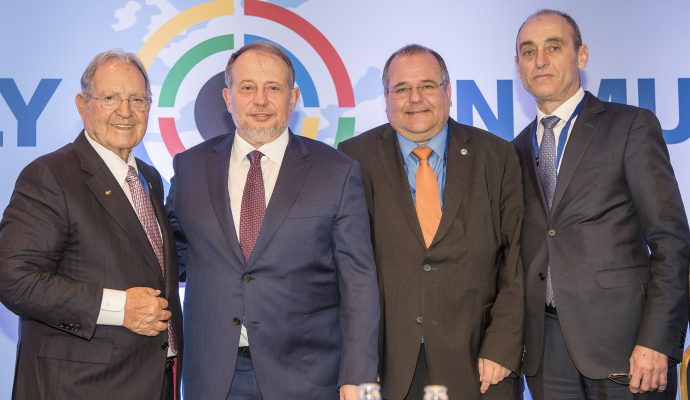 At the ISSF General Assembly held today at the Munich Park Hotel, in Germany, 136 member federations were present, in addition to 23 proxies, for a total of 159 represented federations and 292 votes, out of the maximum possible representation of 160 member, 147 countries, and 294 votes.

Mr. Vladimir Lisin (62) is a Russian entrepreneur holding Ph.Ds in Engineering and Economics, and the Chairman of one of the world’s leading steelmaking companies, NLMK Group. He practices shooting sport since the age of 14, and has been involved in the management of the sport since years. In 2002, Mr. Lisin became President of the Russian Shooting Union, and since 2009 he has been leading the European Shooting Confederation (ESC). From 2009 to 2013 he served as a member of the ISSF Administrative Council, and since 2011 he is the President of the Summer Olympic Sports Association of Russia. In 2013 he became a member of the ISSF Executive Committee, winning then the votes of the delegates at the 2014 ISSF General Assembly to become ISSF Vice-President. At the same time, he has been serving the IOC as a member of the IOC Commission for Culture and Olympic Education (2006-2014) and in the IOC Marketing Commission (2015- onward).

Today, Mr. Lisin becomes the 7th President of the International Shooting Sport Federation since its foundation in 1907. He succeeds Olegario Vázquez Raña, who led the ISSF for 38 years. Vazquez Raña stepped back this morning, following a decision he had made public in 2014. He was elected ISSF Honorary President by acclamation by the General Assembly, right after his farewell speech, today.

In his speech, before the vote, Mr. Lisin talked about the introduction of new committees to widen the representation within the decisional bodies of the ISSF, to make the role of continental confederations more significant and to increase the level of the shooting competitions.

“I don’t want to make empty electoral promises. There’s a lot of work to do for all of us. We should respect the interests of all federations and all continents.”

“We will support all member federations who really intend to develop the shooting sport in their countries. My recent trips to America and Africa showed that we have a lot to do.”

Right after the result of the election was announced, he added: “Thank you for your trust!”

With 161 votes out of 290, Mr. Alexander Ratner was elected as the new ISSF Secretary General, beating two other candidates: Ms. Melis Giraud of Turkey (85 votes) and Mr. Javaid S. Lhodi of Pakistan (36 votes). Two other candidates, Mr. György Nagy of Hungary and Mr. Hamed Safeeldin of Sudan, withdrew. Ratner takes the seat held by Germany’s Franz Schreiber since 2010. Schreiber did not seek re-election, as he retired today after his report to the General Assembly.

Mr. Ratner (63) is a Russian sports manager with a German citizenship. His career started as a member of the Organizing Committee for the 1980 Olympic Games in Moscow, and worked with the IOC President Juan Antonio Samaranch for 25 years. He served as a member of the IOC Press Commission (1997-2013), of the “Sport for All” Commission (2014-2015) and of the “Sport and Active Society” Commission (2016- onward), and received the Olympic Order in 2001.

The new Secretary General has already worked together with President Vladimir Lisin at the European Shooting Confederation, in the same roles, throughout the last five years.

In his speech before the vote, Mr. Ratner said:

“Our experience in the European Shooting Confederation proves that we are a team and we work well together, in the interest of our members.”

“The mission of the Secretary General is to serve the ISSF, the member federations and the President. The mission is to fulfill your decisions,” he added, addressing the General Assembly.

Later this afternoon, delegates also elected the four ISSF Vice-Presidents: Mr. Kevin Kilty of Ireland (162 votes), Raninder Sigh of India (161 ), Robert Mitchell of USA (153), and Wang Yifu of the People’s Republic of China, who was re-elected with 146 votes.

The ISSF General Assembly will continue tomorrow, 1 December, as delegates are called to elect the new ISSF Administrative Committee, the Chairmen of the Sections Committees (Rifle, Pistol, Shotgun, Running Target, Judges, Statutes and Eligibility, Medical), the Auditors, and the ISSF Honorary Members. On the agenda of the delegates there’s also the decision on the host of the 2019 ISSF Shotgun World Championship, and several other regulatory and administrative decisions.