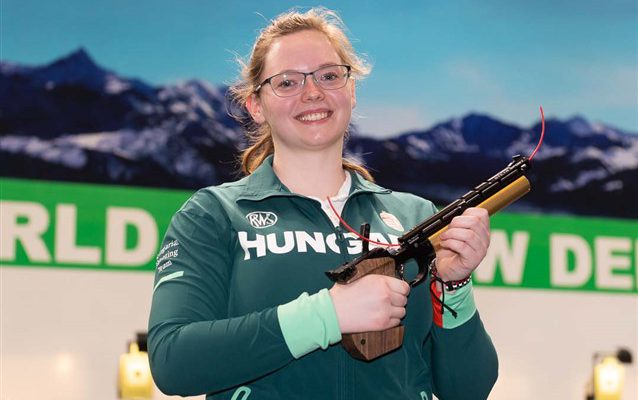 After leading the 25m Pistol Women event on the 24th of February – when she won gold and an Olympic quota for Tokyo 2020 – she pocketed today’s 10m Air Pistol Women gold medal.

The 21-year old athlete scored 245.1 points, with an average higher of 10.2 points per shot throughout the 24 final shots, leaving her opponents more than 6 points behind her. That means she turned out to be almost unreachable, by the time the medals were assigned.

She had never won an ISSF world cup before. So, is she the new kid in town?

Not really. We met her before, as she’s been one of the most successful junior athletes of the last years. She won three Junior World Championships, and 7 Junior European Championships.

But there’s an important detail to mention: she won all those junior medals in a different discipline.

She was indeed a Running Target shooter. That’s a different style of shooting, involving rifles and not pistols. That’s a discipline that used to be an Olympic sport, until Athens 2004, when it was scrapped from the Olympic program.

“I started when I was a kid,” the 21-year old said. “My cousins were shooting, they told me it was fun, and I joined the local club. I was probably 12-year old.”

“I love Running Target, but I had a dream. An Olympic dream.”

“That’s why I switched to pistol shooting. That was some 4 or 5 years ago.”

Veronika did not really quit her first discipline, though. “I still shoot Running Target, but just once per week. I like it. I like both disciplines. I actually love everything of this sport!”

With her 25m Pistol Women victory, achieved here in New Delhi, she also gained a pass to the Tokyo 2020 Olympics.

The dream is about to become true.