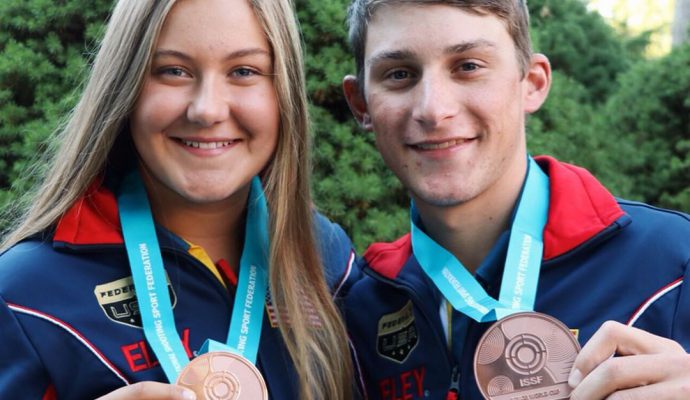 Another day, another medal for America’s shotgun program. Tuesday it was Carey Garrison and Roe Reynolds turn with a bronze medal in the Trap Mixed Team event of the International Shooting Sport Federation (ISSF) Junior World Cup taking place in Suhl, Germany.

The reigning Open National Champions in the Mixed Team event, Garrison (Crossville, Tennessee) and Reynolds (Quitman, Arkansas) had some revenge on their mind after a score of 126/150 for 18th-place in the same event at the Junior World Championships on July 4. Behind the strong 73/75 from Reynolds in Qualification, they shot a combined 139 Tuesday, which would have been good enough to place them third and into the bronze medal match at Worlds. Today, that score placed them fourth after Qualification and paired them against the Great Britain duo of Lucy Hall and Theo Ling, who finished one target better in qualifying.  In their respective Individual events, Hall finished fourth while Ling placed 23rd.  Garrison finished ninth Monday with Roe coming in 30th.

After 30 shots, the bronze medal was in jeopardy after Reynolds and Garrison missed four of the 10 targets they saw between shots 20 and 30, with Hall and Ling missing just one during that same stretch to open up a three-target advantage with 20 shots remaining for each team. Hall and Ling still had a two-target advantage before the final 10 targets, when the American duo rallied to steal the victory.  Garrison missed one of her five targets and Roe was perfect, while their British counterparts missed five of their final 10, to seal a two-target advantage by the end.

The team of Manhave and Steven Brown (Anchorage, Alaska) finished 12th with a combined score of 132.

Sport Pistol events concluded as well for both Men and Women, with Ada Korkhin (Brookline, Massachusetts) and Abbie Leverett (Bainbridge, Georgia) finishing together with scores of 568, good enough for 24th- and 25th-place. On the men’s side, Ryan Yi (Diamond Bar, California) finished 41st (559) while Paul Kang (Los Angeles, California) was 43rd (559) and Luke Simon (Colorado Springs, Colorado) was 47th (558).

Men’s Rapid Fire Pistol got underway Tuesday as well with Yi sitting in 21st position, followed by Kang in 31st with Bryston McPherson (Colorado Springs, Colorado) experiencing his first overseas match and putting forth a result that has him in 45th-place currently.

Competition on Wednesday will include the conclusion of Rapid Fire Pistol, as well as match day for Women’s Air Pistol and Mixed Team Air Rifle, along with the start of the Men’s and Women’s Skeet.