You are here: Home / Competition / USA Shooting Board of Directors Host Meeting During Rifle/Pistol National Championships 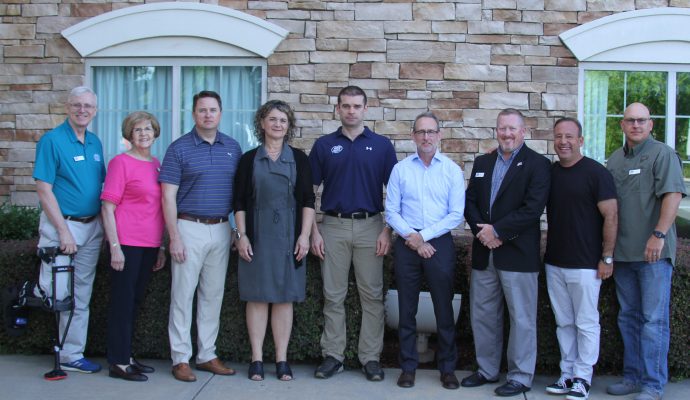 USA Shooting began the meeting by welcoming its two newest Directors including Ana English and Matt Suggs that were named to BOD as Independent Directors back in late May. One key focal point of the meeting was the discussion of the CEO transition plan given the pending departure of CEO Keith Enlow as announced June 18 (RELEASE). The BOD went into executive session late in the day to plot a path forward. They exited by announcing Chief Operations Officer Bob Gambardella as the interim CEO for a six-month term and tabled procedures for a new CEO search until after that time.  A veteran Olympic sports administrator, Gambardella started in his role as Chief of Operations back on May 28. FULL RELEASE

“We’re extremely fortunate to have the experience and capabilities that Bob has to guide us during this transitional period,” Whittenburg said. “The mission remains the same and that is to make sure our athletes are taken care of and they have every opportunity to be successful.  In granting Bob this opportunity, USA Shooting’s Board of Directors has all the confidence in his proven leadership and know that he’ll succeed in leading this effort, building momentum toward 2020 and beyond, and ultimately help our athletes and organization raise the flag.”

Club coach Manuel Snyderman (pictured center) addressed the BOD early in the day with an impassioned plea for USA Shooting to rally around its grassroots athletes and clubs. A competitor and coach out of the Maspenock Rod and Gun Club, Snyderman felt moved to confront the BOD on the ‘systematic disconnect’ present between USA Shooting and their support of elite athletes and the lack of overall community involvement.

“What does USA Shooting do for me,” Snyderman asked.  “I do everything for USA Shooting, but USA Shooting doesn’t do anything for me. Make me and others like me want to come to these Nationals. Stop treating us like second-class citizens and end this elitist attitude.”

He then provided several areas that he said would go a long way in supporting member clubs, developing athletes and potential coaches including more community involvement and visibility from athletes and coaches at the highest level into the local clubs; and teaching coaches how to shoot and how to train Olympic-style shooting disciplines.

“I believe this is exactly what this organization and the Board needed to hear,” said BOD Athlete Representative Jim Henderson. “The athletes, all levels of experience, have been over looked for too long. Without the club level participation from guys like Manny, we as an organization will not succeed. I’d like to publicly thank Manny and his friend Gerry for saying what I’ve been telling the Board. It makes a huge difference coming from him in the manner he did it.”

One key motion brought forth by Athletes Advisory Council representative Keith Sanderson, and unanimously passed by the BOD, that will create immediate impact for competitors is that camouflage clothing will now be acceptable apparel at all USA Shooting sanctioned matches.

“While we understand the intention of the rule at the international level, America’s shooting team athletes rely heavily on our shooting heritage as the roots and foundation that got many of us into the sport,” Whittenburg states. “It is important that our athletes are allowed to stay true to who they are and what they represent.”

Other motions that passed Tuesday included the approval to hire BiggsKoford as the official audit firm for USA Shooting as well as to move forward with filling the tenth BOD seat, an Advisory Council representative as mandated by USAS bylaws. As recommended by the Nominating & Governance Committee chaired by Rick Marsh, USA Shooting staff and BOD will work together to bring forth appropriate nominees within the shooting community in the formation of the Advisory Council to include different member groups that will be identified.

Ana English put forth a resolution calling for USA Shooting to readily commit to adhering to its Bylaws and ensure complete compliance at every level.

The Board heard presentations from CEO Keith Enlow about the 18-month progress made by USA Shooting that included updates on athletes, staff, marketing, financials and commercial effectiveness. Enlow also provided his key observations and recommended focus areas for the BOD and staff to address. Committee reports were given by committee chairs and staff provided updates on key operational areas. Rick Hawkins resigned from his role as Board Treasurer, a role English will now assume.

USA Shooting’s Rifle/Pistol National Championships are currently underway and will see live action through Saturday. Athletes are vying for spots to compete in the upcoming International Shooting Sport Federation (ISSF) World Cup in Brazil as well as the Para Pan American Games and the upcoming World Shooting Para Sport (WSPS) World Championships. Additionally, athletes will use Nationals as the prep and test needed ahead of the upcoming Junior World Cup as well as the Pan American Games.