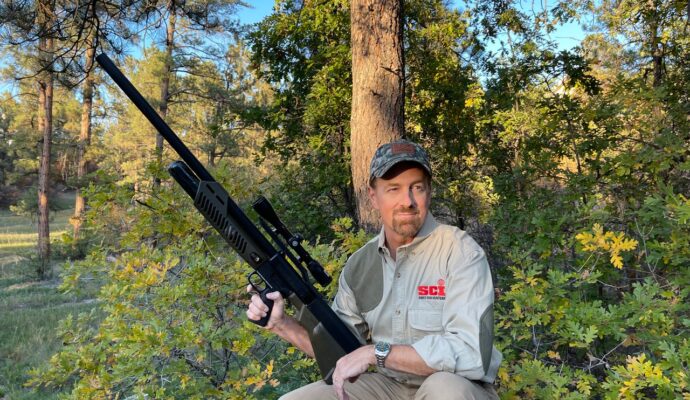 Dorsey Pictures announces that Umarex Airguns will continue to be the official airgun sponsor of the hit outdoor series Sporting Classics with Chris Dorsey through the 2023 broadcast season.  The sponsorship pairs the world’s most watched outdoor TV series with one of the world’s leading manufacturers of premier airguns and airgun accessories.  Umarex Airguns have been featured in the televised hunts for hog,whitetail and plainsgame.

“We are proud to continue our partnership with Umarex through 2023 and beyond,” says host Chris Dorsey.  “This isn’t your grandfather’s airgun… I’ve seen the Umarex hammer take down some of the toughest plainsgame in Africa.”

With 50 years of experience in the industry, Umarex makes rifles that are capable of hunting anything from the common squirrel to whitetail deer to the Cape buffalo. Umarex Airguns provide the power and precision of innovative technology and in-the-field tested performance.

Sporting Classics with Chris Dorsey is a joint venture between Dorsey Pictures, the largest producer of outdoor lifestyle programming in history and Sporting Classics magazine, the award-winning 40-year old premium outdoor magazine that showcases the history, art and romance of the outdoors.  The series airs on Outdoor Channel every Saturday at 12:30 pm et, with additional airings on Monday at noon, Wednesday at 9 am, Friday at 7 am and Sunday at 4:30 am (all times ET).  Sporting Classics with Chris Dorsey is sponsored by Sporting Classics Magazine, Umarex Airguns. Winchester Ammunition, Winchester Repeating Arms, Silencer Central, Walther Arms, Safari Club International, Negrini Cases, Riton Optics, and Animal Artistry.

Host Chris Dorsey has been called the ‘brand-father’ of outdoor television having helped create and launch almost 60 series in the outdoor genre and an equal number of series in mainstream television, including for such networks as ABC, Discovery Channel, History Channel, HGTV, Travel, DIY, ESPN, WGN America, National Geographic, Nat Geo Wild, Destination America, Oxygen, and all the outdoor networks. Dorsey formerly served as editor in chief of Sports Afield and Ducks Unlimited magazines, is the author of 12 books, and is a regular contributor to Forbes. His work also has appeared in The Wall Street Journal, National Geographic, Newsweek, and The Robb Report. He’s among the world’s most widely traveled hunters having taken the 29 big game species of North America, the deadly seven species of Africa, the spiral horns of Africa and the wild turkey world slam.  He’s a member of the Outdoor Legends Hall of Fame and is a recipient of the Ray Scott Trailblazer Award as well as the Curt Gowdy Memorial Award.  Dorsey has also served in board and advisory positions of numerous conservation and sporting advocacy organizations.