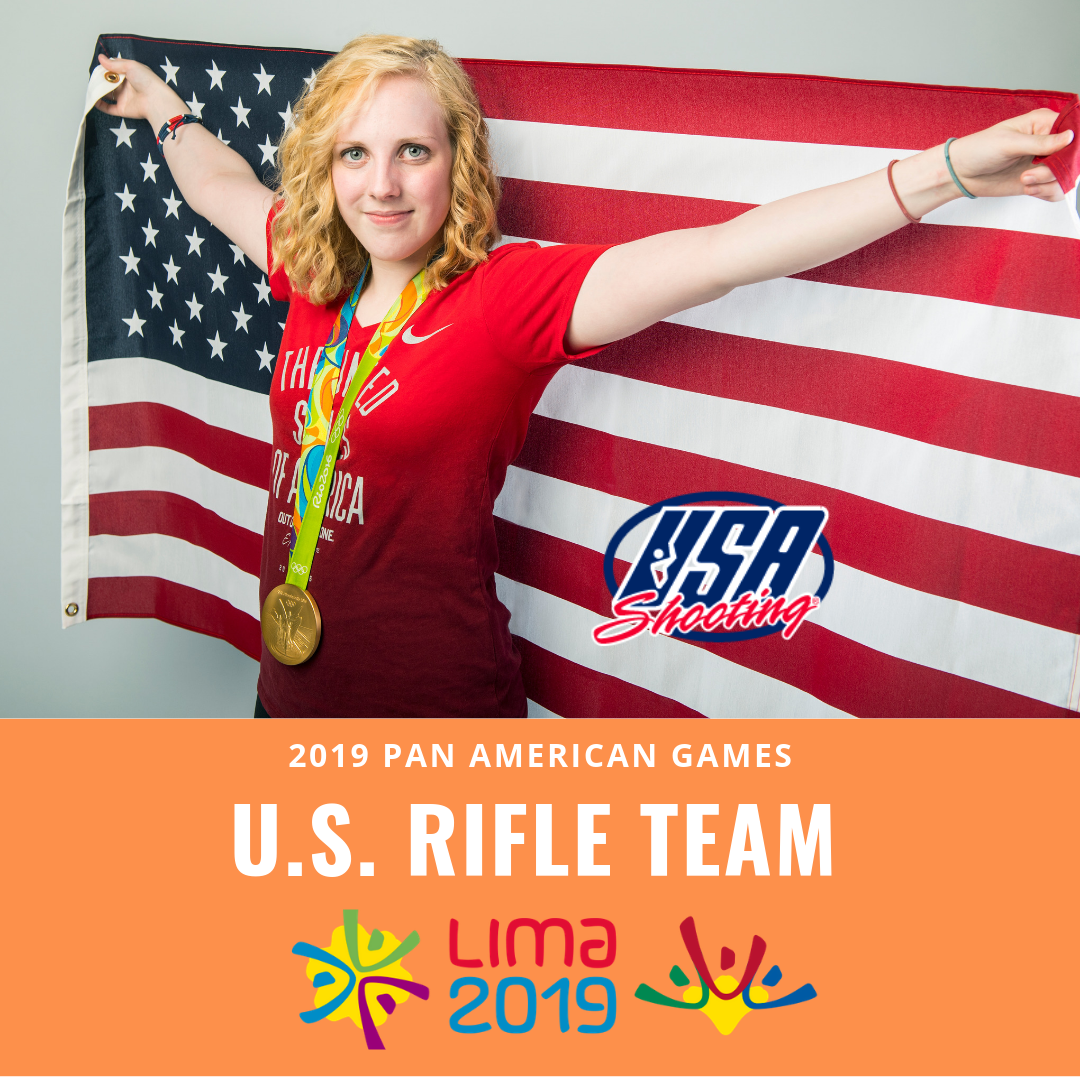 (COLORADO SPRINGS, Colorado – June 14, 2019) – Seven U.S. Rifle athletes, including Olympic gold medalist Ginny Thrasher, have earned the opportunity to compete for Team USA at the 2019 Pan American Games in Lima, Peru. The XVIII Pan American Games will be contested July 26 – August 11 and will feature over 6,500 athletes from 41 nations.

Athletes were determined based on results of the 2019 Spring Selection Match that took place March 25-30 in Fort Benning, Georgia.

In search of three Olympic quotas, Team USA will include the reigning Olympic champion Thrasher (Springfield, Virginia), although she will not be competing in the Air Rifle event that she earned gold in.  She’ll be joined by her 2016 Olympic teammates Michael McPhail (Darlington, Wisconsin) and Lucas Kozeniesky (Fairfax, Virginia).

Previously earning an Olympic quota for Team USA, Mindy Miles (Weatherford, Texas) and Sarah Beard (Danville, Indiana) will also compete. Both athletes earned quotas at the 2018 Championship of the Americas in Air and Three-Position Rifle respectively and are unable to earn another quota. That means the burden to earn the other quota in those events falls to Ali Weisz (Belgrade, Montana) in Air and Thrasher in Three-Position.

Both available quotas have been earned in Men’s Three-Position Rifle which is where two-time Olympian McPhail is slotted to compete alongside his U.S. Army Marksmanship Unit (USAMU) teammate Tim Sherry (Highlands Ranch, Colorado).  Sherry will also compete in Air Rifle where the other quota opportunity lies with Kozeniesky and in the Mixed Team Air Rifle competition with Weisz.

This will be the first Pan American Games for Thrasher, who recently graduated from West Virginia University with a degree in biomedical engineering.  While at WVU, Thrasher earned 12 All-America awards; all but one were first-team accolades. She won the 2016 NCAA smallbore and air rifle titles and helped lead the Mountaineers to two NCAA National Championships.

Gunning for a third Olympic opportunity, McPhail had to re-invent himself after his discipline (Prone Rifle) was eliminated from the Olympic program after 2016. He’s proven that makeover is going along fine after earning a bronze medal at the 2018 World Championships and winning the Spring Selection Match.  He’ll compete in his fourth Pan American Games in Peru hoping to earn his fourth medal.

Kozeniesky finished second at the 2018 Championship of the Americas in Air Rifle behind teammate Dempster Christenson, but only one quota was available.  He finished 21st in the event at the Rio Olympic Games.  In February, he won both Rifle events at the Robert Mitchell Rifle Championships and achieved a world-class score of 630.0 in a local Air Rifle competition.  It’s that type of effort he’ll need to snare the second Air Rifle quota.

Miles is taking time out from her coaching responsibilities as new assistant rifle coach for the University of Nebraska to compete for Team USA this summer.  She earned an Air Rifle quota previously by winning Championship of the Americas. Her highest World Cup finish is ninth, back in 2018 at Changwon, South Korea.

Beard was a Championship of the America’s winner to earn a quota in Three-Position Rifle.  She’ll compete in her second Pan Ams after debuting in 2011 with a bronze medal.  With a high finish of fourth, Beard has seven top-10 World Cup performances.

Weisz finished second to her friend Miles at Championship of the Americas and will try to duplicate that performance among the Americas best shooting competition.  She’s competed in four World Cup events throughout 2018 and 2019, with a high finish of 14thearlier this year in Beijing.

Settling into a groove at the USAMU is Sherry, who has shown real signs of stepping up to that next level competitively. Proof of that was the world-class Air Rifle score of 630.9 he shot during Spring Selection Match to top all competitors.  He’s the only U.S. athlete shooting two individual events in Rifle. He’s competed in four World Cup matches the past two years, finishing as high as 18th in Air and 23rd in Three-Position.

Sherry will team with Weisz in the Mixed Team Air Rifle event as the duo has shown their ability to perform following a fourth-place finish in Beijing.  Miles and Kozeniesky will form the other team in the event.

The Pan American Games are the world’s third-largest international multi-sport Games featuring athletes from countries in the Americas. The first Pan Am Games were held in Buenos Aires, Argentina, in 1951, and are held every four years. From July 27-August 3, shooting competition will take place at the Las Palmas Air Base. The U.S. Shooting Team earned 13 medals (four gold, six silver, three bronze) at the 2015 Pan American Games in Toronto, Canada.