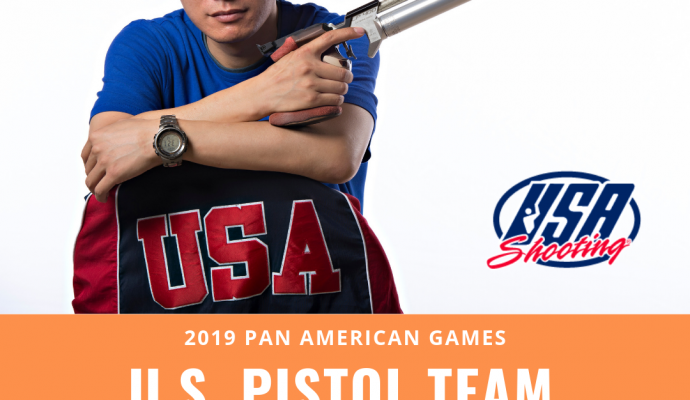 Seven U.S. Pistol athletes, including four Olympians, have earned the opportunity to compete for Team USA at the 2019 Pan American Games in Lima, Peru. The XVIII Pan American Games will be contested July 26 – August 11 and will feature over 6,500 athletes from 41 nations.

Athletes were determined based on results of the 2019 Spring Selection Match that took place March 25-30 in Fort Benning, Georgia.

Previously earning quotas by winning the 2018 Championship of the Americas was Alexis Lagan (Boulder City, Nevada) and James Hall (Colombia, Missouri) in Women’s Sport Pistol and Men’s Air Pistol.  Given that there are still quotas needing to be obtained in each of those events, Lagan and Hall both declined their invitation to participate, freeing up spots for their teammates to go and try to earn a quota. Lagan won Spring Selection while Hall was second.  Earlier this year, Henry Leverett (Bainbridge, Georgia) earned a quota in Men’s Rapid Fire Pistol after a fifth-place finish at a World Cup in Beijing, China. He finished second at the Spring Selection Match, but would give up his spot after the achievement.

Sanderson will be making his first appearance at the Pan American Games since 2007 when he earned silver in the Rio de Janeiro. The 44-year-old has competed in four World Championships and 50 World Cup matches, earning medals in 10 of them.

Mowrer is a 2012 Olympian in the now discontinued event of Free Pistol that will be competing in his third Pan American Games and looking for his first Pan Am medal after previous finishes of fifth, sixth and ninth. He finished fifth at the Championship of the Americas in 2018.

Shi, Uptagrafft, Tobar and Todorova proudly represent Team USA as naturalized citizens. Shi was born in Beijing, China and finished 18th in Air Pistol at the 2016 Olympic Games. He helped earned his spot to Rio de Janeiro by placing second in the event at the 2015 Pan Am Games and earning the Olympic quota for Team USA.

Uptagrafft was born in Singapore and will be competing in her fifth-straight Pan Am Games, having previously earned gold medals in Sport Pistol in 2003 and 2007 while earning silver in 2011 and 2015 and adding a bronze medal in Air Pistol as well in 2011. She finished third at the Championship of The Americas in 2018 in Sport Pistol.

Tobar competed for the Columbian National Team through 2011 before becoming a U.S. citizen.  She has participated in two previous Pan American Games in 2003 and 2007, earning a bronze medal in Sport Pistol at the 2003 Pan Ams in the Dominican Republic. Her father, Bernardo, is a Columbian shooting legend, having competed in four Olympic Games and finishing sixth in the 1988 Seoul Olympics.

Todorova competed for Bulgaria as recently as 2006, participating in two World Championships. She finished second at the 2002 World Cup in Milano.

Henry Leverett declining his chance to compete in Peru opens up the chance for his older brother, who finished third at the Spring Selection Match in Rapid Fire Pistol.  Jackson finished 12th at a World Cup event in 2018 and was eighth at Championship of the Americas.

The Pan American Games are the world’s third-largest international multi-sport Games featuring athletes from countries in the Americas. The first Pan Am Games were held in Buenos Aires, Argentina, in 1951, and are held every four years. From July 27-August 3, shooting competition will take place at the Las Palmas Air Base. The U.S. Shooting Team earned 13 medals (four gold, six silver, three bronze) at the 2015 Pan American Games in Toronto, Canada.

The U.S. Rifle Team will be announced on Friday, June 14. The U.S. Shotgun Team announcement was released May 28.  READ MORE . . .