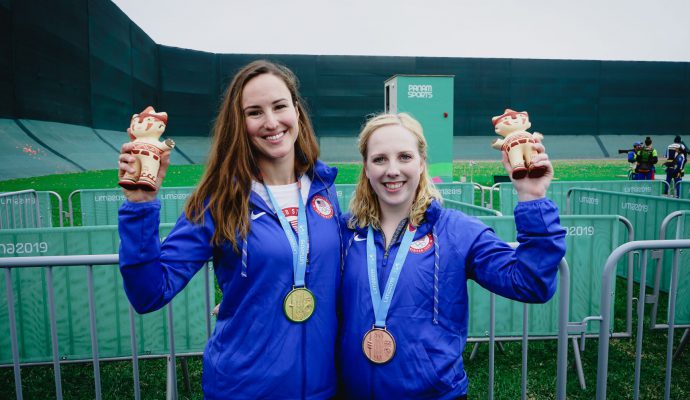 The U.S. Women were clutch in Three-Position Rifle, finishing with two medals and, most important of all, the Olympic quota in the event. Sarah Beard (Danville, Indiana) is your 2019 Pan American Games gold medalist thanks to her outstanding prone results. Having already earned one of the two Olympic quotas at the 2018 Championship of the Americas, Beard had one thing on her mind with her participation in the Pan American Games – champion of the Americas – and setting up her attempt to qualify for her first Olympic Games starting this fall.

To get there she shot a second-best Qualification score of 1165 that included a perfect 400 in the Prone stage. In the Final, she was third after the first stage of kneeling, second after prone and then took a stand in standing to ensure her golden finish after struggling in that stage in Qualification. She’d finish .7 points ahead of Cuba’s Eglys De La Cruz in the end.  If she had finished second there would have been no quota for Team USA on this day.

“As always, it’s an honor to represent Team USA on the podium,” Beard said. “It’s even better sharing it with a teammate. “I’m happy to come home having accomplished my job. Big thanks to Perú for putting on an awesome competition so far, and also to our coaches and staff for providing constant support!”

Beard was joined on the medal stand by 2016 Air Rifle Olympic gold medalist Ginny Thrasher (Springfield, Virginia). The medal is secondary to the fact that Thrasher earned an Olympic Quota.  She does so because Beard had already earned the Quota and so the next top-two finishers earn the Quota at the Pan Am Games, meaning De La Cruz and Thrasher gladly earn the quotas for their country. Thrasher qualified fourth with an 1162. She was fourth heading into the final stage of standing before pulling off the highest five-shot string of the eight competitors with a 51.2 (10.24 average) to help earn a most-important medal.

“A bronze medal has never felt so much like gold to me,” Thrasher explained.  “Any day I can represent my country on the podium is a great day and being able to win a quota for Team USA to compete in Tokyo is an achievement I’m proud of. Peru has been such a great host country to us and getting to share the podium with my teammate on such a beautiful range made today even more special.” 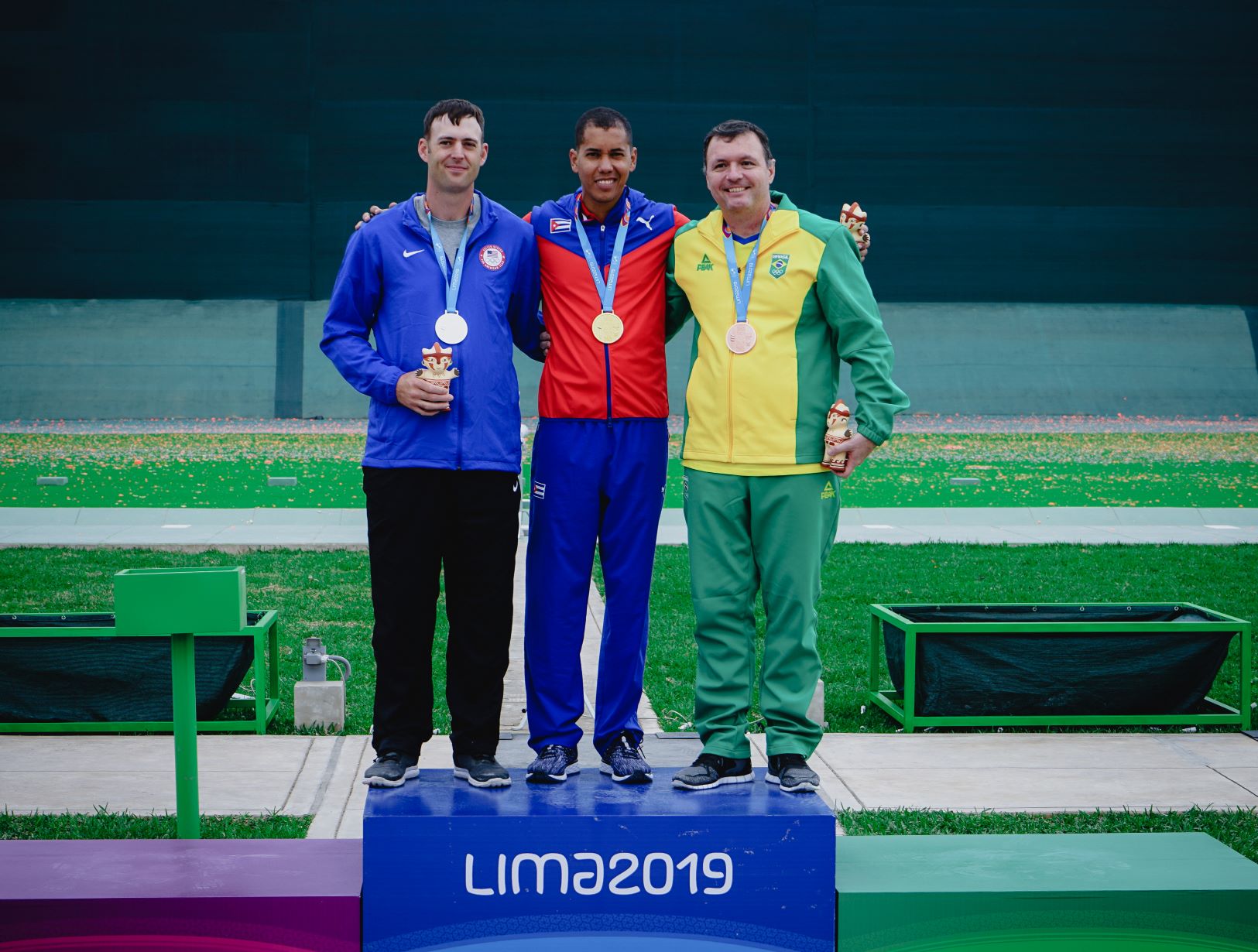 The fun didn’t stop there as both men qualified for the Final in Air Pistol, with Nick Mowrer (Butte, Montana) qualifying first and Jay Shi (Phoenix, Arizona) seventh. These two Olympic veterans were also seeking an additional Olympic quota in this event following in the footsteps of James Hall who did so at the 2018 Championship of the Americas.  The 2015 Pan Am silver medalist, Shi wasn’t able to equal that performance Sunday with five of his 12 Finals shots in the eight-ring, forcing his exit in eighth place.

Mowrer was seventh after his first 12 shots in the Final before starting his climb.  A 10.04 average over his next 12 shots would allow him to climb five spots and into second.  A score of 8.5 on his second-to-last shot would end his rally, but not before he had done enough to finish the mission of earning that second Olympic quota. Mowrer was ninth four years ago at the Pan Am Games in Toronto, Canada.

“Obviously, getting the Olympic quota place is hugely important,” Mowrer said. “That’s what we came here for to send two people to Tokyo, so mission accomplished.”

Then in true Mowrer fashion he pulled out the racing analogies and finished by saying: “Just like to thank the sponsors, driving hard out there and getting it towards the Games! Got two spots now so going to drive home the training and prepare the best we can. Got a good pit crew helping along the way too, so just waking up each day and laying the rubber down!”

Also getting underway Sunday was Women’s Trap competition featuring World Champion Ashley Carroll (Solvang, California) as well as World Championships Team member Rachel Tozier (Pattonsburg, Missouri). Things are looking good for more medal success Monday with these two atop the standings after 75 of 125 targets. Carroll shot a 72 with Tozier one behind with 71. Stefanie Goetzke of Guatemala shot a 68 and is presently in third place. Monday brings the final 50 Qualification targets plus the Final. The U.S. women have already earned the two Quota spots available in this event with Carroll doing so earlier this year at a World Cup stop and Kayle Browning getting it done last year at the Championship of the Americas.

In addition to Women’s Trap conclusion, Monday’s shooting action will include the Mixed Air Pistol event with Mowrer teaming with Todorova while Shi and Tobar go at it together as well. Also getting underway is Day 1 of 2 in Men’s Trap featuring Derek Haldeman (Sunbury, Ohio) and Brian Burrows (Fallbrook, California) as they seek two Olympic quotas in this event. 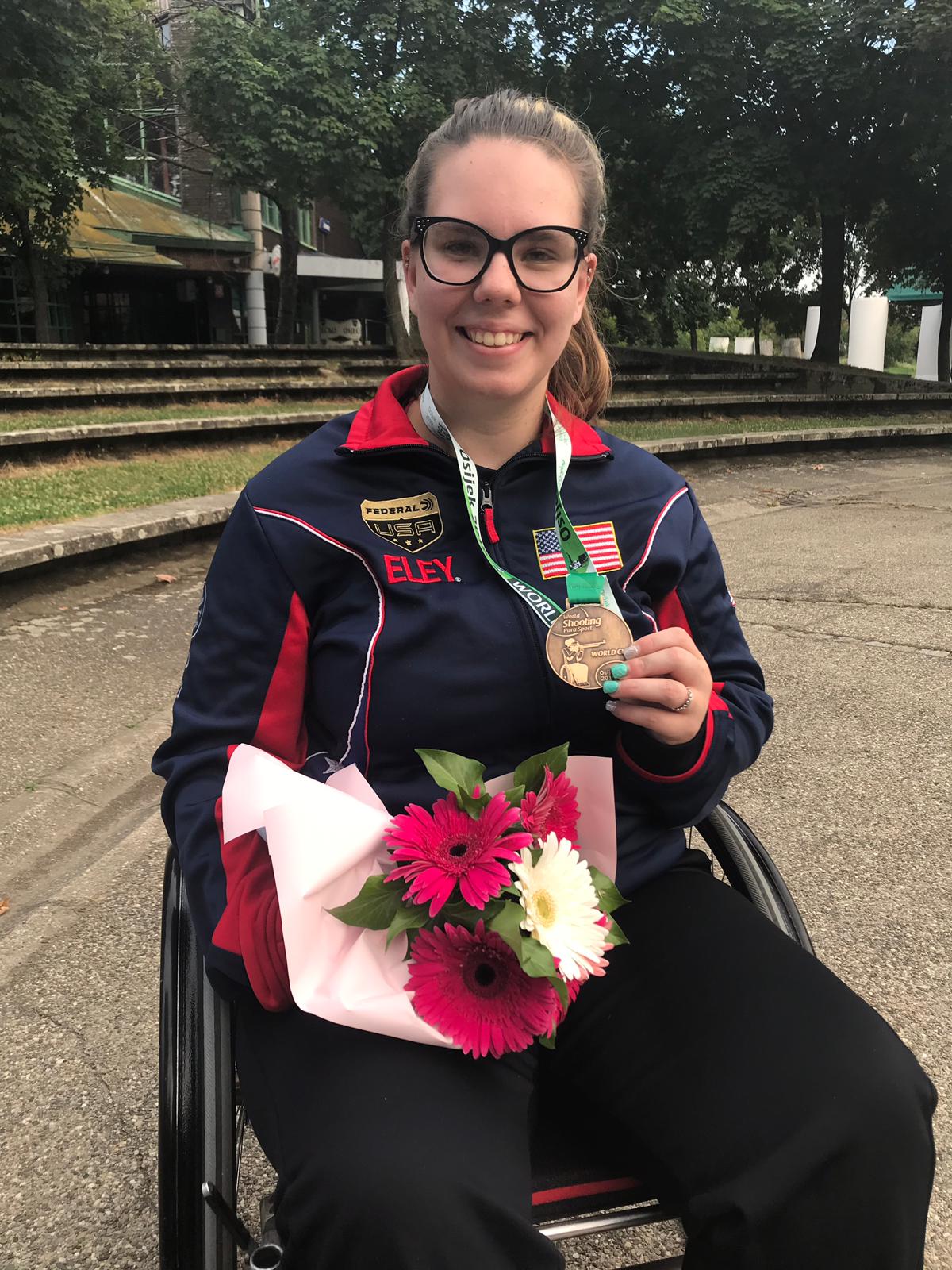 World Shooting Para Sport has returned to Osijek for the third time and its the first WSPS competition that includes Rifle, Pistol, Para Trap, and Visually Impaired (VI) competition.

The Paralympic hopeful Farmer raised the flag Saturday in the Prone Air Rifle event (R3 SH1) after finishing sixth in Qualification with a 632.7 and then moved herself up three spots with some great shooting, finishing just behind the reigning Paralympic gold medalist in the event Veronika Vadovicova of Slovakia and 2008 Paralympic gold medalist and 2012 Paralympic silver medalist Matt Skelhon of Great Britain. She just missed another medal with a fourth-place finish in Women’s Standing Air Rifle event (R2 SH1).

Open to athletes who have a vision impairment, the discipline of VI shooting is a challenge of accuracy and control, in which competitors use air rifles to fire a series of shots at a stationary target. Athletes use an audio signal to guide them in their aiming, with the audio signal rising in pitch as the point of aim moves nearer to the center of the target.