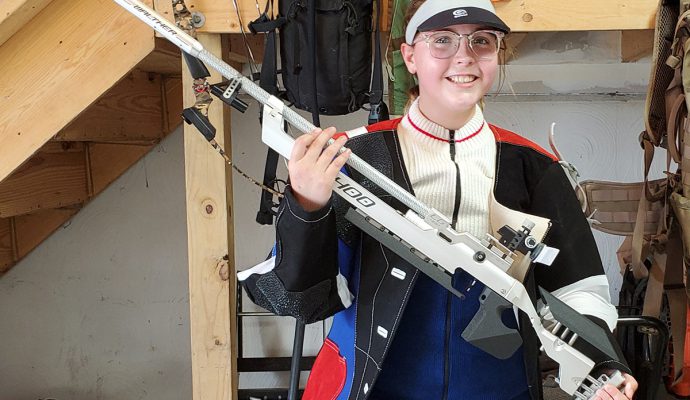 A year and a half after her first ever highpower match, Shannon Moriarty of Maryland has made significant strides in her scores, experiences and level of competition. At only 11 years old, she is an inspiration for young marksmen. Shannon has gathered success from a combination of natural talent and hard work through dry-fire training and now cross-training with air rifle.

Shannon attended her first National Matches at Camp Perry, Ohio, in 2019, at the age of 10. Despite its reputation for difficulty, Shannon named the President’s 100 Rifle Match as her favorite of the National Matches. Though she over-rotated her scope turret and shot all misses at 600 yards during the competition, the mistake presented a significant learning opportunity to keep in mind at future matches.

That same year, the night before her next National Matches competition, the National Trophy Individual (NTI) Match, Shannon strategized with her father, fellow competitor Chris Moriarty.

“We talked about if I shot a miss in standing I would either come a full rotation up or a full rotation down, and my first shot was a miss, but then I came down and I shot a 10!” Shannon revealed.

Currently, Shannon holds an NRA Master and a CMP Expert classification in highpower rifle. Shannon relived her classification win during the Reade Range Regional CMP 800 Aggregate. After winning the Sharpshooter class in 2019, she returned in June 2020 to win the Expert class with an impressive 773-24x.

Part of this success may have come from an inspirational and special gift Shannon received in May at the same range.

“Amanda Elsenboss was scoring me,” Shannon said. “After I finished the match, I was putting away my gear at the truck. Amanda walked over and gave me a brand new Geissele trigger which she won during the NTI for High Woman in 2015.”

Elsenboss, a former member of the Army Marksmanship Unit and champion rifle competitor, was Shannon’s original Small Arms Firing School Coach at the CMP’s Eastern Games (held every year at Camp Butner in North Carolina) when Shannon first started shooting highpower. She is the person Shannon looks up to most in the shooting world.

“You can have this trigger which I got for winning high woman. Once you win yourself one, you can give this one back to me,” Elsenboss told Shannon. Elsenboss described it as “sort of an incentive for Shannon. Realistically, Shannon is shooting a winning trigger and needs to know she’s capable of winning herself one.”

Shannon has set several goals for her marksmanship career. These goals include a spot on the President’s 100 at the National Matches, High Master classification and earning a Distinguished Badge. She also wants to fire a perfect score at 600 yards, which is something she watched Amanda Elsenboss do.

“I’ve cleaned a few strings of rapid-sitting and sometimes rapid-prone, and I came really close to shooting a complete clean at Marysville and at York for sitting and slow-prone,” Shannon said.

Even so, Shannon spends most of her time training for the standing position.

She has followed a strict training regimen since she started shooting and attributes a lot of her success to her heavy usage of the SCATT system – an electronic training tool that uses computer software to monitor hold, follow-through, focus and other shot elements.

Shannon shoots 30 shots standing, plus sighters, with a SCATT trainer three times a week, every week. She sometimes practices prone shooting too.

“There’s a feature in SCATT system for acoustic signaling for blind shooting and biofeedback. When using this feature, there is a very high frequency tone when you go into one of the rings.” Shannon and her father, Chris, set this tone to sound when they are holding in the ten ring.

“The goal is to shoot a 10 or an X and then keep it there for three seconds,” Shannon says. “And the tone should still be on for those three seconds.”

Though it is easier to shoot with the tone, the reason for using it is to help improve and learn trigger squeeze and follow-through. Shannon usually shoots 10 shots without the tone, preceded and followed by a 10-shot string with the tone.

The use of the SCATT system makes it possible for Shannon to train during the winter months and during the school year, when it can be hard to get to a range. The system allows her to continue to train at home but with more information than dry-firing alone provides.

Though Shannon does not know exactly where her life will lead, she wants to join the Navy, and right now, academics and shooting help one another.

“I can use the different strategies of math to do calculations for my shooting stuff.”

Her father challenged her to determine how many pieces of brass were in his annealer as well as to calculate how much they shoot and the associated monetary costs. Shannon wanted to find out whether it was cheaper to practice in their current manner or with live ammunition. The answer – roughly 720 dry-fires a month on the SCATT system in addition to ammunition for live-fire matches. When priced in match-grade ammunition, the SCATT system paid for itself in only a few months for the dad and daughter duo.

This fall, Shannon will be part of the STEM (Science, Technology, Engineering and Match) 6 program for sixth graders at Spring Ridge Middle School. The competitive program provides hands-on opportunities for dedicated students with good marks.

In conjunction with STEM, another possible route for Shannon is shooting on a collegiate team. Shannon joined the Arlington Junior Rifle Team in Baltimore, Maryland. The team competes in 10-meter air precision and smallbore rifle.

At her first practice, Shannon admitted she was nervous.

“It’s new people, new rifles, new stuff, but afterwards it was interesting seeing how small the targets were and how good they were shooting on those tiny targets.”

To reach her future plans, Shannon said that “It would be really nice if I got a scholarship, but that’s like FAR in the future.” Right now, her favorite sport is still highpower, and she is taking each day as it comes. She even has plans to shoot vintage rifles.

When her father talked about selling his wood rifles, Shannon broke into tears, telling him not to, because, “I want to shoot them eventually and get medals with them.”

Shannon’s journey is just beginning, and she dives into each new segment with passion and motivation.