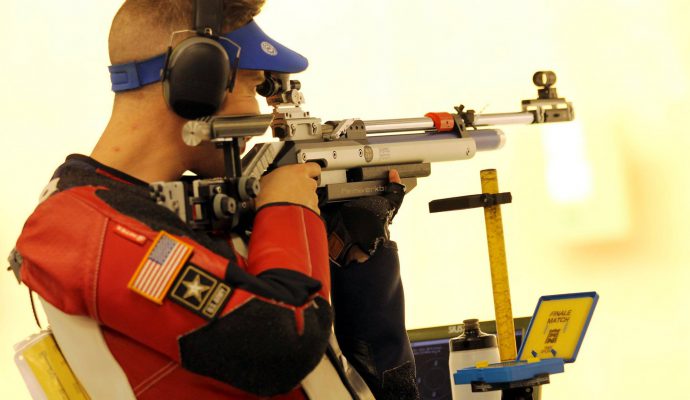 The surprise of the match thus far has to be Miglena Todorova (Miranda, California) earning top honors in Women’s Air Pistol. Todorova is a former competitor for the Bulgarian National Team having last competed for them internationally at the 2006 World Championships. She’s now competing for Team USA and will look to earn USA Shooting an Olympic quota this year as she’s destined for Lima, Peru as a Pan Am Games Team member while also set to compete in the upcoming Beijing and Munich World Cups in preparation for that big match. Todorova joins another former Bulgarian who found much success in the American shooting scene as Emil Milev competed in two Olympic Games for Team USA after starring in three Olympic Games before that with Bulgaria.  She earned her spot behind a top qualifying score of 574 she shot Thursday.

Nathalia Tobar (East Northport, New York), a former competitor for Colombia, will join Todorova on the Pan Am Games Team while Alexis Lagan (Boulder City, Nevada), who previously earned an Olympic Quota spot at last year’s Championship of America’s, will compete with Todorova and Tobar at the World Cups.

Olympians Nick Mowrer (Butte, Montana) and Lucas Kozeniesky (Fairfax, Virginia) earned Pan Am Games spots as well with Mowrer earning his nod in Air Pistol and Kozeniesky set to compete in Air Rifle.  Mowrer earned a World Cup spot also and he’ll be competing alongside James Hall (Columbia, Missouri) at the Pan American Games, while Hunter Battig (Colorado Springs, Colorado) stepped up with a great performance to earn his first World cup opportunity, the only junior thus far to garner such reward. To do so, he had to defeat 2016 Olympian Jay Shi (Phoenix, Arizona) in a two-shot shoot-off as the 17-year-old Battig outshot the veteran Shi, 19.9 to 18.3.  Mowrer will now try and earn selection in a completely different discipline of Three-Position Rifle, where he finished second at the last Selection match.

Kozeniesky was bested for World Cup selection by Tim Sherry (U.S. Army Marksmanship Unit/Highlands Ranch, Colorado), Dempster Christenson (Sioux Falls, South Dakota) and Matt Rawlings (Wharton, Texas). Sherry was on top of his rifle game throughout including a highlight performance score of 630.9 in Wednesday’s Qualification match, a mark five points higher than any other competitor in the field.