You are here: Home / Features / The World’s Most Accurate BB Gun 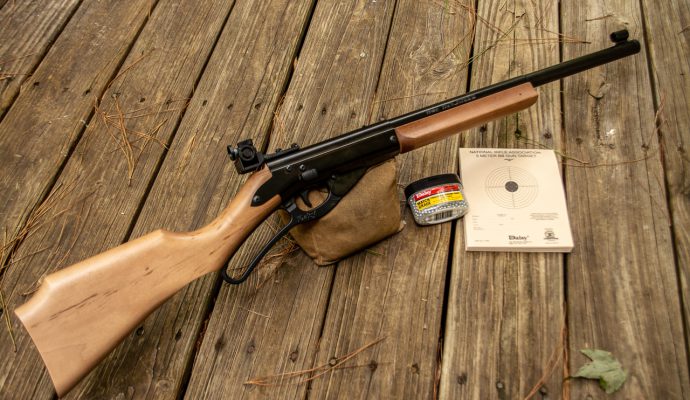 We decided it was high time to take a closer look at the world’s most accurate BB gun – the Daisy 499B. Ready?

First, you’ll notice some high-fallutin’ accouterments like professional aperture sights. The front is a hooded aperture, just like those used on Olympic air rifles. In English, instead of a simple post for the front sight, you’ll see a hollow circle which surrounds the bullseye of the target. When using the official NRA 5 Meter BB Gun Target at 5 meters, that front ring appears a little larger than the black bullseye, so you center the aim point in your view. The rear sight has large dials to adjust the point of impact for windage and elevation – that’s side to side and up and down.

The 499B Champion has a wood buttstock and fore-end. The buttstock has a Monte Carlo shape, so the comb is raised to provide a perfect cheek rest that lines up with the peep sights. While we’re talking about the stock, the fore-end has a hollow section that can be filled with lead shot or even molten lead to provide some extra weight and stability. The serious shooters and coaches will also drill out areas in the buttstock to add some weight there too. As an additional stability aid, Daisy includes a competition sling with the 499B Champion for use in the prone, sitting, and kneeling stages of competitions.

Lawrence Taylor of Daisy describes the bottom line of the 499B this way, “It’s the gun used in the Daisy National BB Gun Championship Match, so it had better be the right gun for top-level, national competition. The 499B is a real competition gun. If you’re shooting 5-meter events, this is the gun you will shoot.”

Step 1: Safety on! The safety is a slide switch on the right side of the receiver. Pull back to engage the safety and push forward to fire mode. It’s intuitive and perfectly positioned to operate with the trigger finger. The position also is the natural and safe place for competitors to rest their finger when not actively shooting.

Step 2: Cock the lever – just like on the standard Daisy Red Ryder and all reputable cowboy guns.

Step 3: Load the BB. It’s a muzzleloader, so all you have to do is tilt the muzzle up and drop one in. Once the BB reaches the breech, it’s held in place until fired. Oh, and the muzzle is a funnel – the opening is about ½-inch in diameter so you won’t have to fumble around getting the BB in there. The professionals use a wooden dowel to seat the BB precisely the same way each time.

Step 5: Safety off when ready!

Shooting a 5.1 grain Daisy Match Grade BB, I measured velocities using a chronograph. Shot to shot consistency was amazing – the first five shots measured within two feet per second of each other. The average speed of those BBs? How about 207.1 feet per second? For those of you energy geeks, that works out to 0.49 foot-pounds. Not exactly ideal for small game but it does a great job against regulation paper targets.

I made a high-tech backstop consisting of a cardboard box filled with junk mail which worked great – with one exception. I wrapped portions of the box with clear plastic packing tape to keep it closed. When a BB would hit that tape, it would often bounce back rather than penetrate. Actually, “bounce back” might be a slight exaggeration. The BB would dribble back towards me and make it about halfway to my position. Don’t worry; I was careful to pick them all up at the end of my session so when my wife returns home she (hopefully) won’t find any stray BBs in the den!

Using the official NRA 5 Meter BB Gun targets, I zeroed this BB bazooka using the rear sight adjustments. Once I did, every shot landed in the ¾-inch bullseye with regularity as long as I did my part. Since we’ve challenged Editor Roy of American Handgunner and Guns Magazines to a blood sport postal match using these fine little rifles, you can bet I’m going to be embarking on a customization journey to get every bit of advantage that I can. Think my spouse will mind if I melt lead in the garage? Stay tuned for more on the upcoming American Airgun Warrior cage match… We plan to humble that fire and brimstone gun guy.