You are here: Home / Features / The World’s Largest Floating Airgun 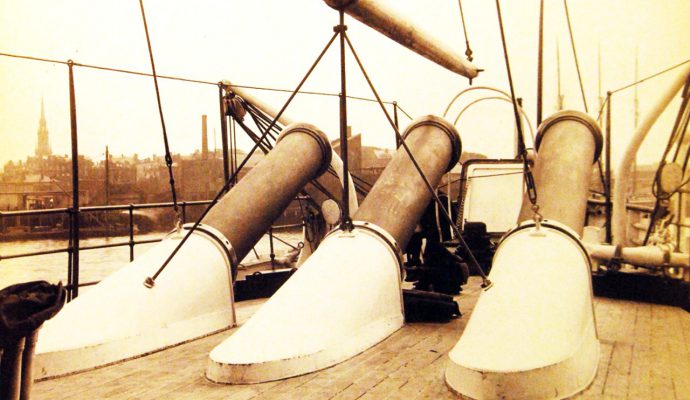 Maybe, like me, you’re impressed with the incredible industry innovations we’ve seen in the big-bore market. PCP rifles (remember, that last “P” stands for “pneumatic,” a fact that’ll become interesting in just a moment) are now becoming common chambered in caliber numbers starting with fours and fives. While a multi-shot, large-caliber airgun was an expensive undertaking in the days of Napoleon and Lewis and Clark, today they’re readily available and much easier on the back when it comes to filling. Innovation and cost reduction seem mighty impressive. Until you look back 135 years. Folks back then knew a thing or two about real big bores.

What if I told you the United States Navy built a three-barrel, 15-inch big bore air rifle and mounted it on a ship? I’ll spare you the admittedly simple math: that’s a 15-caliber rifle. Not .15-caliber, but one 84.74 times larger than the .177-caliber Daisy Red Ryder we all know and love.

One has to wonder, what on earth do you do with a 15-inch bore air rifle? The answer proves that throughout the history of humanity, boys will be boys — because they decided to fling dynamite with it. And how far will a pneumatic air rifle lob a load of dynamite? Anywhere from 200 yards to one and a half miles. It would’ve been great backyard fun if it weren’t permanently mounted on a ship.

But alas, the Navy was in charge and, being biased towards a water-based platform, decided to make the world’s first Dynamite Gun Cruiser. The USS Vesuvius had its keel laid in September 1887 and was commissioned in June 1890. The Vesuvius was a testbed but a legitimate operational one, seeing various service roles until being taken out of service as a Dynamite flinger and undergoing a conversion to a torpedo testing platform.

The USS Vesuvius nearly suffered an embarrassing end, somehow managing to torpedo itself in May 1913. The circular torpedo path sounds hauntingly familiar to that helicopter scene in the movie Goldeneye, but I digress. Quick action by captain and crew, followed by a deliberate grounding, saved the ship.

Made of iron and 55-feet long, the barrels were partially inset into the ship’s structure, meaning no moveable turrets allowed. Like a fighter plane, the ship fired its dynamite payloads in whatever direction it was pointing. As you might guess, the configuration was more suited to land bombardment than ship-to-ship combat, especially since the turning radius of the Vesuvius was something like a country mile. As for its defensive capability while retreating, well… at least the Vesuvius was slow too.

Those three “air rifles” were also fixed in elevation, so the crew adjusted for distance using variable air pressure. This impresses me.

The air reservoir, supplied by two onboard compressors, ran at what we would consider low-pressure today, about 1,000 psi. Nonetheless, the gargantuan airguns could fling their 550-pounds of desensitized dynamite at 800 feet per second.

This odd setup did see action in the Spanish American War when it bombarded Santiago, Cuba. While results were questionable, the bombardment terrified the recipients because they showed up silent and deadly, with none of the traditional naval bombardment warning noises. Reports indicate the payloads made “craters like basements.”

Oh, and why air-powered? Even though the finned dynamite projectiles were filled with a shock-resistant blend of nitrocellulose and nitroglycerin, the safety of air cannoneers and shipmates demanded a kinder and gentler launching system, offering more of a push than a concussion.