You are here: Home / Features / The Sound of Silence 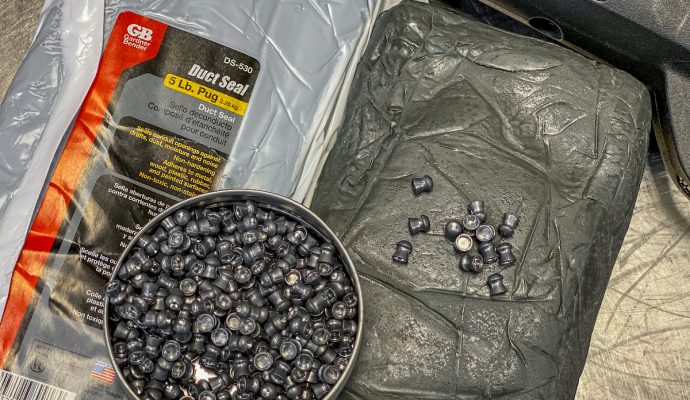 I earn my living writing things down, but I have to admit I struggle with the idea of how to capture the sound of silence via the printed word.

The nifty thing about small-caliber airguns is the relative level of quiet. In the fire and brimstone shooting world, even a .22 LR makes more than trivial noise — about 155 dB. However, a .177 or even .22-caliber airgun only generates noise somewhere in the low to mid-90s range depending on the caliber and model. To compare, you’ll generate 88 dB mixing a margarita with a blender and 107 dB mowing the lawn. Keep in mind decibels are measured on a logarithmic scale, so a small difference in the number can represent orders of magnitude in sound level difference.

The quiet of airguns presents an interesting challenge. While I’ve not (yet) measured results with a decibel meter (those things are expensive, at least the accurate ones), it sure does seem the impact of a pellet hitting the target often makes more noise than the shot itself, at least when firing lower-end calibers like .177, .22 and .even .25. If you’re shooting and air pistol or rifle in the backyard or garage, it might be the target impact noise more than the airgun report scaring the neighbor’s cat.

Duct putty is a handy material to seal leaks around HVAC ductwork joints. Think of it as adult silly putty, although it’s stickier and you’ll want to wash your hands after using it. It doesn’t “stick” per se, but you will feel a bit icky after working it. Also, imagine the love child between lead and Play-Doh. It’s moldable but really, really dense and heavy for its size. If you don’t feel compelled to work on your air conditioning system, you can also use it for a shockingly effective airgun target backstop.

Some hardware stores will carry it. Some won’t. My local Lowe’s and Home Depot stores didn’t have any in stock, so I can only assume our ductwork is perfect around here. So off to Amazon I went where I found two 5-pound blocks for about $23. That amount of material gave me a rectangle about the size of an 8.5 x 11″ sheet of paper with a depth of 2.5 inches, give or take. I could have made do with a shallower fill, but I wanted to shoot .25 caliber too and I wasn’t sure how far it would penetrate.

Here’s the thing. When you shoot targets using a wood or steel trap or backstop, you’re making a lot of noise with each pellet impact. Even my go-to cardboard boxes filled with old newspapers and magazines generate a good “THWACK!” when struck. The putty acts as an impact suppressor while slowing the pellet to a dead stop. Rather than relying on a hard and impenetrable substance to stop the pellet’s travel, the putty slows it down — quickly and quietly.

I fired some .177 pellets from a break action Buckmark (perfect indoor garage shooter) and the head of the pellets barely penetrated the putty. When I moved up to a PCP .22 caliber Gamo Urban 22 rifle, the pellet depth ranged from stopping just when the bottom of the skirt made it past the surface to 1/4″ deep. That left me 2 1/4″ more of safety margin.

If you want to take a belt and suspenders safety approach, use an old frying pan to hold the putty. The metal base will certainly stop any smaller bore pellets that manage to make it through the putty. Or lay a piece of wood in the base of your target box. Your creativity is the limit.

The beauty of this DIY target system is no ricochets and a significantly quieter shooting session. Your neighbor’s cat will thank you. Strike that. Cat’s don’t appreciate anything.