You are here: Home / Accessories / The Revolutionary Hunting Projectile Now in .30 Caliber 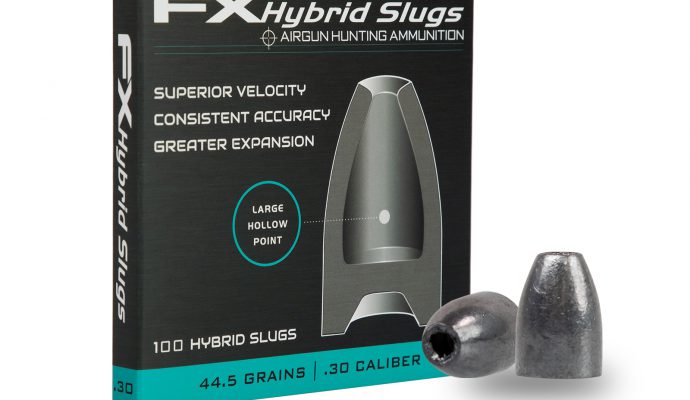 The FX Hybrid Slug has been a fundamental leap forward in airgun projectile design. A projectile shape that combines the high ballistic coefficient of slugs, accuracy of pellets, and a light weight provided by the deep recessed hollow point provided by the Hybrid’s patented design. No FX offers the .30 Caliber Hybrid.

.30 Caliber has always been a fantastic hunting caliber. Providing more knock-down power while also inherently having a higher ballistic coefficient so the projectile could shoot at farther distances while still retaining its power. The .30 Hybrid is no different!

The .30 Cal Hybrid has the length and shape of a slug weighing north of 65 grains, yet thanks to its deep hollowed out core, weighs just 44.5 grains. The result is a fantastic ballistic coefficient at 0.102. This allows for shooters to take game humanely at great distances while still retaining the energy of the projectile. For instance, a 44.5 grain Hybrid shot at 980 fps has 95 ft lbs of muzzle energy. At 100 yards the Hybrid still maintains 67 ft lbs of energy (compared to a similar sized pellet that would only retain 45 ft lbs at 100 yards). This high BC also makes the FX Hybrid less susceptible to wind drift. All things needed to humanely take game at longer distances. At just 44.5 grains, shooters will find that a vast amount of .30 caliber rifles will shoot the hybrid well. Optimal accuracy will be found between 960-1020 fps, but the Hybrid will still shoot well at slower speeds depending on the manufacturers barrel and twist rate.

To better tailor their barrels to shooting both the .30 Hybrid and standard .30 Cal pellets, FX Airguns has further advanced and adjusted the specification of their .30 Caliber Superior Standard STX liner. All .30 caliber rifles now being produced by FX Airguns will come with a Super Standard STX liner features a 1:26 twist rate. This liner will shoot both standard .30 Caliber pellets and .30 Cal FX Hybrid Slugs exceptionally well (as well as other light weight .30 Cal slugs).

The .30 Caliber FX Hybrid Slug is available immediately at all USA based FX Dealers and will be available shortly at worldwide FX Dealers.

Contact your local FX Dealer for pricing and availability.