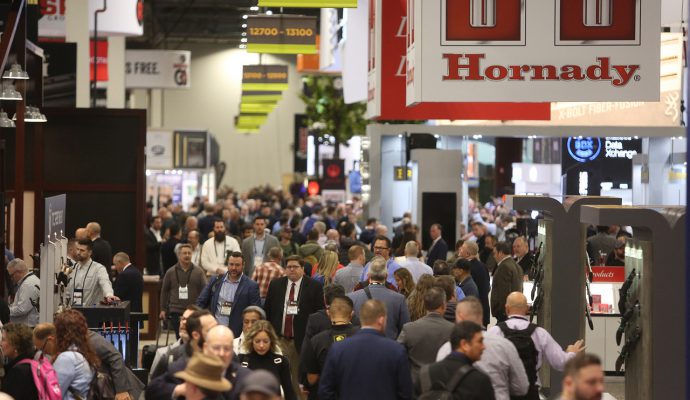 We’re on the eve of the weirdest Shooting, Hunting and Outdoors Trade Show ever, but I’m more optimistic than ever about the show’s real benefit.

Last year, thanks to COVID-19, the SHOT Show was canceled outright. Understandable, yet still shocking because this event is the premier gathering for manufacturers, distributors, retailers, law enforcement buyers, and media every year. Canceling SHOT is like canceling high school.

With thousands of exhibitors and 14 miles of booth aisles, calling it “huge” is something of an understatement. The NSSF says the floor space last time around was large enough to park 547 F-16 fighter jets. They’ve added a whole new exhibit hall and outdoor section this year. I’ll see if I can pace it all off to find out how many F-22s will fit.

Typically, the SHOT Show draws over 55,000 attendees over its three days indoors and extra range day out at the Boulder City Rifle & Pistol Club. That’s great for the National Shooting Sports Foundation and all those companies investing big dollars in time, talent, and gear, but tough on us media folks.

When the aisles are packed, you can’t help but shuffle at a pace slower than those crawler-transporters NASA used to drag Saturn V rockets to the pad. A dad joke that never gets old is to moan, “mooooo…” in a loud voice. That never fails to get knowing smiles from those stuck in pedestrian traffic with you. Every few minutes, when you did manage to reach the next booth, you’d find it walled off with mesmerized SHOT attendees. Seeing what’s inside, much less initiating a conversation, is always an exercise in tenacity. So, you miss things. A lot of things.

And therein lies the opportunity for 2022.

While “logic” might indicate trade shows are no longer relevant because you can find stuff on the internet, to me, there are some very tangible benefits to an in-person event like SHOT.

Yes, I can find most anything I need on the web, but I have to look for it. To search, I have to know precisely what I’m looking for. The beauty of the trade show is wandering the aisles, not knowing what you’ll find in the next booth.

I can’t tell you how many new products and companies I’ve discovered this way. I would never have found their stuff on the internet because I didn’t know it existed.

This year, COVID will have a significant dampening effect on attendance. Many large companies have already backed out of the show, even at this late date. While that will hurt the NSSF, there will at least be a silver lining for media and lots of smaller companies. All indications are that the smaller and newer vendors are planning to show up in force.

That’s great news because we’re going to have time and opportunity to talk.

So that’s what I’m looking forward to. As I write this, none of the airgunning companies have yet backed out of the show, so all planned meetings are still on. Based on the incoming news so far and rumors of what’s to come next week, I expect a lot of exciting announcements in the airgun world.

Stay tuned, and we’ll bring you the latest as we get it.