You are here: Home / Features / The Fullback of Airguns? A Look at the FX Wildcat Mk II Air Rifle 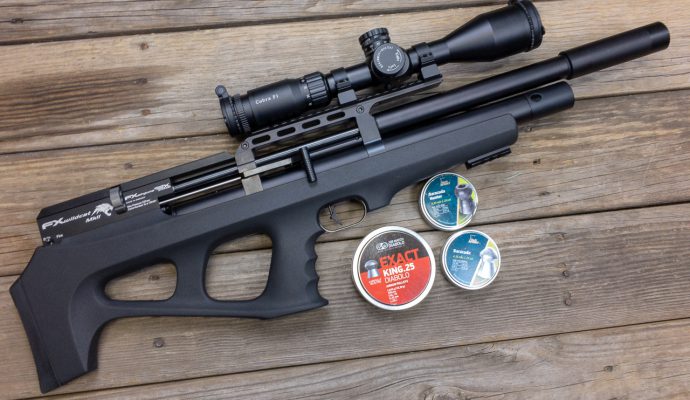 Years ago, I used to love watching Mike Alstott (adoring fans called him the A-Train) play fullback for the Tampa Bay Bucs. A classic bruiser, he appeared to be about half the height and twice the width of other players on the field. He actually measured in at 6’1″, so call it an optical illusion resulting from his classic fireplug build. The guy was strong, and stunningly fast for his bulk. That combination worked for him as he earned six Pro Bowl trips and a Super Bowl Ring.

I’ve been noting some similarities with a new FX Airguns Wildcat Mk II air rifle. This PCP is short and stocky, but I mean that in a loving and caring way. As a .25 caliber, it’s also powerful. You might think of it as the fullback of the airgun world.

At just 31 inches long, the FX Wildcat Mk II Air Rifle performs like a handful but balances its weight effortlessly as the center of gravity is close to the body. It’s a true bullpup configuration with the rotary magazine placed much closer to the butt stock than the trigger area. That allows the Wildcat to house a 21-inch barrel and five-inch removable shroud in that less-than-a-yard overall length.

This rifle is slick. The side-lever bolt operation is effortless. As the bolt handle extends to its most rearward position, it advances the eight-round magazine to the next chamber. The magazine operates like a ratchet. The whole thing moves in its well so there are no funky internal magazine springs or tricky loading processes. Just drop pellets in the holes and snap the mag into place. Two spring-loaded ball bearings hold it in position and allow it to rotate on command.

The trigger is beautiful and adjustable for nearly everything. You can move the trigger face up and down. You can move the trigger back and forth to fine tune the length of pull. You can adjust the travel for the first stage of the trigger press. And you can adjust the weight of the second stage and break. From the factory, the trigger on this particular Wildcat Mk II measured… Well, I don’t know what it measured because it was somewhere less than the eight-ounce starting graduation on my trigger weight scale. Time to go digital on that particular tool I suppose. Let’s just go with a trigger sensation and weight description of “superb.”

The fill port uses a probe system. I’m not a fan of probes in general but this one has been working with no trouble. A manometer on the end of the air cylinder shows your remaining pressure. I’ve been filling the FX with the (relatively) new Benjamin Traveler portable compressor. It’s quick and easy and you can run this Mighty Mouse from household current or from a 12V car, boat, or ATV battery. When the Wildcat had a reservoir pressure of about 140 BAR (2,030 psi) I topped it off to its maximum capacity of 230 BAR (3,336 psi) in about 4 1/2 minutes using the Traveler.

If you promise not to tell the folks at FX that I’ve been using this premium air rifle for mundane tasks I’ll let you know that it does an excellent job of pruning tree branches too high to reach. Those .25 caliber heavy pellets are the bomb for cutting pine branches. You’re welcome for that home gardening tip…

On a more serious note I spent some time at the range with the FX Wildcat MK II using three different .25 caliber pellets. Since it’s magazine fed, you do have to stick to standard pellets. The heavy ones like the Barracuda 30.86-grainers can be a hair long and cause the magazine to pop out when advancing to the next pellet. That’s because either the head or skirt of the pellet might extend ever-so-slightly out of the front or back of the rotary magazine and interfere with its ability to rotate freely. All three of the pellets tested worked, but I had to use a bit more care when cycling those heavy H&N Barracudas – they were right on the fence.

After chronographing all three pellet types I set up targets at 24 yards. The day was nice but a bit breezy with 6 to 8 mile per hour gusts coming from the 10 o’clock direction. As long as I waited for the still air pauses things worked out just fine and most every group formed as one ragged hole. Here are the velocities and average five-shot group sizes from 25 yards.

With such nifty results at 25 yards I decided to shoot a few at 50 yards, wind or not. Since the JSB Exact Kings were the most accurate at 25 yards, I used those. At 50 yards, I measured a group size of 0.62 inches. I figured that was pretty spiffy, especially considering the wind conditions.

There’s another interesting feature of the Wildcat Mk II rifle. It’s got an interchangeable barrel liner system. That allows you to replace the standard barrel with the FX Smooth Twist X Barrel. You can order the “X” version in different twist rates to match the barrel to your preferred pellet type and weight.

This is one seriously fine rifle. I want it.