You are here: Home / Airguns / The Benjamin Pioneer Airbow: When You Absolutely, Positively Have to Shoot an Arrow Through a Tree 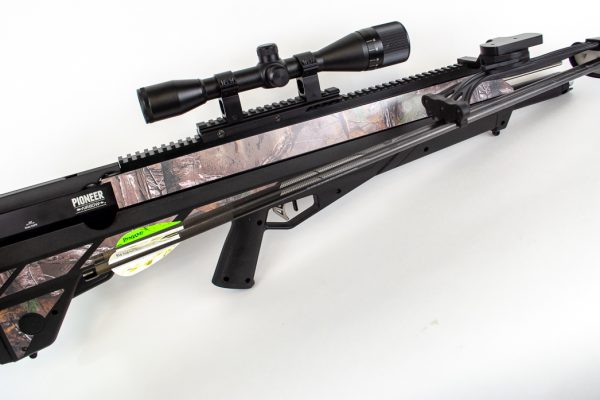 Imagine a sound exactly halfway between a resounding “thunk” and an authoritative  “whack” – kind of like that of a White Ash Louisville Slugger meeting horsehide at the Home Run Derby. That’s the sound of a Benjamin Pioneer Airbow arrow striking (and impaling) a ¾-inch sheet of sturdy plywood.

Why would we do that? In our defense, it was the culmination of a string of “testing” activities with the Airbow. OK, so it was more fun than rigorous science. Don’t judge me. It’s my job, not just an adventure.

What the heck is an Airbow? Imagine a rifle that fires 375-grain bullets, but quietly. Imagine a crossbow with no lateral bulk. Imagine an airgun that shoots two-foot-long pellets. Getting a mental picture? Then you’re getting close to understanding what the Pioneer Airbow is. The Pioneer Airbow ready for business.

Simply put, it’s an air rifle with an inside-out barrel. Rather than a rifle with a barrel through which projectiles are launched, it’s a tube over which you slide projectiles that are subsequently pushed by compressed air. Those projectiles are arrows – special arrows. They’re hollowed out so that they can slide over the launching tube. They’re also coated with some magic ceramic material to make it easier to extract from targets and so they can fly with reduced friction. As we found out, that’s an important feature when you’re launching bolts into targets and backstops at Warp Factor 19.

Before we get into the “what this thing is” part, we ought to address the “why” part of the equation. The Airbow can be used in many states during airgun season and by disabled hunters in some states during bow season. That’s a big plus on its own. However, as it has a “rifle” form factor, the Pioneer Airbow is a lot easier to lug through the woods. It’s more slender than a compound bow and way slimmer in the hips than a crossbow. It’s also a bullpup design with much of the action in the stock area, so the overall length is compact. Oh, and it delivers more zing than just about anything with strings. Last, but not least, the design of the Airbow and its hollow-core arrows means that they are pushed from the inside of the tip rather than from behind the feathers. This leads to less arrow flexing and improved accuracy. Combine velocity and accuracy and your effective bow range has just increased. The comb of the stock doubles as the cocking lever, so it’s ambidextrous.

You cock the Pioneer Airbow by lifting a lever that makes up the top (comb) of the stock. That placement means that it’s fully ambidextrous. The mechanism is designed in such a way that you can safely de-cock the Airbow as well. That’s important for you tree stand huggers. While up there in the leaves you can de-cock the Airbow before lowering it to the ground. Safety first! The safety is also ambidextrous as it’s located inside the trigger guard like those on many other more traditional airguns.

So, the Airbow looks kind of like a space-age air rifle from the movie Starship Troopers. It features a scope mount and includes a 6×40 optic optimized for the included arrows. Once the scope is zeroed, you rely on the reticle for correct holdover at different distances. The reticle marks give you specific hold points ranging from 24 to 73 yards with the primary crosshair intersection representing 30 yards.

The “quiver” holds three arrows and mounts on either side of the Airbow.

Under the “barrel,” or more accurately speaking, launching tube, is an air cylinder that packs 3,000 psi of compressed air. You can monitor the onboard pressure with the manometer mounted on the front of the air reservoir. Because I was feeling manly and wanted to test the “Pioneer” part of the Airbow’s name, I did the initial fill using a hand pump. Hey, pioneers didn’t have electric air compressors, now did they? Anyway, when the Airbow arrived, it had very little pressure in the tank, so I was effectively starting from zero pounds per square inch. It took me a solid 300 pumps to fill the beast. In practice, you’ll want to top off the onboard air reservoir when it dips to the 2,000 psi level give or take. That will require about 100 pumps. Of course, if you’re going to use this a lot, get yourself an air cylinder or a portable air compressor like the new Benjamin Traveler. The manometer (pressure gauge) is on the front of the air reservoir to monitor filling and status while shooting.

One of the Airbow’s claims to fame is raw, unadulterated power, so I decided to test that first. Being super smart, I figured that I would shoot some arrows through my chronograph and into the large dirt berm at my gun club so I wouldn’t lose them. That plan turned out to be super dumb. I got great velocity readings that averaged a whopping 468.5 feet per second. The super dumb part of my plan was letting the berm “catch” the arrows. They were zooming along so fast that they buried themselves to the hilt in the dirt – I never did find one of them and it probably now resides 300 feet under eastern Georgia. That was my just reward for being too lazy to line up the chronograph with an archery block. While I was testing velocity, I found that the Airbow will crank out eight to ten decent shots before you’ll want to top off the air reservoir. This was one of my “fortunate” stops in the berm while velocity testing. One arrow buried itself so deep I never did find it.

Accuracy testing also turned out to be a bit of a challenge. The included archery scope was excellent, and the included “rough zeroing” instructions got me pretty darn close at 30 yards, so the difficulty had nothing to do with the Airbow, its ammo, or optics. The problem was in my ability to measure the groups. I used a target block, dutifully turned oblong for crossbow (higher velocity) use. My plan seemed straightforward and logical enough: shoot three arrows and measure their distance from each other. What blew that idea out of the water was that the arrows mostly zipped straight through the block – there was nothing protruding from the front of the target that I could measure. Not wanting to be bested by the power of the Airbow, I stapled a sheet of paper on the front of the target block so I would at least be able to see the entry holes and measure those. Success! Group size from 25 yards averaged 1.5 inches. To be fair, I have to mention that by the time I got to accuracy testing, my arrows were, well, let’s just say “well worn.” Remember my velocity testing adventures? That, plus the arrows passing all the way through the target block did a job on the feathers, so they weren’t exactly in pristine condition by the time I was able to measure groups. I suspect you could improve on my 1.5-inch average group size with new arrows. Even still, I was pretty darn impressed with the results. Even with well-worn feathers, the Airbow easily shot 1.5-inch groups from 25 yards. Those are actually three holes – two arrows went through the same spot.

Out of the box, the Pioneer Airbow comes in basic black. However, Benjamin includes a full set of Realtree decals so you can deck yours out like the test model shown here. We recommend doing that as all the cool kids will be sporting camo. Just in case you’re wondering, the Airbow will penetrate 3/4-inch plywood with ease along with a supporting 2×4.

Here’s the bottom line. This thing is fun. I can’t quite figure out what I like so much about it. Maybe it’s the “unusual” factor. Perhaps it has something to do with its resemblance to a 50 BMG bow. Whatever the reason, everyone I recruited to shoot this thing was simply giddy after their first launch. Oh, and that plywood thing? Having a well-worn and damaged arrow, I got curious and recruited my nephew to fire it at the target stand backed by ¾-inch plywood and supported by a 2×4. As you can see by the photo, penetration was aggressive to say the least. I certainly can’t complain about the power…