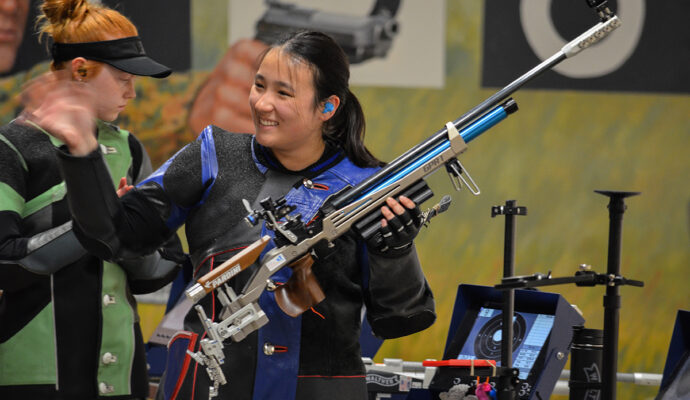 Those in attendance at the 2022 National Three-Position Precision Championships might have been feeling some déjà vu.

At last year’s event, which was held in two different locations to accommodate COVID restrictions, Texas Hill Country Shooters set a new Team 3×20 national record score in the Junior Olympic (JO) match. Texas Hill returned in 2022 to not only fire a new Team 3×20 national record in the JO event but also turned around to break and set a new record in the CMP competition the next day – reaching an overall score of 2379-200X. Team members included Elizabeth Probst, Braden Peiser, Camryn Camp and Briley Sralla.

Individual winners were chosen each day through a three-position elimination final, where the top eight qualifying athletes started from a score of 0.0 and fired shots at prone, kneeling and standing positions to accumulate aggregate scores. Lowest scores were eliminated from the final until only one remained. Overall winning teams were also determined from four-person qualifying aggregates from each day’s scores.

“This event brings out the best junior air rifle shooters, and this year was no exception,” said Katie Harrington, CMP program coordinator and match director for the National Three-Position Championships. “The scores this year were very impressive. We had over 25 individuals fire in the 590s each day, and we got to watch some very exciting finals. It was great to have all the competitors back firing shoulder-to-shoulder this year.”

Like Texas Hill, Emme Walrath, 16, of Grand Rapids Rifle & Pistol Club, and Katie Zaun, 19, of Buffalo Sharpshooters, gave spectators a thrilling show reminiscent of last year’s JO match – when the two battled out a tough finals performance side-by-side. Just as last year, Walrath and Zaun were the last competitors on the line during this year’s JO match, with Walrath again earning the overall win. Walrath went on to claim this year’s CMP national title – again, just as she did last year.

“Coming into the match, I was just kind of thinking, ‘Okay, it’s another year – we can do this. We can definitely keep it up this year,’” she explained.

Last year’s Nationals was her very first experience in shooting finals. Now more familiar with the process, she went into this year’s competition with a simple yet encouraging view to lead her once (or twice) again to overall wins.

“Even if I don’t win, that’s okay,” Walrath said. “I’ve learned how to control my reactions to stress – my heart beating. I know it’s there, but that’s normal. It’s coming to terms with, ‘Yes, I’m shooting a final.’”

“I feel like finals are a lot more fun for me,” she added. “They’re a lot more stressful, yeah, but the stress part adds more fun to it.”

“Every year is a huge joy to see everyone,” Walrath said of competing at the national level. “It’s a very cool feeling that you get to shoot alongside people that you know, and even if you don’t get [the win], you can still cheer on as loud as possible for your friends. I find that very rewarding.”

Other leading teams of the events behind Texas Hill were Central Illinois Precision Shooting, who earned second in both the JO and CMP competitions, as well as Acorns Green (Virginia) and Oil City Jr. Rifle Team (Pennsylvania), who landed in third place in the JO and CMP matches, respectively.

As part of the continued support of youth athletes, the CMP also awarded $1,000 scholarships to the top three leading graduated seniors. This year’s recipients were Emma Pereira of Virginia and Julianna Hays of Minnesota, who will both be joining the Ole Miss rifle team in the fall, as well as Mikole Hogan of Texas, who is set to become a member of the Texas Christian University rifle team.

For a complete list of results, visit the CMP’s Competition Tracker page at https://ct.thecmp.org/2022N3PARCresults. Photos of the event are available online at https://cmp1.zenfolio.com/f65061194.