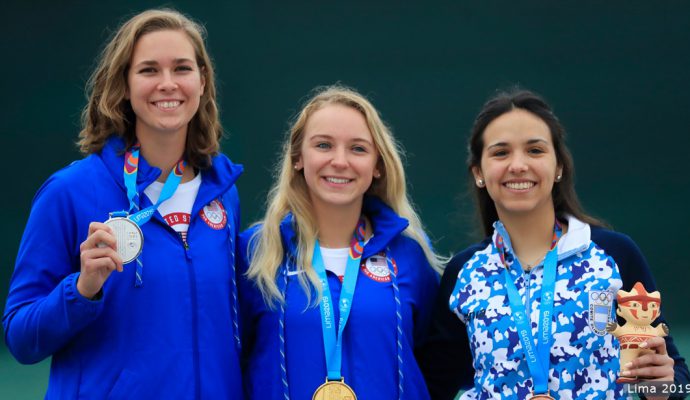 Ali Weisz won not only a Pan American Games Lima 2019 gold medal, but also the final quota spot for the U.S. women’s 10-meter air rifle for the Olympic Games Tokyo 2020.

Next to her on the podium was fellow American Mindy Miles who finished second. Miles had previously earned the first quota spot in 2018.

“It’s awesome to see a familiar face and really enjoy that experience together and have someone that can share the memories,” Miles said of having the U.S. go one-two on the podium.

“It’s incredible to know that you’re up there with somebody else that represents our flag and our country,” Weisz said. “It’s reassuring knowing that regardless of what happens on my end, we still have another American out there. It’s incredible to represent the USA any time we’re going anywhere – World Cups, but especially here in this community that we have built.”

After a rough qualification match, Weisz appreciated the fresh start going into the final and knowing that the entire field was reset to zero.

The Las Palmas Air Base crowd greeted the athletes with roaring cheers as competition began.

Even with the quota spot on the line, the main goal for Weisz was to go out and take good shots and focus on what was in her control on the range.

Weisz (Belgrade, Montana) went back and forth with Argentina’s Fernanda Maria Russo Romero for the lead with Miles (Weatherford, Texas) steadily holding the third position. After the 17th shot, Weisz was tied for first with Russo Romero. Shooting a nearly perfect shot with a score of 10.8, Weisz edged ahead with a marginal lead of 0.6.

For the 22nd shot, Miles shot 10.2 to overtake second. By the next shot, the Americans had sealed the Tokyo 2020 quota spot with Argentina getting third.

By the conclusion of the event, Weisz shot a Pan American record of 249.4.

Weisz felt sheer glee about her victory and a sense of relief over having the quota spot already secured going into the rest of the quad year.

“Big weight off my shoulders,” Weisz said about earning the quota spot. “We had two of us here in this event, and Mindy had already earned our first quota, so she was unable to, so it was kind of a lot of pressure riding on me. It’s one of those things that you really have to focus on the process, what you know how to do and the job at hand. All you can control is that.”

Although the Finals performance for Miles was a little rough per her standards, she accomplished her mission: helping her teammate achieve her goal.  However, she did earn the top Qualification mark for the day of 627.

“I already had my quota spot,” Miles said. “I came in really just defending my teammate. I was trying to get her up – if she could do her best and I could follow up, I can secure that and help her with that.”

In Men’s Rapid Fire Pistol, U.S. athletes Keith Sanderson (Colorado Springs, Colorado) and Jack Leverett III (Bainbridge, Georgia) finished fourth and fifth after making the Final.  The three-time Olympian Sanderson was the top qualifier by three four points with a top-notch score of 586 while Leverett was fifth with a score of 578.  Sanderson and Leverett were seeking an Olympic Quota in the event, but that quest will now shift to the last opportunity to do so at World Cup Rio de Janeiro later this month.

Women’s Skeet got underway Thursday as well and as expected, six-time Olympic medalist Kim Rhode (El Monte, California) and Dania Vizzi (Odessa, Florida) are on top of leaderboard after they each shot 73/75. There will be 50 more targets in Qualification Friday followed by the Final.  Team USA has already previously fulfilled Olympic Quota requirements in this event.

Also taking place Friday, will be action in Men’s Air Rifle with Tim Sherry (USAMU/Highlands Ranch, Colorado) coming back to the line after earning an Olympic quota and Pan Am Gold earlier this week in Three-Position Rifle.  He’ll be joined by 2016 Olympian and National Champion Lucas Kozeniesky (Fairfax, Virginia) as they try to obtain more medals for Team USA and an Olympic quota in the event.