You are here: Home / Competition / Support USA Shooting: The Rise of an NTC Generation 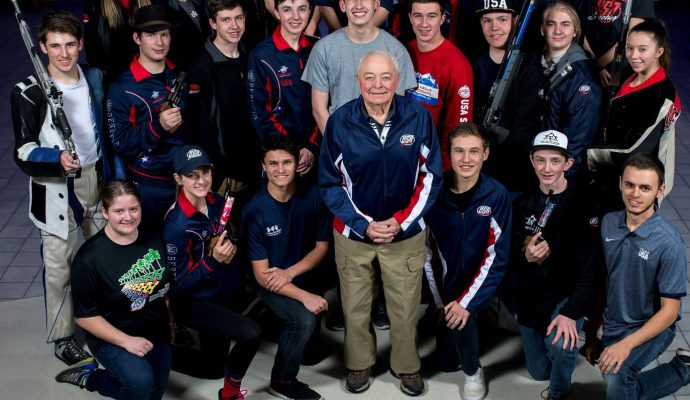 How can donors like you make a difference with America’s Shooting Team? Money raised goes back into strengthening grassroots programs like the National Training Center (NTC) Junior Club, and doing so could save the future of the shooting sports.  Please read this profile and consider contributing a year-end gift that allows us the opportunity to impact youth shooting programs across the country.

The above is the motto that plays out often among club members of the National Training Center (NTC) Junior Club.  As evidenced by the match strength they routinely display at USA Shooting competition throughout the nation along with the mix of dedicated training, supportive parents, coaching and great kids is paying off in an abundance of riches of late.

Mired in the hallowed world-class shooting range on location at the U.S. Olympic Training Center in Colorado Springs, is this USA Shooting rising gem. There prominence as a club has never been higher in its 34-year existence.

The program was the vision of Jim Shaver and Charlie Reed with Bud Kucera serving an important lynchpin for the group all along as well. The club has grown from 27 kids in 2007 to nearly 90 kids now.

“This club has a certain power to it,” said Amber Andreozzi, the mother of Ruby Gomes, who now competes for Kentucky as well. “It’s a magic mix of inspiration and motivation. The kids put their whole hearts into the sport and it shows both in their dedication and their success. Each contributes to the magic of this place and I’m glad my family got to know them all and be part of such an amazing group of junior athletes and coaches.”

The program’s monumental rise ultimately began in 2014, coincidentally right around the same time electronic targets were installed at USA Shooting headquarters thanks to donations made by USA Shooting’s generous donors. That year, club member Abby Votava was crowned a Junior Olympic Champion in Air Rifle and top national results have poured in ever since.

The following year, pistol shooter Carson Saabye became the youngest athlete ever to earn USA Shooting National Team status after she earned a bronze medal at the National Championships. Will Anti, now a senior at West Virginia University, followed with a Junior Olympic title in Air Rifle that same year. Will Shaner, now a freshman at Kentucky,has made it five straight podium appearances at the National Junior Olympics.  Currently, nine club members are competing in eight different NCAA Rifle programs with two additional athletes representing their country in another way as well as part of the U.S. Army Marksmanship Unit.  Another seven rifle athletes committed to compete for NCAA programs next Fall including Mary Tucker and Emmie Sellers bound to join Shaner and another former club member Hailee Sigmon at reigning National Champion Kentucky. Macey Way is headed to the University of Nebraska while John Peterson will shoot for North Carolina State University.  Jordan Williams and Travis Stockton have signed to shoot for the U.S. Air Force Academy, while Julia Flake will soon announce her school of choice.

After strong Winter Airgun Championship performances, both Tucker and Shaner are set to represent USA Shooting at World Cup India to begin the International Shooting Sports Federation schedule in 2019.

The club employs a team-first philosophy and a personal best is always the score to beat. Among a survey of club leadership, parents and athletes, there’s one constant in understanding how the club is earning its recent level of achievement and it centers around coaching.

“Lots of credit goes to a larger cadre of experienced and dedicated coaches,” Shaver says. “A couple of years ago, a great group of coaches came out of several Level 1 coaching schools held here at the OTC. Not only more coaches on the line helped, but that combined with new approaches to training structure, more emphasis on competitive shooting, a great group of very supportive parents and kids who make shooting their sport, and it all just snowballed.”

As the coaching and competitiveness of the club has improved, so too has its attractiveness to youth shooters across the nation. The draw of both potential and competition is a powerful elixir and the club now is obtaining kids across the country.  Families are now uprooting their households for the opportunity to train side-by-side with some of the best junior shooters in the country.

“The club creates a nurturing atmosphere that allows kids to thrive,” add club parent Bill Vogrin. “They put no pressure on the kids to be perfect. Instead, the kids are taught the fundamentals and shown the proper techniques and then allowed to develop at their own pace with coaches who naturally fit their personalities. They also encourage healthy parental involvement and provide support when necessary. If our son never becomes an elite shooter, he still has benefited a great deal from joining the club and learning the discipline and focus required in shooting.”

Make Your DONATION Today to help programs just like the NTC Junior Club achieve greatness in the shooting sports.