You are here: Home / Airguns / A Sneak Peak at New Airguns from Sig Sauer 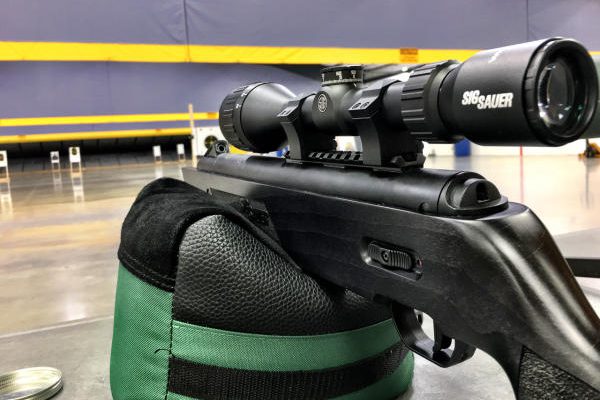 Last week we endured modern air travel and hit the road to Exeter, New Hampshire to check out Sig Sauer’s U.S. headquarters – the home of the company’s air gun manufacturing. That’s now branded as SIG Air and no longer the Sig Sauer ASP (Advanced Sport Pellet) Division. The idea is to support the company’s product strategy of disrupting the air market in many different arenas, not just in the sporting and competition fields. For example, the new M17 Air Pistol plants a flag firmly in the serious training market space.

The primary reason for the visit was to get a first-hand look at the production process and intricate design details of the forthcoming Sig Sauer ASP20 Break-Barrel Air Rifle. Here’s a hint. It’s a beauty. Full of patent-pending innovations that make it blur the line between centerfire and air-powered rifles, this one is no big box special. While it’ll sell for $400 give or take depending on the model and features, it feels much more like a four-figure gun.

We had the opportunity to shoot both .177 and .22-caliber versions of the ASP20, both equipped with beautiful wood stocks. A couple of things quickly became apparent. Both rifles are exceptionally easy to cock as a result of the innovative cocking lever shoe design. The other quick learning was that the rifles are accurate. Very accurate.

There’s too much to talk about with the ASP20, so we’ll cover that separately as soon as an early production sample arrives. For now, let’s talk pistols. While there, we had the opportunity to check out and test fire the new M17 Air Pistol. It’ll be on the shelves this fall, but we’re going to take a quick sneak peek at some of the features that make it so interesting.

It’s a replica of the U.S. Military’s new sidearm, the M17 pistol which is based on the P320 design. True to form in size, feel, and appearance, the only easily discernible difference is that it shoots .177-caliber pellets instead of 9mm bullets. The gas-powered M17 sports the same flat dark earth finish as its louder cousin. The appearance is stunningly cool, but that’s just my opinion.

The M17 features full blowback operation, so you get a taste of recoil with every shot. Like the We the People 1911 air pistol, it field strips all the way down to a removable barrel. Want to go on a cleaning binge or remove a stuck pellet? No problem. It takes just seconds to disassemble.

The trigger press is longer and more substantial than you might expect, but there’s a functional reason for that. Since the M17 fires directly from the rotary magazine belt, the trigger press advances the belt to the next position before the shot breaks. It’s a minor difference from the trigger feel of the original. Other than that, it’s a great training substitute for the centerfire version.

The M17 is a CO2 pistol that’ll get a good 75 shots. On a warm day, you can likely get over 100 due to the temperature peculiarities of CO2 operation. The pellet magazine holds 20 pellets and inserts separately into the removable magazine container that also houses the CO2. So, the “magazine” that contains the CO2 cylinder also contains a magazine for pellets. The CO2 portion of the magazine features a captive valve, so you can drop it to reload without losing any air. That’s a necessary (and realistic) feature when a CO2 cylinder will fire four mags full of pellets. A cam lever locks the CO2 cylinder firmly into place, so you don’t have to worry about losing an Allen wrench tool.

As for shooting performance, wow! We shot freehand, so I can’t speak to “bench” accuracy results, but from 7 to 10 yards it was easy to produce a ragged 20-shot hole. Based on what I saw this pistol should easily produce groups of less than one-inch from 10 yards.

We’re excited about this one and will cover it in full detail as soon as the early production models are available later this year. Stay tuned.