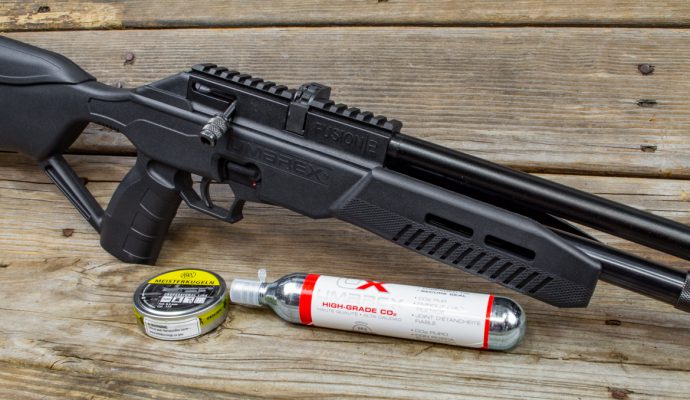 While we can’t say we’ve found a cure for Coronavirus, we’ve discovered an effective therapy for the newfound hermitry mandatory quarantine has inflicted upon us. After sorting the pencils in my desk’s lap drawer by length and sharpness, counting the individual pixels on my laptop screen, and co-authoring a rock opera with my dog, I was ready to find a more active form of amusement.

Enter the new Umarex Fusion 2 CO2 air rifle. Yes, you read that right. CO2. While not unheard of, CO2-powered rifles aren’t quite as popular as N95 masks or toilet paper, but they’re catching on. A quick look at the Fusion 2 will tell you exactly why.

Here’s the reason you haven’t seen the shelves spilling forth with CO2 rifles until now. A standard 12-gram CO2 cylinder packs enough gas to adequately drive BBs and .177 pellets from a revolver or pistol. Depending on make and model, you’ll get 30 or so shots of 300 to 500 feet per second performance. That’s cool for a BB or pellet pistol, but hardly inspiring for a rifle. Those 12-gram tank-lets just don’t pack enough mojo to make an air rifle, well, an air rifle.

Some rifles have been designed to use the larger 88-gram CO2 cylinders. Those are great as they pack a lot more air but they can be expensive and hard to find. More recently, we’re seeing designs that use multiple 12-gram cylinders to derive a similar result — more air power.

The Umarex Fusion 2 offers both. Using a creative adapter that holds two 12-gram cylinders butt-to-butt, you can fire away with those, or by unscrewing the whole adapter, just install a single 88-gram power source instead. Brilliant.

If you use two standard cylinders, you’ll get about 70 shots before needing to refill. If you load up with the big boy, you’ll get a whopping 250, give or take. I went straight to that approach for some testing fun.

The 9-pellet magazine is simple, simple, simple to use. None of those load one, turn the cover 267 degrees while facing Northwest and standing on one foot. Just drop in a pellet, advance the dial, drop in another, and repeat until all 9 holes are full. Not only was it easy to load, it ran and fed like a champ too.

The bolt cocks the action and drives the next pellet into the chamber. After disengaging the safety lever located just above and forward of the trigger guard area, you’re ready to go. By the way, the safety stays where you put it and does not reset after every shot. I appreciate that.

The trigger is nice for an affordable backyard plinker like this. I measured it at just a hair over three pounds and it was surprisingly smooth. That means this handy little plinker is easy to shoot accurately.

I was curious about velocity so I broke out the FX Airguns Pocket Chronograph. This tiny radar-driven unit can hang on the muzzle while you shoot, sending velocity data to its companion smartphone app all the while. My average velocity using the RWS Meisterkugeln 8.2-grain Professional Match Pellets was 710 feet per second. Yes, from a CO2 gun.

I set up targets 15 yards away and shot some five-shot groups using the roof of a 2003 Toyota Avalon as a stable rest. Don’t tell my wife. Anyway, the Fusion 2 printed lots of one-hole groups, at least as shown by the Birchwood Casey Big Burst targets I was using. When I made a closer inspection and looked at the holes, the five-shot groups were less than dime-sized. I measured one at just 0.29 inches. Not too shabby!

I started these notes talking about a quarantine blues cure, and I haven’t forgotten that. Sure, since we’re talking about a .177-caliber CO2 rifle, the ballistics make it backyard and garage friendly provided you shoot safe, wear eye protection, and don’t do dumb things.

That’s all good and nice, but here’s the kicker regarding the Umarex Fusion 2. You’ll notice a triangular muzzle device up near the not-fiery end. Inside are a series of suppressor baffles. The combination of moderate power level and built-in noise suppression makes this little rifle one of the quietest I’ve shot. That means you can concoct all manner of shooting games in the yard to keep you occupied while confined to your home. Those tyrannical weenies who run your neighborhood association will be none the wiser. Now that’s a benefit I can appreciate.