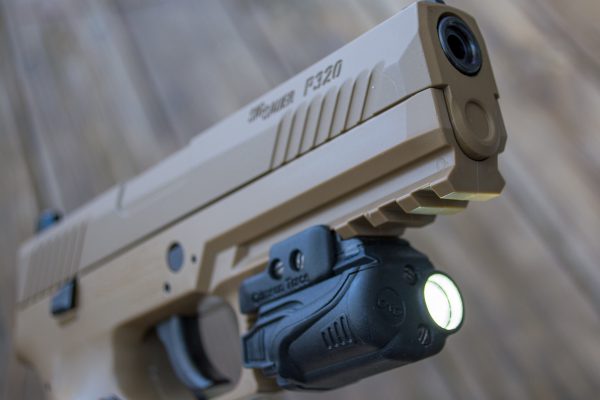 I happen to have a Sig Sauer P320 of the significantly louder variety. It’s louder because it’s chambered in .357 Sig. If you’re not familiar with that caliber, think of a 9mm juiced up on steroids and Red Bull. I love the ergonomics of the pistol, primarily the rounded grip profile compared to the Glock and the more vertical grip angle. It’s also more accurate than same-caliber P226, and P229 models and the trigger is pretty darn sweet for a factory gun.

There is one problem. People in my household tend to frown upon the idea of me practicing at home with live ammo. Apparently, the deafening noise isn’t the only issue; those .357 Sig rounds are tough on the furniture. Yeah, I know, that’s kind of unreasonable, but I like to be considerate when I can. The Sig Sauer P320 ASP air pistol is a CO2-powered .117 caliber pellet pistol. It’ll also shoot BBs if you like.

Guaranteed to be far more residence friendly than it’s centerfire counterpart, the Sig Sauer P320 ASP air pistol is a CO2-powered pellet and BB gun. It almost exactly mimics its centerfire cousin, and does in terms of exterior dimensions and feel. Being the same size and featuring the same forward rail, you can use the ASP with any holsters and rail-attached lights or lasers you may have. Make no mistake; it warrants all the rules of gun safety as it spits out .177 projectiles at speeds up to 430 feet per second according to the Sig Sauer folks. While eye protection is always a must, there’s no need for hearing protection, and if you set up in the garage or backyard, it’s unlikely that your pellets will penetrate exterior walls and annoy the neighbors. At first glance, it’s hard to tell which is air powered.

The P320 ASP is magazine fed and packs 30 pellets or BBs – your choice. It inserts like a standard pistol magazine but in the forward part of the grip. The remaining interior grip space houses the CO2 cartridge. The magazine well and grip backstrap easily pop off, allowing access to the CO2 cartridge compartment. A cylinder screw with a folding handle compresses the CO2 cartridge until pierced. When finished with a cartridge, just loosen the screw a few turns, and the spent canister falls free. The backstrap pops off to allow access to the CO2 cartridge compartment.

While the slide reciprocates on this pistol, the slide lock and release lever is cosmetic only because, well, you really don’t need that function. The same applies to the takedown lever. There’s one there, but only to look and feel like that on the centerfire P320. There is one other visible difference. The ASP has a sliding safety on the left side of the frame. Push forward to expose the red status indicator dot, and you’re ready to fire. Pull back, and the ASP is on safe. Other than that, one would be hard-pressed to tell the difference between the pellet and centerfire pistols. Well, there is that thing about a smaller hole up front, but you don’t want to be eyeballing that anyway. Here’s one other difference – the frame safety.

The trigger on the P320 ASP advances the 30-round magazine belt at the beginning of the press cycle. That means two things. First, you’ll feel some weight right as you start to press the trigger. Second, be aware that if you start a trigger press and then release before firing, you’ll skip a pellet since you advanced one into firing position with that tentative press. On the next trigger press, the magazine belt will continue forward, and another pellet will line up with the barrel. This is just something to be aware of in case you like to stage the trigger when shooting. The 30-round belt magazine is easy to load and inserts into the base of the grip.

The trigger press sensation is a bit different than the centerfire P320. There is constant weight and the shot fires at 6.5 pounds of pressure as measured by my trigger scale. The centerfire has more weightless take-up followed by a detectable break sensation. For practicing your trigger technique, the P320 ASP is just fine and feels like a cross between a light-double action press and a striker-fired pistol sensation.

The 30-round magazine of the Sig Sauer P320 ASP air pistol works with either .177 caliber pellets or steel BBs. I decided to try a variety of Sig Sauer pellets along with some bulk copper-plated BBs that I had handy. There are three styles of Sig .177 caliber pellets: Match, Wraith, and Crux. The Match pellets are wadcutter shapes with flat noses, great for punching holes in targets. The Wraith and Crux are really aimed more at rifle use, but they operate just fine in the P320 ASP too. The Wraith is a dome-shaped projectile while the Crux offers a rounded profile up front. All three pellet shapes are available in either lead, called the Pb line, or no-lead ballistic alloy. As you’d expect, the pellet weights vary widely between the lead and allow versions.

I wanted to see what kind of velocity the Sig Sauer P320 ASP air pistol delivered with the various pellet types, so I set up a shooting chronograph and proceeded to shoot and record. Given the reciprocating slide and the fact that some available energy is used to drive that, I wasn’t expecting hypersonic speeds. Nor is top-end velocity the relevant factor for this type of air pistol. Rather, I was curious as to how the varieties of lead and lighter ballistic alloy pellets would perform.

I shot slow strings of each ammo type, allowing about ten seconds between shots, so I didn’t chill the CO2 too much and skew the numbers with cold, low-pressure CO2. Here’s a summary of average velocity of each Sig Sauer .117 caliber pellet type.

While velocity testing was an excuse to shoot more while satisfying my curiosity, checking for accuracy was important for determining the P320 ASP’s usefulness for training, and of course, plinking. If you do your part and aim at a 1970s-era TAB can while exercising perfect trigger discipline, it had better dance, right? Accuracy was great for a trainer / plinker. Most shots from 10 yards went into one ragged hole.

I set up targets at 10 yards and used a sandbag rest for stability. Because I could, and because fun, I mounted a Crimson Trace CMR-206 Rail Master Universal Green Laser Sight. It clamped onto the P320 ASP’s rail in a minute or two and made my aiming job not only easier but far less dependent on my eyesight. I planned to shoot ten-shot groups, but after starting with the first set, I got carried away and ended up firing a 14-shot group. Hey, I figure if ten shots are representative of an air pistol’s accuracy, then 14 must be even better. To be consistent, I also fired 14-shot groups with the other ammo types. OK, I was having fun with those too. I tested both lead and ballistic alloy Match ammo and the Wraith Ballistic Alloy pellets. Here are the results measured by the center-to-center diameter of groups.

The Sig Sauer P320 ASP air pistol seemed to particularly like the Match Ballistic Alloy pellets. The best ten shots created one ragged hole at 10 yards. One other thing I did notice was that the point of impact was right through the front sight dot. In the photos, you might notice the group slightly left of the bullseye, but that was only because I didn’t exactly zero the laser to coincide with the iron sights. After testing this way, I’m leaving that laser in place so I’ll zero it perfectly with the Match pellets. If you are a four-legged rodent contemplating a move into my garage, consider yourself warned. Dimensions are identical to the centerfire P320 so you can use the same holsters and accessories.

Speaking of rail-mounted accessories, I’ve been tinkering around with a Crimson Trace CMR-202 Railmaster light on the Sig Sauer P320 ASP air pistol. Sure, that makes plinking fun, and if you have a nocturnal rodent problem, a rail light can make this an effective pest control too. However, it’s also a great way to learn how to use your lights in the dark. Depending on where you live, you might be able to train in low-light conditions in your garage, basement, or backyard. It’s much harder to find places to shoot safely in the dark when using centerfire pistols.

This is a fun pistol. The “joy of plinking” value alone is reason enough to buy one, but what really gets interesting is the potential practice and training benefits if you have a similar centerfire P320. As the Army’s new sidearm, I expect to see a lot of P320s in the commercial market before too long. Sig is going gangbusters to make CO2 versions of many of their popular pistols, so if you have a P226, 1911, or a P320 like this one, you can find an airgun that shares identical dimensions and surprisingly realistic feel.