You are here: Home / Features / Sig Sauer BB Pistols with Attitude: Come and Take Them 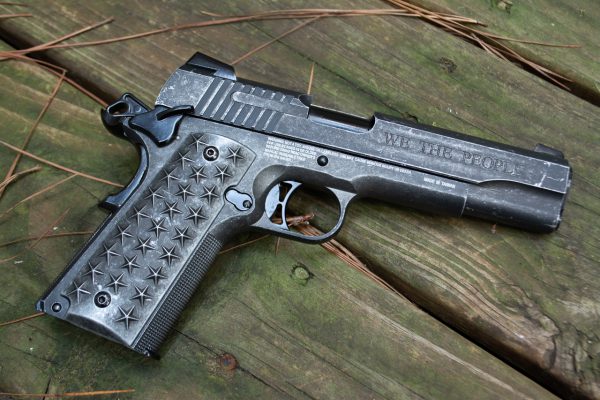 When in the course of human events it becomes necessary for one people to resort to serious “tough guy” language that will live on for generations to come, a couple of phrases of grit and defiance stand out.

One such maxim starts with the immortal phrase, “We the people…” As the first words of the preamble to the United States Constitution, those words serve as a bedrock underlying the concept of flipping a giant bird to tyranny and establishing “government of the people, by the people, [and] for the people.”

Another famous retort dates back to times when rough men wore sheets instead of metro rompers. “Molon Labe” (translation: come and take them, meaning our weapons) was what Spartan King Leonidas sent in response to the surrender request of Xerxes of Persia. That was back in 480 B.C., several decades before the birth of Senator Harry Reid. Anyway, the dramatic conclusion was punctuated by 300 Spartans and an additional 700 Thespians holding off 100,000 to 150,000 Persians for three days while the remainder of the Greek forces withdrew to fight another day.

I have to assume that it was with epic badassery in mind that Sig Sauer chose to make two super-cool BB pistols and name them the “We the People” and “Spartan.” Just to be clear, the Spartan has the phrase “Molon Labe” imprinted along the slide. Not surprisingly, the We the People pistol has that iconic phrase on one side and “1776” on the other. I’ve been checking these two pistols out for the past couple of months and felt it an appropriate time to share some details on these two recreational, trainer, plinker, CO2 pistols.

Both of these 1911-design pistols are designed to shoot 4.5mm BBs only, and both are built from actual metal. That’s awesome. As intended, they look and feel like the real centerfire fire and brimstone versions of classic .45 ACP pistols. Also like the real 1911 pistol, both of these models feature reciprocating slides. Yes, the recoil is certainly less, but you get the realistic sensation of a moving action every time you press the trigger. While both models feature removable magazines that drop from the bottom of the grip, they vary when it comes to functional details.

The Spartan accepts its CO2 cylinder through a lever-activated trap door in the grip. The removable magazine is for BBs only and holds 16. The We the People pistol, on the other hand, is designed from the ground up to offer realistic function as compared to the real deal. For starters, the metal magazine is full-width and contains both the BB supply (17 shots) and the CO2 cylinder. An Allen screw in the base of the magazine seats and pierces the CO2 cartridge. When you drop and replace a magazine with the We the People pistol, it’s a realistic thing. I should note that the magazine holds the air, so you can remove and replace CO2-charged magazines as much as you like without air loss. The other big difference you’ll experience with the We the People pistol is that it offers a realistic and as true-to-life as possible takedown procedure. The barrel bushing rotates and comes out. When the slide is placed in the takedown position, you can push the takedown and slide release lever out and remove the entire slide assembly. That’s kind of cool not to mention useful for the occasional cleaning.

While both pistols closely follow the 1911 form factor, they take different approaches for the cosmetic finish. The Spartan resembles a Cerakoted 1911 and features a polished finish except for the cocking serrations and checkering on the grip surfaces. It also features a Picatinny rail so you can easily mount lights and lasers. The We the People pistol carries a battle-worn appearance complete with simulated finish wear and three-dimensional stars on the grip surface. It looks and feels fantastic.

As for velocity, I did a couple of quick and dirty measurements. I wasn’t really concerned too much with scientific velocity measurements. Both pistols are CO2 canister powered and will launch BBs in the 300 feet per second range. And they did. The Spartan flung Crosman Copperhead BBs at an average of 282.8 feet per second and the lighter Dust Devil BBs at 346.4 fps. The We the People pistol fired Daisy Match Avanti BBs at an average of 303 feet per second. As fun pistols that double as excellent 1911 trainers, it really didn’t matter to me what the velocity was as long as they can hit their intended targets.

I did some informal accuracy testing at 10 yards by firing 10-shot groups to check out the Spartan air pistol’s suitability for at-home training. The first thing I learned is that I can’t count as evidenced by the 9 and 12-shot groups I measured. No matter, both still had enough shots to give you an idea of performance.

Sig Sauer includes a small bag of steel BBs to get you started. From a distance of 10 yards, those put 12 shots into 3.4”, with the best 5 going into a 1.4” circle. I also tried some Daisy Copper-plated BBs from this pistol. Those grouped nine shots into 3.8 inches with the best five coming to rest in a 1.9” circle.

As for the We the People model, I decided to shoot some Daisy Avanti Match BBs – the ones used at the recent Daisy National BB Gun Championships. From the same 10-yard range, I measured about 2.1 inches for 10-shot groups. Considering that the reciprocating action causes all sorts of commotion, that was just fine, and plenty accurate enough for training purposes.

These pistols are fun and based on the fit and feel, do not in any way, shape or form feel like toys. The combination of hefty metal construction, blowback actions, and slide lock after the last round is fired make them serious training tools in addition to fun plinkers.

We the People BB Pistol