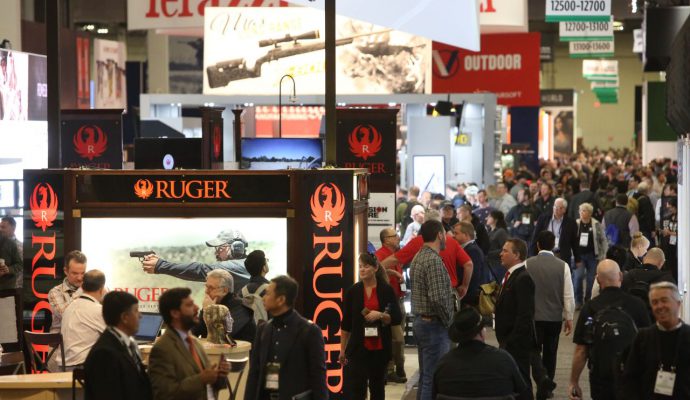 Hold on to your shorts. Grab a cup of Black Rifle coffee – that stuff will grow hair on your… pretty much anything. Find a comfortable chair. Ready? Good, because this the annual SHOT Show Edition of the Airgun Wire and it’s chock-full of new airguns and gear.

The Shooting, Hunting, and Outdoor Trade (SHOT) Show is the place to be if you like guns, gear, and enough people-to-people contact to give you the most persistent cold ever. It’s where all the industry manufacturers go to show their wares to retailers and media (75,000 of them) for the coming year. Envision if you can 12 miles of booths covering 16 acres of guns and gear including all the latest from your favorite airgun companies and you’ve got the idea.

We’ve got all the details below, but here are the airgun world highlights.

AirForce Airguns has been quiet recently, and we mean that literally. You may have read about the Condor SS we’ve been testing here and their Texan SS with an even larger hole in the front end. Now, the Texan LSS offers max power AND an integral suppressor for max silence potential.

The English are busy with new luxury models. Brocock is powering up its Bantam line with the new Patagonia and Magnum models, capable of delivering 46 foot-pounds in .22 caliber and 55 foot-pounds in the .25. Daystate is celebrating their Ruby (40th) anniversary with limited edition Pulsar bullpups with sexy laminate stocks. Not to be outdone in the high-end news department, FX has launched several new rifles in their Dreamline series. Check out the Dream-Pup below.

Don’t forget Hatsan. The new NovaStar is lighter than its predecessor but also includes a slew of upgrades like a more rigid free float barrel and new auto-indexing magazine system. Don’t worry, the single-shot tray is still available. Oh, and check out the new Vectis. It’s a lever-action (a very modern lever-action) PCP. Can’t wait to try this one.

Sig Sauer is moving to make all of their airgun and airsoft (catch that?) products in house while Umarex continues to solidify partnerships with center-fire gun companies. Can you say Smith & Wesson?

Last but not least, the world’s most powerful airgun, the Umarex Hammer will ship in March. 705 foot-pounds with a 500-grain lead slug anyone?

Oh, one more thing. We’ve added to the SHOT Show news-a-lanche with the launch of the all-new Outdoor Wire Weekend Edition Podcast. In about a half hour, we’ll catch you up on all the happenings in the outdoor life, shooting, airgun, and archery communities. You can subscribe here.

Until next time, stay tuned at airgunwire.com and social media. We’ll be there.