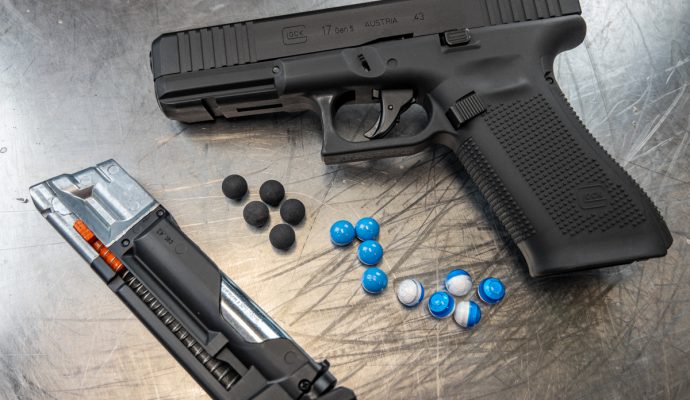 My wife is slightly miffed.

Strangely, this low-level frustration is a result of me painting the garage. And here, I thought proactive chore attacking was a good thing. I guess that shows how much I’ve learned after 34 years of wedded bliss.

Maybe it’s my color choice? Admittedly, Bleu de France Blue is somewhat non-traditional for garage use, but you’d think I’d get credit for the proactive effort. Perhaps it’s the random Jackson Pollock style she doesn’t care for. No matter, I’m continuing the project.

At long last, I’ve found a truly garage and basement-friendly airgun. Sure, many of us have set up home ranges somewhere in the house or perhaps in the backyard. A good bullet trap and responsible shooting practices make it a perfectly safe endeavor. But recently, I’ve been tinkering with an air-powered training (and fun) solution that won’t even dent the walls should any shots go errant.

The Umarex Glock G17 Gen5 T4E Paintball Marker is a .43-caliber “air pistol slash paintball marker” that looks and feels like the real deal. In fact, it’s the first product officially licensed by Glock. That means it’s dimensionally identical and will work with real-deal Glock accessories like holsters and rail-mounted accessories.

This pistol operates with removable magazines containing the standard 12-gram CO2 cylinder and room for eight .43 caliber projectiles. In a sense, it operates like a revolver inside, with the chamber being integral to the magazine. The air charge drives the next ball in line straight into the barrel when you fire.

As you might guess, the air supply is captive through magazine changes, so you can easily reload eight more shots using the same cylinder when you run dry. According to Umarex, you can get up to 90 shots per cylinder, but I’d be perfectly happy with a fraction of that.

As for power, the energy, as measured by foot-pounds, is somewhere between a Daisy Red Ryder-launched BB and a Crosman Pump Master pellet. Depending on the type of ammo, you might expect just under three foot-pounds. It’ll leave a mark.

The “ammo” offers all sorts of possibilities for recreation, target practice, paintball matches and more.

Semi-hard black rubber balls weigh in at about 11.5 grains. They’ll easily perforate a couple of layers of cardboard at handgun distance, so use them for target practice if you want to know precisely where your hits are going. I suppose they’ll work well for force-on-force training scenarios, too, provided you use all appropriate safety gear, primarily eye and face protection.

If you want to see impacts at a distance, try the powder balls. A blue and white powder is contained within a more rigid plastic shell that bursts on impact, making a visible minor explosive cloud. Very satisfying, and this doesn’t leave much of a mess in your target area, or at least nothing a broom or shop vac won’t pick up in short order. They weigh in at 10.2 grains, so they’ll move a bit faster.

Go for the blue paintballs if you want to channel your inner abstract expressionist movement painter. The coating on these feel more rubbery than the hard plastic shells of the powder balls, and they’re a bit heavier at about 10.5 grains. Filled with a small amount of bright blue paint, they’ll serve you well in paintball sports matches. If you’re prepared to make a significant investment in ammo, you can also paint your garage the fun way.

Whether you want to play or train, this is no toy — it’s a quality piece of gear that performs while entertaining. Check it out!