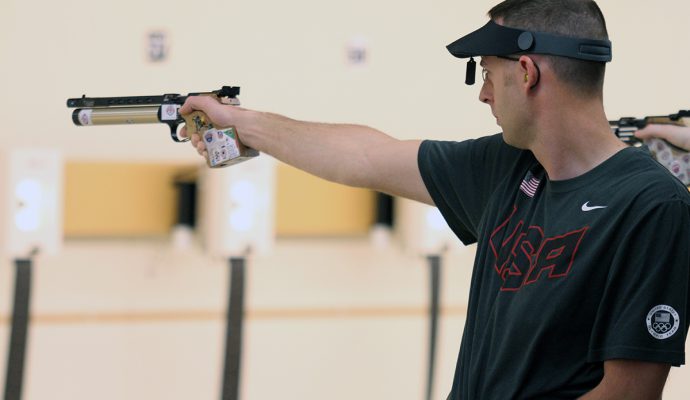 SGT Nick Mowrer has reached a milestone that no other American has – competing in more than one discipline at the Olympic Games. Mowrer is set to fire in 10-meter air pistol, 50-meter smallbore rifle and the 10-meter mixed air pistol team event in Tokyo.

“While it comes with a certain cool factor, the actual goal is much bigger,” he said of his historic feat.

Mowrer is making an Olympic comeback after eight years – last competing at the London Olympics in 2012 in 50-meter free pistol, where he finished 15th overall. This time, he looks to bring back his first medal.

At 32, Mowrer has saturated his impressive marksmanship career in a number of outstanding accomplishments. He became a Triple Distinguished athlete, a rare and honorable achievement, after earning his Distinguished Rifleman Badge in 2005, Distinguished Pistol Badge in 2013 and Distinguished International Badge in 2018. He joined the Army World Class Athlete Program (WCAP) in 2012 and is a resident athlete at the United States Olympic Training Center in Colorado Springs. Additionally, he’s a seven-time national record holder, a four-time aggregate collegiate pistol national champion and has been a World Cup medalist in both pistol and rifle.

Mowrer first made his name known as a junior when he earned the title of National Rifle Association Rifle Junior Champion at the Camp Perry National Matches in 2008. He also competed in many CMP Junior Highpower Rifle events, claiming the overall National Junior Highpower Rifle Championship and the Col. Bill Deneke aggregate in 2008 for his performances in the President’s Rifle, National Trophy Individual and Junior Team matches.

Mowrer’s interest in marksmanship originally sparked while growing up in Montana – fishing, hunting and shooting with his parents. They helped him develop a passion for precision shooting, and he was eventually introduced to highpower rifle competition before getting involved with bullseye pistol during the winter months. Unfortunately, there were no junior programs for pistol in his state at the time, but he was able to join the Cedar Hills Gun Club in nearby Idaho.

“The Idaho junior pistol program really helped me figure out what competitions I needed to go to in order to shoot at a higher level,” he explained.

With the club, he qualified to shoot at the Junior Olympics competition in Colorado Springs at the Olympic Training Center. He placed second and was automatically made a member of the Junior National Team – all in his first year as a competitor.

“It really laid the groundwork for where I am today,” he said.

Mowrer went on to become a member of the Montana State Association junior highpower program, leading him to the Camp Perry National Matches from 2005 to 2008. Outside of his several awards and recognitions there, he attended the CMP-U.S. Marine Corps Junior Clinic where he learned how to make better use of his sling and scorebook, among many other important lessons that would guide him throughout his journeys.

“The most valuable thing, I think, was being around the service men and women who were there and shooting with a full firing line of my peers,” he said of the memories he collected at the CMP Camp. “For whatever reason, that setting was beneficial to my general mindset.”

After high school, Mowrer spent a year at the Montana Tech engineering college in Butte, where he helped lead the team to its first National Championship in shooting. He then moved on to The Ohio State University before qualifying for the 2012 Olympics and relocating to Colorado Springs to train. While in Colorado, he enrolled in the nearby Pikes Peak Community College to continue his education.

“I like to tell people that I had a three-stop shop to my Associates Degree,” he joked. “I shot collegiate pistol for each of those schools, which was a fun experience for a lot of reasons.”

Coming home after the 2012 Games left Mowrer unsure of the direction he wanted to take his life, but he soon found a path that would allow him to progress his marksmanship training while opening doors to new possibilities.

“Being a very goal-driven person, I realized I wanted to join the Army,” he said. “I wanted a career, and I knew the Army could help me achieve those goals.”

Shortly after exiting his initial Army training, he found the WCAP. He applied to their Elite program and was quickly accepted as an international pistol shooter.

Pistol was his main focus early in his career, and it’s a discipline that continues to challenge him even today. But, Mowrer clearly doesn’t limit himself within the realm of marksmanship.

“To be honest, I just love shooting,” he said. “I even like getting on the shotgun range and occasionally will find myself launching some arrows.”

Admittedly, his “true love” is the discipline that got him to his first Olympics – 50-meter pistol. Unfortunately, the decision was made by the International Shooting Sports Federation (ISSF) in 2016 to remove the event from the Games. Luckily, his second love is 50-meter Prone Smallbore Rifle. He even won a bronze medal in the event at the 2014 ISSF World Cup. The placing made the thought of returning to the Olympic Team enter his mind, maybe this time in three-position rifle.

“I knew that I wanted to continue shooting, and the National coach at the time did not care for my air pistol abilities, so I decided to take on a new challenge – 50-meter three-position rifle,” he said. “Personally, I always looked at 3P (three-position) rifle as the pinnacle of the shooting disciplines. Much like free pistol, ‘free rifle,’ as it is called in 3P, is a very technical sport. I knew it would be a good fit, even though the entire world said it could not be done.”

After shooting 3P rifle for a while, Mowrer found that it actually paired quite well with air pistol.

“It was kind of like steak and lobster,” he joked. “Two very different sports, but they both shared fundamentals very well, and one gave me the time away from the other that I needed to properly train.”

He earned a place on the U.S. Tokyo Olympic Team for his third love, air pistol, in February 2020. After the rise of COVID-19, the smallbore Olympic Trials were cancelled and moved to May 2021 – giving Mowrer more time to prepare.

“The strangest part was the fact that the trials were held over a year apart from one another, due to COVID,” he said. “A lot can change in a year’s time, and I’d be lying if I said that the extra experience I gained in that time didn’t help me.”

With the additional training, Mowrer was able to remain confident in his equipment and abilities entering the smallbore Trials, which, evidently, made a positive difference.

“While having air pistol in the bag did help, I was very nervous at the rifle trials,” he confessed. “Olympic trials as a whole are an even harder set of competitions than the Olympics themselves, I think. They are just a weird beast, and there is no getting away from that.”

Obviously, he’s got a lot to focus on in Tokyo. With his robust training schedule leading up to the event and drawing upon his experiences from his last Olympics appearance, he looks to improve his performance on the range.

“These Games are much different than any other, of course, but I think my experience in 2012 will be largely beneficial to these Games,” he said. “There is a lot of down time, oddly enough, so one thing I will take forward is time management.”

Now in the Olympic Village, all that’s left to do is take all that he has learned and apply it on the firing line.

As he embarks upon the Olympic stage, he leaves the last word for his fellow marksmanship athletes, saying, “Keep up the work out on the range! Remember that the wind is an idea, the center is perceived and we’re all in it together.”

When to Watch Olympic Marksmanship Events: