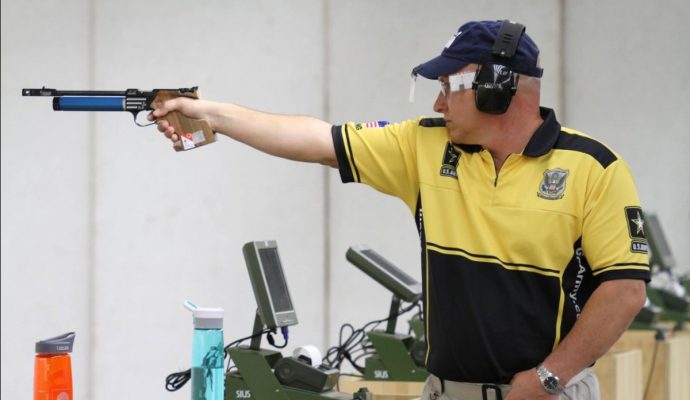 The Scholastic Action Shooting Program (SASP) proudly selects Jim Henderson as the Director of Development for newly established International Disciplines of 10 Meter Air Rifle, 10 Meter Air Pistol and Sport Pistol. A decorated marksman with approximately 67 national records including the President’s 100 Pistol Match, which he has also won 9 times. Henderson will expertly guide program efforts while advancing the SASP’s mission to promote youth development through shooting sports. Henderson brings expertise and experience from being a member of the US Army Marksmanship Unit and has been a competitor and instructor for over 30 years. Henderson, a former member of US National Team, has also served on the USA Shooting Board of Directors as the athlete representative and is the Civilian Marksmanship Program (CMP) Pistol Program Coordinator.

Henderson stated he is honored to join the SASP team and get to work growing youth shooting sports. “I am excited to see SASP trained athletes become future members of Team USA, and ultimately Olympic Champions.”

“We are confident that Jim Henderson’s expansive knowledge and experience in international shooting sports, both as a competitor and coach, will quickly establish our new air pistol, air rifle and sport pistol disciplines,” said SASP National Director, Rick Leach. “Jim’s experience with the CMP and USAS will help us as we work together with these groups to grow youth shooting sports in our nation. SASP is known throughout the nation as a premier youth shooting sports program and we will continue to uphold that reputation with our new international disciplines guided by Jim Henderson. As USA Shooting’s official youth feeder program, along with the selection of the SASP as the national governing body for the Intercollegiate Pistol Program, made up of a large group of NCAA schools, we are absolutely thrilled to add Jim Henderson as our new Director of Development for International Disciplines to further capitalize on this momentum.”

The Scholastic Shooting Sports Foundation (SSSF) is 501(c)(3) public charity responsible for all aspects of the Scholastic Clay Target Program (SCTP) and Scholastic Action Shooting Program (SASP) across the United States. The SCTP and SASP are youth development programs in which adult coaches and other volunteers use shooting sports to teach and to demonstrate sportsmanship, responsibility, honesty, ethics, integrity, teamwork, and other positive life skills. The mission of the SSSF is to provide and enhance personal growth and development opportunities for student athlete members; become the premier authority in all things pertaining to firearm-related pursuits for youth; pass on to future generations the legacy of lifelong, safe, responsible enjoyment of the shooting sports. This includes serving as a feeder/pipeline for organized, sanctioned shooting organizations and teams.