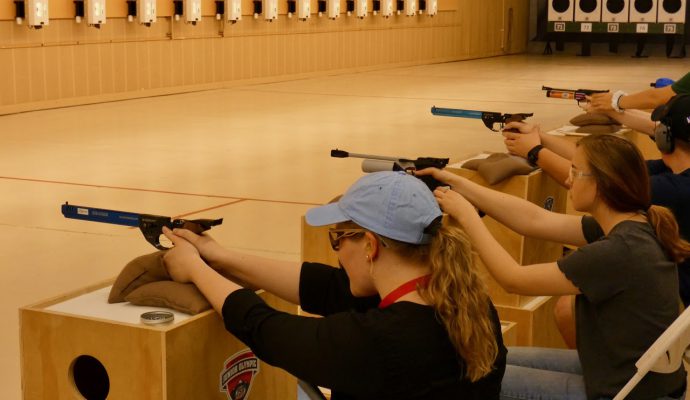 For action shooters the athletes picked up the Olympic disciplines quickly. Before they left the Olympic Training Center 8 of 12 athletes shot 10M Air Pistol scores that would have qualified them last year to be invited to the Junior Olympic Trials for a chance to make the United States Junior Olympic Team. Coach Jim Henderson stated, “In all my years of coaching I have never seen a group of athletes pick this up so quickly, and then perform at this high of a level.”

Congratulation to the following SASP athletes who applied and were selected to attend the SASP 2019 JODC.

SASP coaches and staff also participated in an international discipline coach’s clinic on May 22 and 23 before helping coach the SASP athletes upon their arrival. Russell Gilkison VA, Samantha Engle MI were the coaches that participated in the coach program. SASP is excited to watch as these athletes continue to participate in the International disciplines with hopes of one day seeing one of them standing on the podium and the American Flag is raised as they represent our county in international competition.

We look forward to again holding a JODC in 2020.

SASP would like to thank USA Shooting, especially Brent McPherson and Jim Henderson for their coaching and working with us to provide this great opportunity for our athletes. We would also like to thank the US Olympic Training Center for their hospitality.