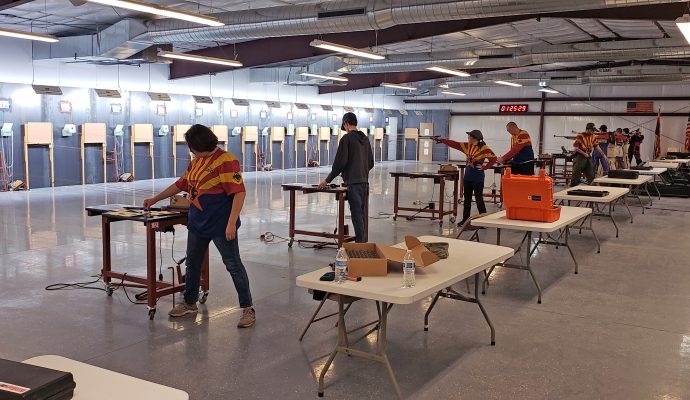 With the recent addition of international air disciplines to the Scholastic Action Shooting Program (SASP), Arizona teams were eager to participate in the USA Shooting Arizona State Pistol Championship on Tuesday December 29th at the Rio Salado Sportsman’s Club in Mesa, Arizona. Many of these SASP athletes had competed in action shooting matches for years but were new to international-style pistol matches.  With only one month to prepare, three teams practiced for the event, with ten athletes choosing to compete for the State Championship. With years of muscle memory tasked for speed, these young action shooting athletes had to slow things down and hit very precise shots at the Olympic 10M pistol event.

Instead of multiple steel target arrays, international-style pistol matches require the athletes to shoot from the standing-position, one-handed at a target with approximately a one-inch “10-ring”, located 32’ 9.7” away. The equipment the athletes use and method of match preparation is also very different from action shooting. Olympic air pistols were borrowed, practices scheduled, guns zeroed, familiarization with the rules and new performance routines were learned by these athletes. When the athletes are on the firing line, coaching is not allowed, so coaches must properly prepare their athletes ahead of time with the full knowledge they are going to need during the match.

After the fast, but focused month of preparation, it all came down to the 60-shot, 90-minute match of the USA Shooting Arizona State Pistol Championship.

Currently, 46 states have USA Shooting rifle matches and 30 states have USA Shooting pistol matches.  With SASP’s addition of 10 Meter Air Rifle, 10 Meter Air Pistol and Sport Pistol, youth athletes throughout the country can experience the excitement of team-based shooting sports in both the wildly exciting sport of action shooting and the disciplined precision of international air disciplines. As the Official Youth Feeder Program for USA Shooting, the SASP gives opportunities, including Junior Olympic Development Campsfor young athletes to pursue their Olympic dreams. With the recent addition of Jim Henderson as the SASP Director of Developmentfor International shooting, the SASP is demonstrating its commitment to create more shooting programs for our youth. Henderson stated that he will, “bring more youth to the fun side of precision shooting.”

The Scholastic Shooting Sports Foundation (SSSF) is 501(c)(3) public charity responsible for all aspects of the Scholastic Clay Target Program (SCTP) and Scholastic Action Shooting Program (SASP) across the United States. The SCTP and SASP are youth development programs in which adult coaches and other volunteers use shooting sports to teach and to demonstrate sportsmanship, responsibility, honesty, ethics, integrity, teamwork, and other positive life skills.The mission of the SSSF is to provide and enhance personal growth and development opportunities for student athlete members; become the premier authority in all things pertaining to firearm-related pursuits for youth; pass on to future generations the legacy of lifelong, safe, responsible enjoyment of the shooting sports. This includes serving as a feeder/pipeline for organized, sanctioned shooting organizations and teams.