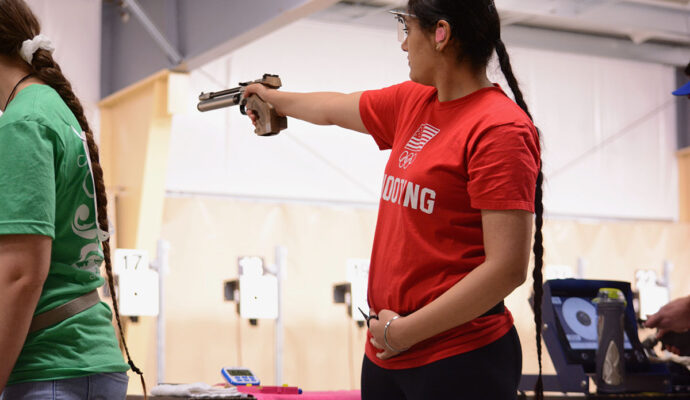 CAMP PERRY, Ohio – Suman Sanghera, 16, of Great Falls, Virginia, was the leading junior air pistol athlete at the 2022 Camp Perry Open – held over the weekend of May 13-15. It was only her second time attending the annual event, but through her strategy of treating every match like a practice, she was able to stay focused solely on her process and remain, ultimately, ahead of her peers.

“Going into this one, I had just gotten out of finals week, so I wasn’t training as much every day,” she said of her time leading up to the Camp Perry Open. “I just had the expectation that I was going to go, shoot and I was going to learn something.”

The Camp Perry Open features three-position precision/sporter air rifle and smallbore matches as well as 60 shot air rifle and air pistol competition, split into Open and Junior categories. The event is hosted by the Civilian Marksmanship Program (CMP) at the indoor Gary Anderson CMP Competition Center and the outdoor Petrarca Range – both located on the grounds of Camp Perry. Each event includes qualifying rounds, followed by an elimination final that determines overall winners.

Suman was the front-runner of the pack after the qualification rounds but fell slightly after the start of the final. She surprised her fellow competitors by again rising to the top of the leaderboard – executing a series of excellent shots that kept her in the lead through the last shot of the match.

“I looked at my scoring monitor and saw I needed a sight adjustment, so once I made that and started shooting a couple of tens, I just knew what I was doing. I was in some sort of rhythm,” she said. “I just kept going with that.”

Suman has been competing in air pistol for over four years now after entering the sport to follow in the footsteps of her older brother, Bhavjeet – another talented air pistol athlete. Before Bhavjeet entered college, the pair practiced together regularly but now meet on the firing line at competitions, like at the Camp Perry Open where both participated in the 60 Shot junior final.

“It’s great because I have a person with me every time I go,” Suman said. “It’s like a support system. We build each other up.”

Suman has earned a number of medals in 10m Women’s Air Pistol over the last few years, including gold at the 2019 Jr. National Progressive Pistol Championship, bronze at the 2019 Jr. Winter Air Gun Championship as well as gold at the 2020 Winter Air Gun event. She is currently on the National Junior team – hoping to one day move on to the National Team to compete in larger international competitions. She also has a goal of one day competing on a college team.

Outside of the 60 Shot junior match, Suman finished eighth overall in the Open competition and took third in the 38-person Super Final held on the first day of the 60 Shot event.

“I learned quite a bit,” she said of her experience at Camp Perry.

In junior air rifle, James Shipley, 16, of Williamstown, Virginia, led overall as Logan McClimans, 17, of Jamestown, Pennsylvania, dropped just short for second. Alok Joarder, 18, of Mansfield, Massachusetts, who will also be a member of the Murray State collegiate team in the fall, earned third.

Muske also led the field of three-position smallbore rifle competitors going into the match’s elimination final, with his teammate, SGT Patrick Sunderman, 27, trailing by only five points. After all firing in the elimination final was complete, Muske was bested by Sunderman who stayed ahead by just 0.6 points. Fellow USAMU member SP4 Levi Clark, 23, earned third in the event.

In 3×20 precision air rifle, Braden Michalak, 15, of Canton, Michigan, edged out the first place position by one-tenth of a point. Earning second was Diane Heschel, followed by Logan McClimans in third.

“I was nervous, but I’m glad it was against my teammates because I know them,” Jackson said, with seven of the eight athletes in the sporter final cadets from Zion Benton. “I’m also glad they made it into the final.”

A senior, Jackson will soon graduate with the hopes of enlisting in the Navy.

Another event exclusive to the Camp Perry Open is the anticipated Super Final – featuring costumes, music and other attention-grabbing effects that bring fun to the match. During the Super Final, the top 38 competitors from each of the day’s air rifle and air pistol qualification round meet on the firing line to compete in an intense elimination event. The competition goes on until only one athlete remains standing. Winning this year’s Super Final in air rifle was SP4 Levi Clark, as Charles Platt, 24, of Colorado Springs, led the air pistol category.

Team events were also held concurrently with the 3×20 air rifle and 60 shot qualification matches during the weekend. Winning teams included:

View a complete list of results for the 2022 Camp Perry Open at https://ct.thecmp.org/2022CPOresults. Photos of the event can be viewed and downloaded for free on the CMP’s Zenfolio page at https://cmp1.zenfolio.com/f820087878.