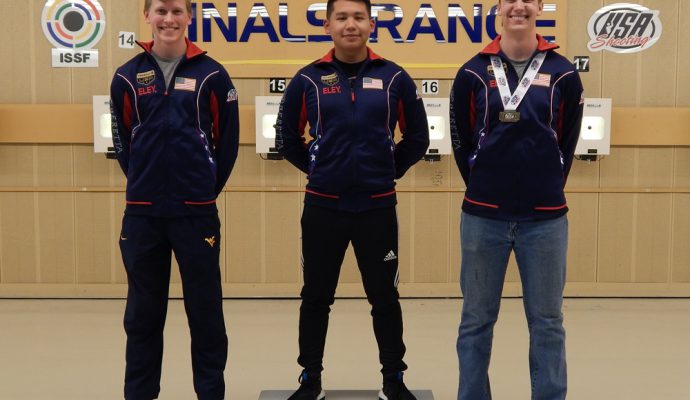 Matthew Sanchez picked up his second medal this week at the National Junior Olympic Shooting Championships (NJOSC), but this time he was atop the podium today, winning gold in Men’s Air Rifle at the Olympic Shooting Center in Colorado Springs.

The high school junior from Tampa, Florida entered the Final with the highest two-day Qualification score of 1245.8 Though he finished in seventh place in today’s Final (Additional points – four for first, 3.5 for second, three for third and so on –  were awarded based on finish in the Final), Sanchez was able to keep the gold from Finals winner and eventual silver medalist Jared Eddy (Midland, Georgia), who shot an impressive Finals score of 247.2. The West Virginia freshman’s Finals win also featured three, 10.9 shots – two of them occurring in a row. A 10.9 is a perfect shot in international rifle or pistol. As this was a selection match for the International Shooting Sport Federation (ISSF) Junior World Cup in Germany this summer, all athletes shot two Qualification matches and were selected for the Final based on cumulative points. Medals were awarded on the total points from Qualification and Finals finish.

“I had a little trouble with air right before the match, but I managed to sort things out,” Sanchez said. “Once the first day hit, I had my stuff together and was able to put up a really good score.” Sanchez, 16, departs for Beijing, China in one week where he will compete in the ISSF World Cup.

“This was like my third or fourth time out here and I remember coming in first as a J3,” Sanchez said. “I was looking at all these people and seeing how good the competition was, then fast forward a couple years to now, I’m now one of the top-10 consistently and it’s been a long journey! It’s definitely been a good, long trip and I was feeling good for this one after the Spring Selection Match.”

Air Force Academy sophomore Nate Peterson (Sharpsburg, Georgia) finished second in the Final and took the bronze medal overall. The top-three overall finishers not only won medals, but appointments to the National Junior Team, along with their berths at the ISSF Junior World Cup.

The 172 athletes competing in Men’s Air Rifle won their chance to compete at NJOSC because of their finishes at the state-level Junior Olympic matches. Overall, 607 athletes from 48 states will compete in Rifle, Pistol and Paralympic events throughout the three-week NJOSC. The NJOSC features the top 34 percent of all competitors in 2019 and will feature invitees that either won their state championship or were selected based on a score they attained.  The competitors range in age from nine to 20 years old.

View and download images from the Men’s Air Rifle competition at NJOSC: https://flic.kr/s/aHskQpM4RB.